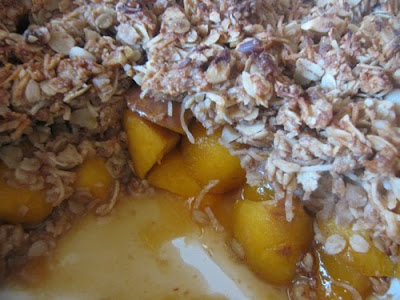 I've decided peach crumble recipes are like taxis. You see they everywhere but when you want one they are thin on the ground. I often admire stone fruit recipes but don't cook them often because I prefer to eat fresh stone fruit. Recently I found some peaches in the supermarket that were a bit grungy so I decided it was time for some baking. 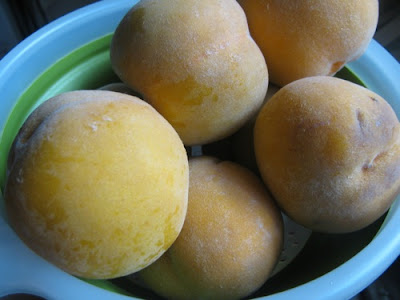 When I decided to make a crumble, I couldn't find the right recipe. The best I could find was Heidi's Plum and Peach Crisp. I fiddled with the recipe to make it barely sweet and topped with chunky crumble, full of nuts, coconut and oats, that was more akin to muesli than dessert. 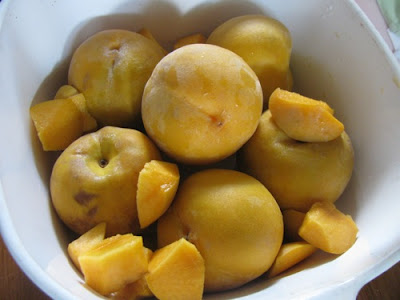 Sylvia hadn't been happy in her swimming lesson that morning and came home in a grumpy mood. She needed attention. I chose distraction. Much of our bench space had disappeared into the black hole of renovations. I washed the peaches and sat on the floor with Sylvia while I chopped them. I'd bought them for baking because I didn't fancy eating them fresh. Ironically as we prepared the crumble, Sylvia and I had a lovely time eating chunks of peaches. 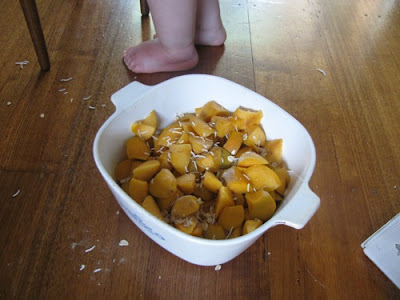 I made the crumble in the afternoon so Sylvia could have some after dinner. It seemed a good way to get some extra nutrition. She enjoyed the crumble topping but wouldn't eat the cooked peaches. I was surprised and wonder if she will embrace baked fruit desserts in the coming winter the way she did last year. E wasn't keen on it either.

That left me with a lot of crumble. I enjoyed it over quite a few nights, also having a small bowlful for the occasional snack. I was disappointed that the peaches weren't soft and falling apart. Perhaps they weren't quite as ripe as intended by the recipe, though I cooked it almost twice as long as Heidi stipulated. I have seen some recipes directing to cook the peaches for some time before adding the crumble and I think I may do this next time. 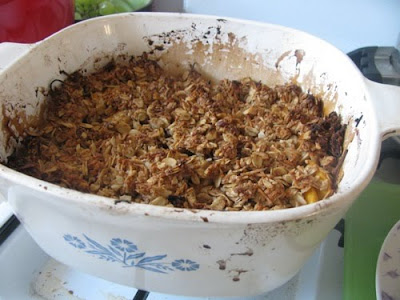 I was interested in Heidi's method of stirring melted butter and yoghurt into the dry ingredients, rather than rubbing cold butter in. The topping was not as crisp as I like but it had lots of good stuff in it. I would not claim it is my favourite crumble but I am pleased to have finally made a peach crumble. I had no problem with having to eat most of it myself. Now I look forward to more experiments.

I am sending the crumble to Cinzia of Cindystar for Weekend Herb Blogging #276, the event coordinated by Haalo and founded by Kalyn.

Cut the peaches into bite-sized pieces (about 1 inch) and place in a casserole dish. Mix together honey, malt syrup and cornflour in a small bowl and stir into the peaches in the dish. If your peaches are not ripe and soft, I suggest placing this dish in the oven for about 10-15 minutes, though I didn't do this.

To make the topping combine the oats, flour, coconut, nuts, sugar, cinnamon and salt together in a medium bowl. Stir in the butter, and the yogurt and mix until combined into a thick dough-like batter. Sprinkle over the peach mixture.

Bake for about 30-40 minutes until the crumble is golden brown. Serve warm or at room temperature. Keeps well for a few days in the fridge.