Teatime and tales - for the young at heart 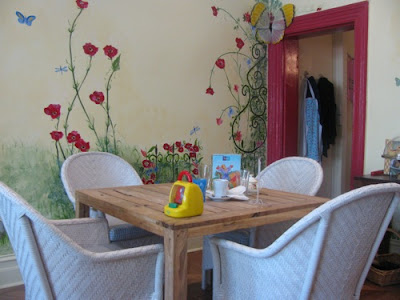 Teatime and tales has closed

It was Sylvia's birthday last week. We went to the park, the supermarket, bought new clothes for Baby Doll and then headed to Teatime & Tales for lunch. I chose Teatime & Tales because it appeared child-friendly but I was pleased to find it also appeals to adults. 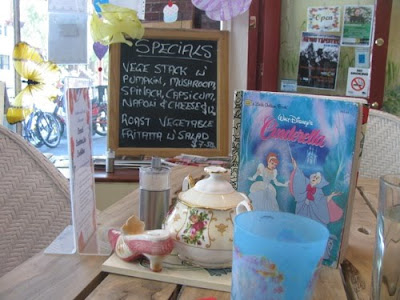 My first impression was the colourful wall murals that make the place seem incredibly pretty. Then I looked at the menus and chose a table by the window partly because it had a Cinderella golden book. It was the Disney version of the story that we had on a read-along-book in my childhood. The read-along-book came with a narration on 7 inch record where Tinkerbell rang her bell when it was time to turn the page. So it filled me with nostalgia and it was all I could do not to break out into a rendition of Bibbity Bobbity Boo. 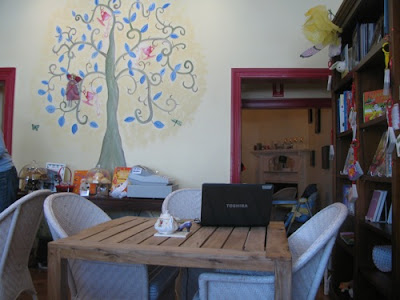 The place is one of the most child-friendly I have encountered. Highchairs are available, pillows are on offer for nursing mothers and you can ask for your baby puree to be heated in the microwave. The menu has sections for babies, children and adults. In addition, there is a calendar of events for kids and toys to play with. 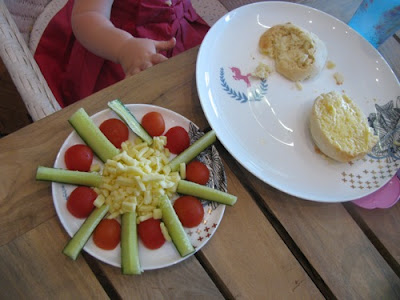 What really made the place child-friendly was that they were ready to accommodate Sylvia's peculiarities. I ordered a scone and asked for a plain salad. The scone was a tad sweeter than I expected but Sylvia enjoyed it. I buttered it for her. She turned it upside down and grabbed chunks of scone to stuff in her mouth. The salad was presented with style but Sylvia only ate the cheese.

I chose the vegie stack from the specials. It came a long time after Sylvia's but I discovered that the bookshelf had novels and cookbooks as well as kids books. In fact Teatime & Tales is a bookstore as well as cafe. So I enjoyed browsing while she picked at her food. Wifi and the hire of laptops or printers are also available. 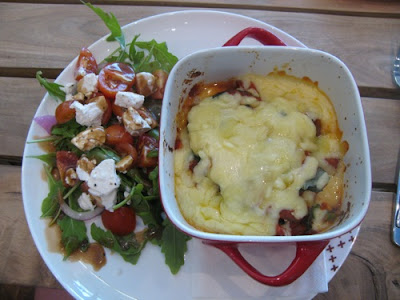 The vegie stack was more of a bake than a tower but very tasty. Unfortunately the eggplant wasn't properly cooked, but the pumpkin, mushroom, capsicum, and spinach were all nicely cooked under a very generous blanket of rich tomato sauce and cheese. I even stole a little scone to soak up some sauce. The side salad was an excellent mixture of rocket, tomato and feta in a balsamic vinaigrette.

I hope to return. The menu had some interesting salads and pizzas that I'd like to try and I enjoyed the pretty decor. Sylvia would return just for the chance to play in the outside area. It wasn't easy but I managed to drag her away so I could take her home to have a nap while I baked her birthday cake.


Teatime and tales has closed
Posted by Johanna GGG at 19:59