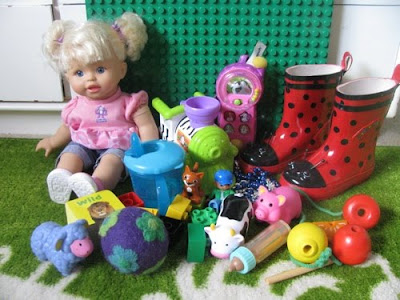 This was going to be a quick post about how easy these cheeseymite scrolls with puff pastry were. Then I made some other easy chickpea burgers. Then I thought it might be nice to do a little Sylvia update given that her 2nd birthday is coming up. The brief post grew and grew and grew! 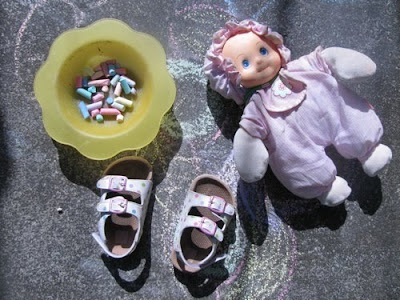 As her second birthday draws near in the next few weeks, I have been thinking about how much has changed since her first birthday (see my two lists of firsts before then). She is no longer a little baby. She runs when she wants to get somewhere and tells me what she wants (bikkies!). 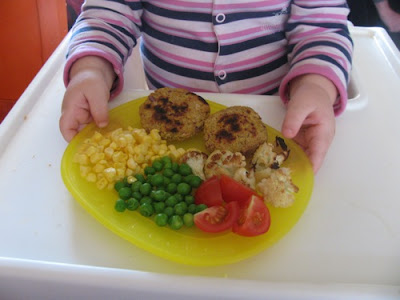 Today we saw a dietician as part of a routine medical appointment. It was a relief to finally speak to someone who could talk to me reasonably about a child's vegetarian diet and be reassured that her iron intake seems fine without needing supplements, though I was recommended to put her on calcium supplements because she is not keen on dairy products (or fortified vegan alternatives). So I feel reassured 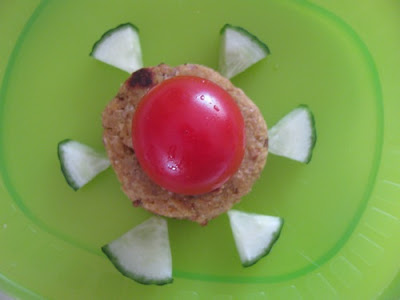 Above is a vegetable flower with a chickpea burger at its centre. Unfortunately Sylvia was more interested in the tomato and cucumber than the burger but she did take a few bites of burger on the first night I served them to her. Though even on the first night once I served my own with apple and cranberry chutney, she ate it off the top and kept asking for more jam. 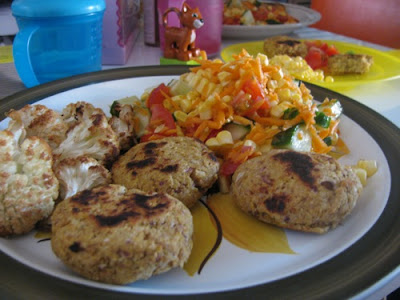 The recipe was inspired by Jacqueline's chickpea and coriander patties that she made for her little boy, Cooper. I made quite a few changes because I had a sourdough loaf to make into breadcrumbs, I don't like fresh coriander and I thought an egg would add a bit more nutrients. They were good everyday food that E and I enjoyed but Sylvia wasn't that keen. 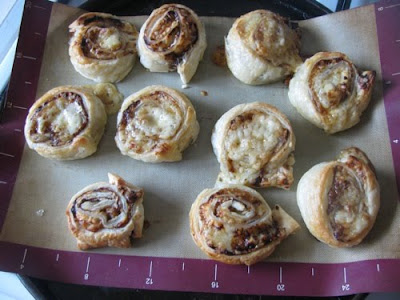 More successful were my recent attempts at cheeseymite scrolls. I had been inspired by Lisa's recipe as part of her great Australia Day recipes series. I have also seen similar scrolls or pinwheels on Should You Eat That and always meant to try it. Now that I am on a scroll roll (ha ha) it was on the cards. 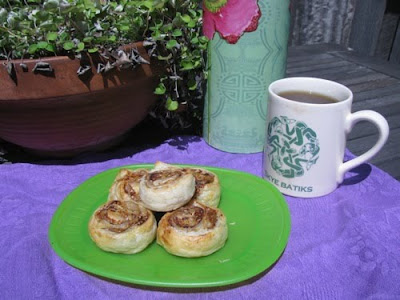 The reason I wanted to try the puff pastry cheeseymites was when faced with paying out for scrolls for everyone on the weekend at Bakers Delight. For those that don't know the BD franchise, cheeseymite scrolls are one of their regular items, bread dough rolled up with vegemite and grated cheese inside. (A photo of these scrolls is the fourth photo down from the top of the post.) I buy them often but when everyone in the house wants them the price adds up.

Then I remembered seeing Lisa making them. They were so simple and quick to make. Sylvia couldn't get enough of them - not even after they had sat in the bikkie tin over night. I used promite instead of vegemite and used up some old sheets of puff pastry in the freezer. I often have puff pastry leftover so this is an excellent recipe to use it up. They are smaller and richer than their bready cousins but they taste so delicious. Maybe another batch will be made on Sylvia's birthday!

Defrost puff pastry sheet. Spread with promite and sprinkle with grated cheese. Roll up and cut into 1-2cm slices. Arrange on a lined baking tray and bake at 220 C for 15 minutes or until golden brown.

Place chickpeas, breadcrumbs, red onion, buttermilk, egg and curry powder in food processor and processor til it all comes together. Form mixture into small patties. Heat a non stick frypan and spray with oil spray or pour in a glug of olive oil. Fry patties over medium heat for a few minutes either side. Cook in oven for about 20-30 minutes (mine was on the bottom of the oven for about 30 minutes). Serve warm with relish.

On the stereo
The Bestiality of - The bonzo dog doo-dah band
Posted by Johanna GGG at 21:55