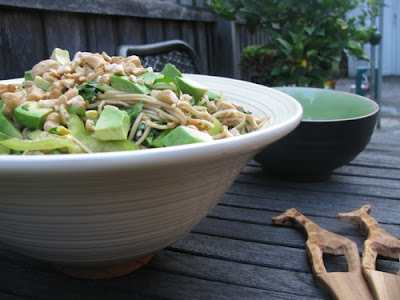 Sylvia is enjoying cooking lately. She can often be found outside making sand pies in the sandpit or running around with her little saucepans of water. She loves stirring and patting. This week we even found her giving Zinckie a frypan for cooking. Zinc was not amused. 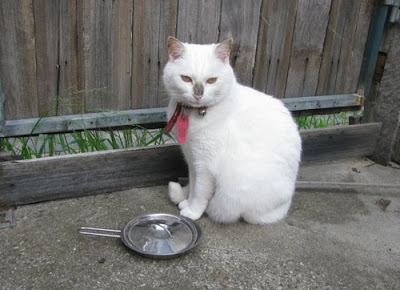 I haven't been "cooking" much. Blame the weather! This week, when I decided to make chocolate brownies to take into work, it was so hot that I didn't want to turn on the oven. I ended up making grubs and cheese and apricot balls. So later in the week when it was almost 40 C, I chose a nice cool soba noodle salad and by the time we ate, the cool change had arrived. 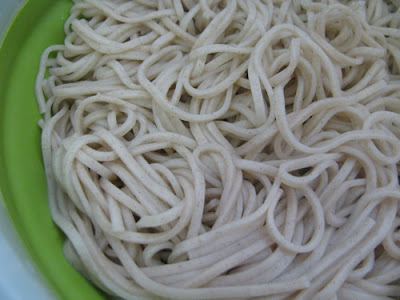 No matter, the salad was lovely. Sylvia was having such a lovely time outside that we ate in the yard with her. I've tried soba noodles a few times and they always seem a bit mushy. This was one of my most successful attempts to date. I enjoyed a dressing that wasn't creamy. The avocado gave enough creaminess to the meal. 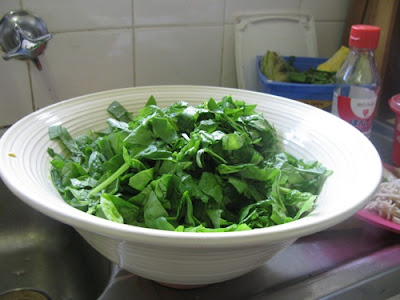 I did make the mistake of cooking too many noodles because I found that I had quite a few bits and pieces of packets leftover from previous meals. Fortunately I also added a few more vegies. You can see in the photo of the greenery in the bowl above just how many vegies were already in the salald bowl before the noodles and dressing were added. It made a large and satisfying amount of salad. Perfect for a hot day, if the cool change doesn't reach you first. 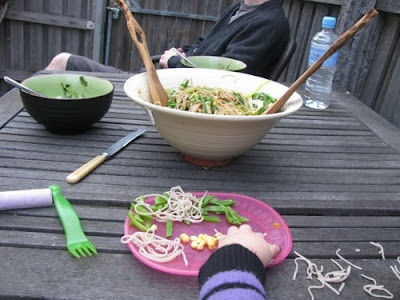 I made this from my Low GI Vegetarian Cookbook for the Cookbook Challenge 2011. This fortnight the theme is rice or noodles. See what others found in their cookbooks on this theme at the community page. Mix dressing ingredients together and set aside. Cook soba noodles according to the packet (mine said 4 minutes in boiling water), drain and rinse under cold water. Add remaining ingredients and toss to mix together with dressing.

Update: the salad kept in the fridge overnight and was lovely the next day but we still had a little over which was unedible on the third day.

Update April 2012 - made this with the vegies in the fridge (no avocado) and 1 lime and 1 tsp maple syrup instead of the mirin - worked well though I missed the avocado.   I also used less soba noodles (180g) which was plenty.

On the Stereo:
The exotic moods of Les Baxter: Les Baxter
Posted by Johanna GGG at 20:16