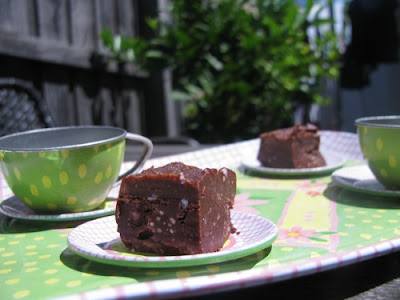 You could be mistaken for thinking I spend my days finding new ways to add nuts into chocolate concoctions. Today's recipe seems like covering ground that has been well trodden on my blog lately but it is just such a good variation that I had to share.

This chocolate cashew fudge was found via Lisa's amazing raw berry cheesecake. The cheesecake was a bit too ambitious for me but I did find a raw chocolate fudge on the My New Roots blog from where it originated. Not only did it look excellent but it seemed a tidy way to use up the rest of the coconut oil and cashew butter in my kitchen. These are the sort of foods that just add clutter and I forget to use.

In addition I have been particularly hungry lately after starting to ride my bike to work again lately (on the days when I am not ferrying Sylvia about). It actually happened after our car broke down recently. There wasn't much wrong with the car (phew!) but it did need some time with the mechanic. Hence I suddenly found myself going from four wheels to two to get to work. I have been enjoying riding my bike so much that I actually was a little glad that the car broke down. But it sure does make me hungry. 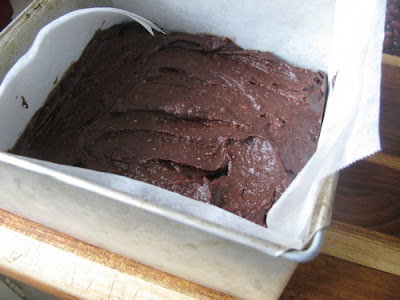 Leftovers, biking and some previous successes with chocolate and nuts. How could I resist this fudge! Oh, and it was just so easy to make at the end of a day of work, riding my bike home and then running around after a giggling cheeky toddler. I was even too lazy to put it in cups and I just froze it in a cake tin and chopped it up later. I didn't even take photos until the next day.

After refridgerating a jar of coconut oil that then needed an ice pick, I left my latest jar on the counter. It was fascinating to watch the changing colour as the oil melted into a clear liquid in the heat and then solidified into a white "butter" on the cooler days. It was exactly the right consistency for hand mixing coconut oil and cashew butter on the couch while I watched the telly. I changed the quantities to suit what I had on hand. I was feeling stingy and used less maple syrup than required but I was glad of my meanness because I didn't need all that sweetness. 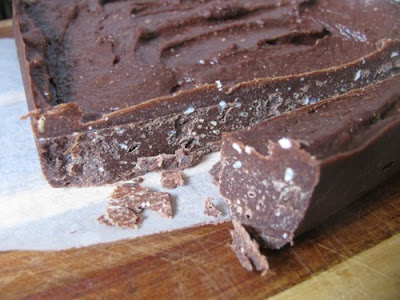 The resulting fudge is good enough to eat off the spoon but here was the claim on My New Roots that really fascinated me: "The best thing about this chocolate is that when you use whole, natural ingredients, your body knows when it has had enough." Wow! My body usually tells me that there is no such thing as enough chocolate. But I think that there is a definite limit for me when it comes to coconut oil. The fudge is deliciously creamy with a little texture from the cashew butter but I did find that I didn't crave it like I often do with sweet treats.

On another nutty topic, I have been fascinated to see a few bloggers referring back to my nut roast passion recently, and pleased to see them sharing my enthusiasm:
Is there something in the air? Makes me wonder if it is time for a Neb at Nut Roast II event to share some more nut roasts.

Previously on Green Gourmet Giraffe:
This time last year: Baking: the good the bad and the healthy
This time two years ago: Frozen Fruity Fun with Icy Poles
This time three years ago: WBB Microwave Muesli

Mix coconut oil and cashew butter together, preferably by hand. Add 1/3 cup maple syrup and mix. Add cocoa and add more maple syrup if needed. Add salt and any spices that you desire. I meant to add spices but forgot. Spoon into lined cake tin (I used my 15cm square tin) and bung in the freezer until firm. I left mine overnight. Cut into small squares and store in the freezer. Eat straight from the freezer and swoon!

On the Stereo:
Write about Love: Belle and Sebastian
Posted by Johanna GGG at 14:33