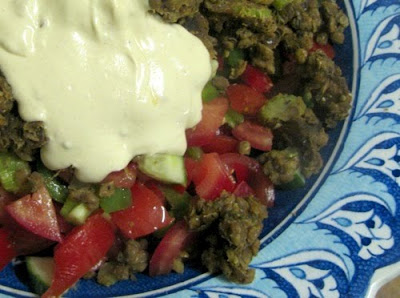 I didn't make this creamy lentil and date salad on Friday because the car broke down. Instead Sylvia and I had chippies at Sea Salt in Carlton while we chatted to a friendly stranger and then caught the tram home. It was not an evening for cooking. Instead I made the salad the next night. I loved it on Saturday. I served it with a creamy soup and the salad seemed the winner of the two recipes. I was intrigued when I saw Trudy's recipe on Veggie Num Num. Dates and lentils seem a good combination but it is an unusual one in a salad. Since my raw brownie failure, I have now found where I can buy medjool dates locally. They landed in the frypan of lentils in a large clump and were loathe to separate. The lentils were not as I had expected. They were dry and looked unappealing. The dressing was also a little dry. I find that yoghurt just dries out tahini so I added a bit of water which made it creamy but maybe a bit too liquid.

Fortunately, I was more successful with creating a spice mix to use in lieu of Trudy's Greek spice mix. This is a salad of many parts that come together to create an amazing combination of sweet and spicy, of crunchy and creamy. 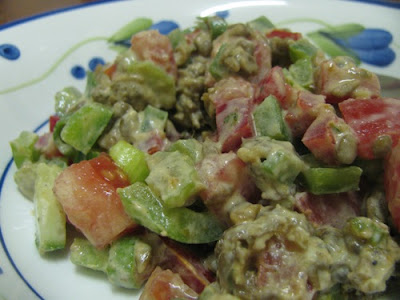 The salad did not come together quickly. Not much does in my life right now. I made the salad in between keeping a watchful eye on Sylvia, feeding her dinner and getting her ready for bed. The phone rang. The Greek neighbours had a noisy party filled with plate smashing and oompa! There was an item on the news that I wanted to concentrate on. Another neighbour knocked at the door to borrow my tin of cinnamon. So it will not surprise you when I say that my salad did not present beautifully like Trudy's nor did I use any garnishes. By the time I served dinner, I was ready to sit down and eat.

We had the leftovers the next day straight from the fridge and it was not as good. This salad is best eaten at room temperature. I served it with soup but all it really needs is a good loaf of bread or maybe some brown rice to make a meal.

I am sending this salad to Jacqueline of Tinned Tomatoes for the No Croutons Required blog event that she hosts with Lisa of Lisa's Kitchen. This month the theme is creamy salads or soups.

Heat olive oil in a frypan and cook lentils and celery in oil for a few minutes. Add dates and herbs, spices and salt. (My dates were really clumpy so maybe I should have separated them and scattered them in the frypan.) Cook another 1-2 minutes until lentils are dry. Set aside.

Prepare dressing by mixing all ingredients together. Add a little water to make the mixture creamy, if necessary.

Mix tomatoes, capsicums, cucumber and spring onion in a large bowl. Top with lentil mixture and dressing. I mixed mine to serve but Trudy served hers with layers of vegetables, lentils and dressing.

On the Stereo:
Peaceful Snow: Death in June
Posted by Johanna GGG at 20:05