Once upon a time I thought I liked to drink regular tea. One of my favourites was Earl Grey tea. There was nothing like a cup of tea to warm me up. But I liked my tea weak. So weak that people used to joke I only needed to wave a tea bag over the cup. After a while, I discovered that I didn't like the taste of tea with tannin. I switched to herbal tea. 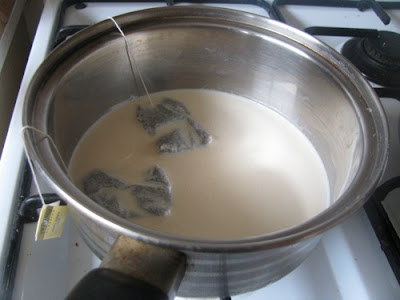 I do however like the idea of tea in baking, whether it be traditional fruit cake with dried fruit soaked in tea, or new fangled cupcakes tinted green with matcha tea. When Choclette announced that the theme for the We Should Cocoa blog event was tea and chocolate, I hoped to find an inspiring recipe. So I was pleased to find a recipe for Earl Grey Cupcakes in one of my cookbooks. Though I don't drink Earl Grey any more, I still like the smell of the bergamot oil that gives it the distinctive aroma. 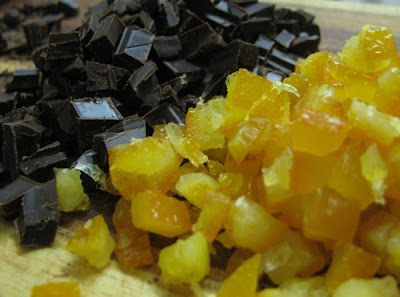 These cupcakes had optional crystallised orange in them and Earl Grey infused chocolate ganache. I was actually hunting for cupcakes to trial Ricki's chocolate frosting which was a healthier alternative to the ganache. It was also an opportunity to used up my mixed peel, and I couldn't resist adding some extra chopped chocolate for taste and wholemeal flour for health. I resisted adding too many flavours because I didn't want to overwhelm the Earl Grey. 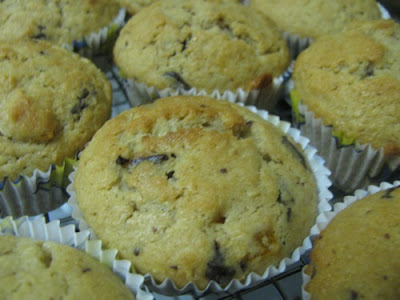 I loved the cupcakes warm out of the oven. I could have (and did) eat them without frosting. It was merely my dedication to research that made me go ahead and try the frosting. The cupcakes were a bit dry the next day so I was glad I had decided to make the frosting.

The frosting was amazing. It has sweet potato and cashew butter in it for texture and to reduce the GI. Ricki made it to be sugar-free but I don't need to so I used my regular icing sugar rather than coconut sugar and stevia. I was very happy with the taste. In fact I think this could be a sort of fudge or truffle to eat by itself. Less successful was my presentation. 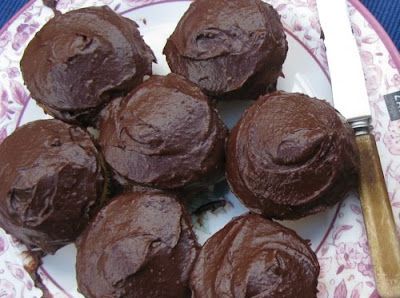 I had decided that I would pipe glamourous swirls of icing onto the cupcakes but I am still not very familiar with my icing gun. Not surprising, giving that I hardly use it. My piping looked more like messy scribbles than neat lines spiraling upwards. I was so unhappy with them that I grabbed a butter knife and smoothed over the piping. (Note to self: learn how to use icing gun!) 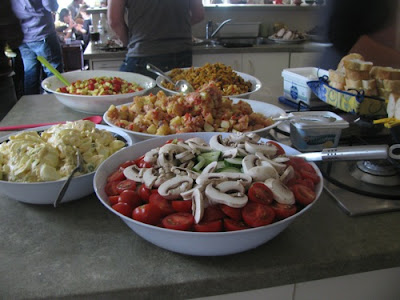 Today was my niece Ashton's christening. Both my mum and my sister-in-law's mother put on a great lunch. There were huge bowls of salad and my mum made me a delicious eggplant bake to have instead of the hunk of meat from the bbq. Ashton is one of the smiliest babies I have ever seen and had a lovely time. Her brother Cooper wasn't quite sure of her outfit until he was convinced that she was wearing black and white because they were the colours of his football team. My niece Quin kept my nieces happy with her piano playing. Sylvia wore her new pink party frock and had a good time eating chips, cake and fruit. When we got home she was so tired that she lay on the floor and cried. That's no way to treat a party frock! 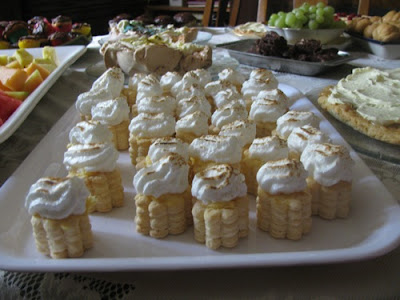 I took some of the cupcakes down for the lunch. There was an impressive spread of sweet food. Above is the lemon meringue tarts made by Ashton's maternal grandmother. She is a chef and I was impressed to watch her crisp up the tops with a mini blow torch rather than bake them. The table also heaved with caramel tart, pavolva, hedgehog, profiteroles and fruit. My favourite dessert was the chocolate cake specially decorated for the occasion (see below). 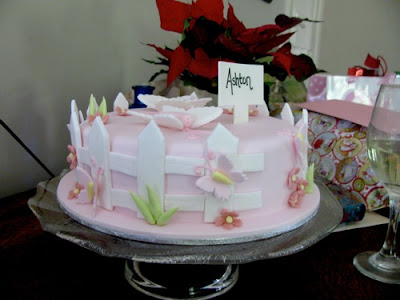 I enjoyed asking a few of my family to guess what was in the frosting. No one could. My brother Andy guessed potato but I suspect that was because he was traumatised by my addition of mashed potato to chocolate cake many years ago. My sister Susie said it was weird because she thought icing was normally really sweet. I had thought it was sweet enough but E had also commented that the cupcakes weren't that sweet.

Fran said that the cake tasted like jaffa. Indeed the orange and chocolate flavours were more dominant than tea. Earl Grey is flavoured with bergamot orange, so I guess the orange flavour is no surprise. Sylvia ate some of the cake - and crumbled some to sprinkle over her high chair - but refused to eat any frosting. 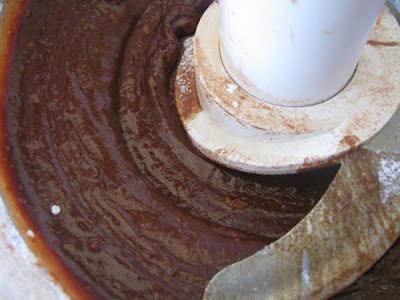 As for me, I enjoyed these cakes so much that E now seems to be nervously watching his posh Harrods teabags. The cupcakes were just sweet enough with a slight bitterness of chocolate and peel. The frosting was smooth and more like ganache than buttercream icing. Best of all I am excited at an icing that is more than just a sugar hit. While it is not low fat, it has far more nutrients than most icings I have come across. Definitely to be repeated!

Preheat oven to 180 C. (If you need to bake sweet potato for the frosting, this is a good time to put it in the oven until after cupcakes are baked - test doneness with a skewer.) Line cupcake tins with paper liners.

Place milk and teabags in a small saucepan. Gently bring to the boil. Turn off the heat and leave to cool to the touch - at least 30 minutes. Squeeze out tea bags and discard.

Cream butter and sugar. Add eggs and beat until light and fluffy. Add flours, baking powder and salt in batches alternating with infused milk until just combined. Gentle fold in the chocolate and mixed peel.

Spoon into prepared cupcake tins and bake for 25 minutes or until cupcakes are golden brown and a skewer inserted in the middle comes out cleanly. Cool on a wire rack.

To make frosting: blend the sweet potato, icing sugar, maple syrup, vanilla and sea salt in the food processor. Add cocoa and blend. Melt chocolate, coconut oil and cashew butter in the microwave or on the stovetop and add to the food processor. Blend until creamy. Spread or pipe over cupcakes. It makes quite a lot so you may have a little over depending on how much you use.

On the Stereo:
Selected Ambient Works by the Aphex Twin: Vol II: Aphex Twin
Posted by Johanna GGG at 21:38