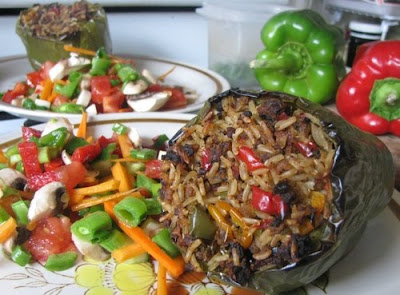 Some days I am very aware that I read bloggers' posts with my vegetarian goggles. Where they write meat, I immediately begin to think about substitutes. Of course this mostly happens where I love the flavours being used in a meat dish. Though I don't imagine I would have much interest in a meat dish unless I was interested in the flavours. 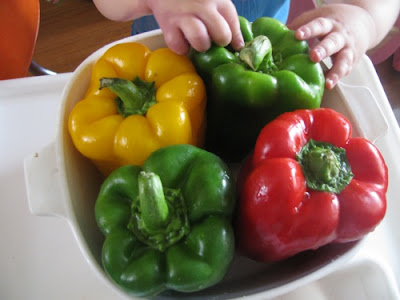 Today's recipe is a great example of this. I found Kalyn's Stuffed Green Peppers with Brown Rice, Italian Sausage, and Parmesan, substituted leftover nut roast for sausage and downsized the cheese. It was a huge success. Kalyn had found cheap green peppers. I didn't but I had some nut roast in the freezer that I was puzzling over how to use. I checked out my previous stuffed pepper post and decided I would give each empty pepper a quick burst in the microwave before baking, unlike Kalyn, who doesn't bother with pre-cooking. 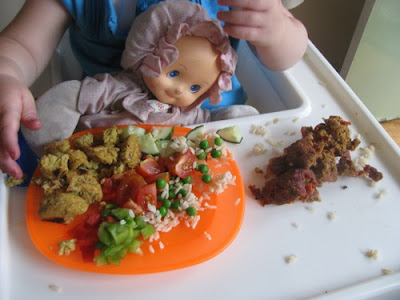 I gave Sylvia a little of my rice and chopped peppers (known in Australia as capsicum but I like calling them stuffed peppers so will use a bit of American terminology today). She enjoyed it. I wish I could say the same for her reaction to the nut roast. She was more interested in crumbling it up than eating it. Oh well, it needed to be crumbled for the recipe. 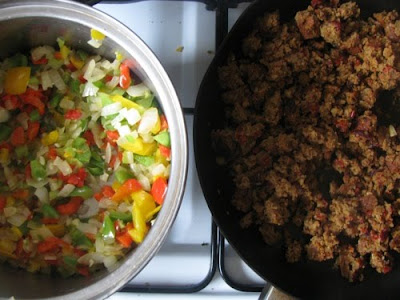 While you could use a commercially produced vegetarian sausage here, I love using a nutroast that I have made because I know all the flavours that go into it. Of course, there is nothing to stop you making your own sausage like those recently posted by Mangocheeks and Mel. I found that my nut roast added so much flavour that I was able to reduce the cheese to a little cream cheese. The recipe could be veganised with a spoonful of any other sauce or binder. If you do try this recipe with veg sausage or nut roast, you should take into account that they tend to be drier than their meat equivalent and might need more oil. 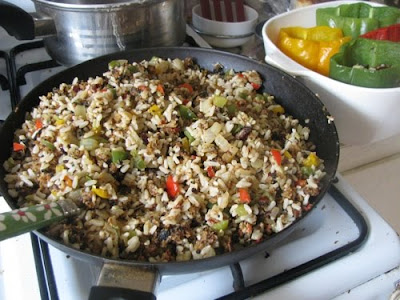 Kalyn suggested preparing the rest of filling while the rice cooks but this was not for me. Sylvia was in the backyard while I cooked and so I spent quite a bit of time trying to stop her getting up to her armpits in sand and soil just before dinner. This required a hunt for a string of blue beads that she loves so she could tip this in and out of her little toy saucepan. 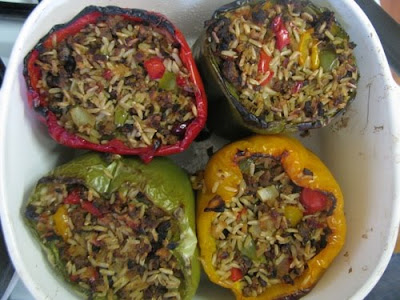 I was pleased that I had bought different coloured peppers because they did look pretty together in the casserole dish. They were less pretty on the plate with messy salad. But they tasted delicious. I loved the addition of fennel. It is a dominant spice so I don't use it often but I appreciate recipes like this that show me just how good it can be. I tried a smidge of chutney on my pepper but it just got lost so I think if you need a sauce it should be added to the mixture or used liberally. 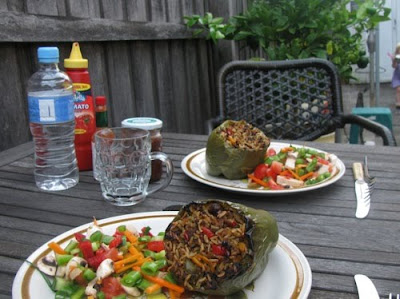 Eaten out in the backyard on a balmy evening with Sylvia playing, these peppers completed a pleasant evening.. We only managed it on the second night when I just bunged the leftover peppers in the microwave. It took me far longer to prepare them on the first night but they were worth it.

Cook the rice in boiling water for 30 minutes until soft (or use whatever method you usually use).

Lop the tops off the peppers so they are even with each. Discard the stalk and pith and then finely chop the trimmings. Cook each pepper shell in the microwave with bottom up for 2 minutes on high. Place peppers in a greased casserole dish - preferably one that holds them snugly.

Fry the onion, garlic and diced pepper in 1 tsp of oil until soft. Remove from heat. Fry the crumbled nut roast (or sausage) in 2 tsp of oil, stirring occasionally until starting to brown and crispy bits are appearing. Add the onion mixture, fennel, and oregano and stir for 2-3 minutes to blend the flavours. Add cooked rice, cream cheese, lemon juice, nutritional yeast flakes and seasoning and stir for a minute or two until warmed through.

Spoon the rice mixture into the peppers, pressing down with the back of a spoon. If you have any leftovers you can bake in a separate ramekin or even sprinkle around the peppers in the casserole dish.

Bake for about 45 minutes at 200 C or until tops are crispy brown. Serve with salad. Can be frozen.

On the Stereo:
Soft Black Stars over Lisbon: Current 93
Posted by Johanna GGG at 19:53