Creamy soup, village life and fish in a bag 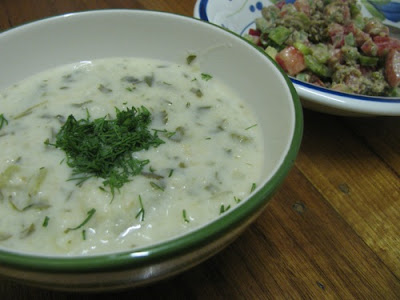 A few weeks back I made a creamy potato soup. A few of you commented on how lovely it looked below a heart shaped cheese cracker. I was pleased to hear but I fear all the kudos goes to the crackers rather than the soup. Creamy white with green flecks is not the most attractive of soups. In fact it reminds me of fish in a bag. Which takes me back to my days as a carer in the English countryside. So I hope you will indulge me with a little trip down memory lane.

Many years ago I had a working holiday visa for the UK. After a stint working in London I wanted to see the real England and embarked on a short-lived career as a carer for elderly people. I cooked steak, I refused roles that seemed to be for nurses and I spent a couple of months in a tiny village in Warwickshire. It was in this village that I learnt many things, including how to cook fish in a bag. 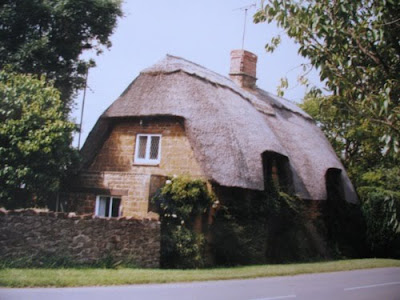 The village looked like something out of Midsomer Murders with its thatched cottages and stone walls. The church had a covered gateway, called a lychgate. I even spent time having tea with neighbours where wills and money were discussed. It was here that I first heard the phrase "shrouds don't have pockets". There were no shops. The villagers told me that the shop had closed once VAT was introduced.

A lot of my day was spent watching television with the lady I looked after. I lost count of the times we would watch the news each day and I became very familiar with Richard Whiteley's Countdown. Each day I would go for a walk. I needed to get out and loved exploring the public footpaths that went through the fields and the kissing gate (see below photo). 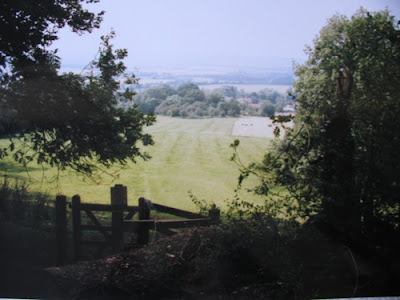 On my walks I passed lots of raspberries in the hedges and haystacks in fields. One of my fond memories is meeting a strange old man who told me all about the badgers he had seen and made me stand on a bench seat with him while we watched a fox so that it didn't smell our scent. I was delighted to discover a post office in an adjoining village up the hill. It was great to be able to send letters home when I was so isolated. The second time I went there I couldn't find it again. Later I found out that it was in a private house that only put the post office sign out when they were open.

After a while I got out a little further. One time I needed to see the doctor for a medical for my travels. I must have walked 20-30 minutes to get to a nearby town that had a doctor. Later I discovered that I could take a bus into Banbury to browse the high street shops. I had to make sure I caught the bus back because they only went to my village twice a week. Maybe this explains why even some bus drivers didn't know where the village was. I remember the old ladies saying "turn right here, driver" to one who lost his way. 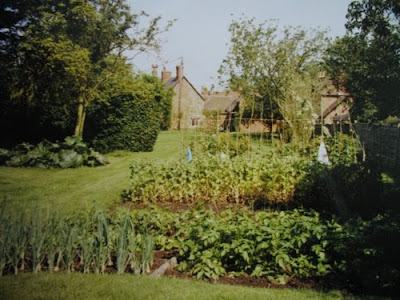 It was a strange life. Once a week I received a food delivery and put in an order for the next week. We also had a gardener, a salt of the earth chap who grew lots of veggies. Below are his onions hanging up. I also remember begging a pumpkin off a neighbour who thought them only good enough for his pigs. It wasn't the best pumpkin I had ever eaten but I was homesick for them. 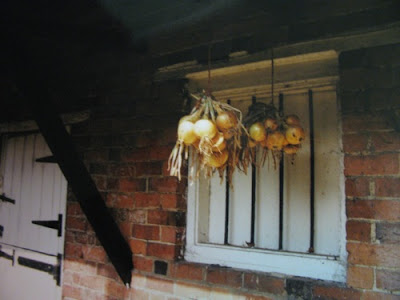 But the lady was not really interested in her food. In fact one of my main tasks was to make sure she ate. If she had her way she might have existed on polo mints and chocolate fingers. She liked plain food. Sausages, bacon, salad cream and fish in a bag. I had never made fish in a bag before but it suited me as a vegetarian. All I had to do was drop a bag of fish in a creamy sauce with flecks of parsley in a saucepan of boiling water. When it was done I just cut one edge of the bag and tipped the fish and sauce onto the plate. She loved it.

Don't ask me what I ate. It wasn't pretty. I only remember one dish of baked rice and condensed tomato soup. This wasn't a job that I could do long term. I was happy to save money and then head off on my travels. Though I have sometimes wondered about the people in this small village and if my lady is still alive. 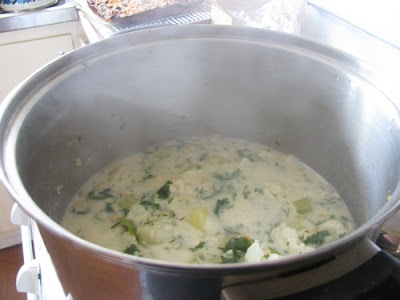 I am glad to say that even if this soup reminded me of fish in a bag, it was far more complex and interesting. My inspiration started with some leftover buttermilk that I wanted to put in a soup. I turned to Nava Atlas who has lots of creamy soup. Her Parsley Potato Soup sounded tasty. However by the time I had made some changes and teamed it with my Creamy Lentil and Date Salad, it was a tad bland.

It needed a makeover and a new partner. I threw in some freshly-ground black pepper, smoked paprika and mustard and let it sit overnight. I paired it with the cheese biscuits. It was absolutely delicious. E fell in love with it and I was pleased to offer it to my dad when he dropped in for lunch. It was very tasty with a tang from the buttermilk, some freshness from the dill and parsley and lots of chunks of vegetables.

Creamy potato and dill soup
adapted from Nava Atlas
serves about 6
Heat olive oil in a stockpot. Fry onion and celery over medium heat for a few minutes. Add garlic and fry another 10-15 minutes until vegetables have softened. Add water, stock powder, potatoes and bring to the boil. Simmer for about 10-15 minutes. Add cauliflower and cook another 5-10 minutes or until potatoes are cooked. Add cream cheese herbs and rolled oats. Stir well and cook another 15 minutes. Add buttercream, mustard, smoked paprika and black pepper. Gently heat and serve with a little chopped dill as a garnish. If possible, make it the previous night and it will taste even better the next day.

On the stereo:
Early Morning Hush - Notes from the UK Folk Underground 1969-1976: Various Artists
Posted by Johanna GGG at 15:53