So autumn is turning dark and cool as we enter May.  That means a lack of light for photographing evening photos; soups and stewed replacing salads and smoothies, and the ground thick with rustling autumn leaves.  It is perfect weather for baking.  Given we have had the school holidays and ANZAC day last month, I have also have opportunity.

The above photo is of a salad roll I made for lunch recently.  It had avocado, cherry tomatoes, cheese and spinach in a sourdough bun (using this bread recipe).  I made it because I was tired of bringing boring vegemite and cheese sandwiches to work while those around had healthy bowls of vegetables.  As an aside, on the radio recently I heard that in a survey, 1 in 6 people eat the same lunch every day.  People rang up to talk about their lunches.  One man had vegemite and sultana sandwiches every day and a woman had vegemite and lettuce sandwiches every day. 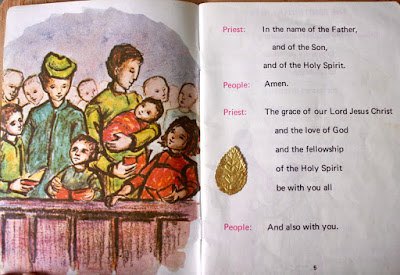 Over the school holidays I dug out my old mass book to show Sylvia how I learnt all the responses at mass.  What is really special about this book is that inside it I keep the gold leaf from my First Holy Communion cake that I had when I was 8 years old.  It amused me that the pictures in the book are of large Catholic families.  All better behaved than we often were in mass. 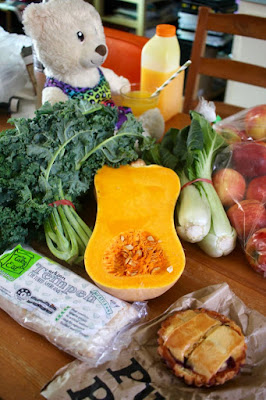 Sylvia and I had a ride to the Coburg Farmers Market a few weeks back.  It had moved to the back of the Coburg North School and is going to be on the move soon.  But I don't know when.  I really should be going more at this time of year for the excellent apples but haven't got organised.  However I was pleased with our haul from a quick visit.  Kale, butternut pumpkin, bok choy, apples, tempeh, orange juice and a raspberry pear pie. 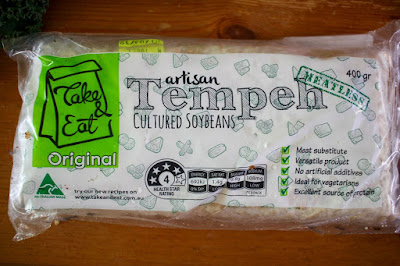 I was really interested in the stall at the market selling locally made artisan tempeh.  They had cubes of it lightly seasoned and fried which were really good.  So far I have made some chowder with it, a bit like this tempeh corn chowder.  The other half is in the freezer waiting for more inspiration.  Or else I will eventually made my favourite Asian-style tempeh and corn soup. 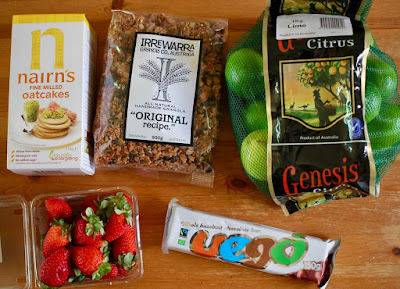 I also had a shopping trip in Geelong Fresh over the school holidays.  It is such a lovely shop of lots of fancy products and reasonably priced fruit and veg.  I bought some limes and strawberries.  The limes became limeade.  I also purchased some Irrewarra muesli because everything Irrewarra produces is amazing, some oatcakes for E, and a Vego bar.  The last is a vegan milk chocolate and hazelnut bar and is really delicious. 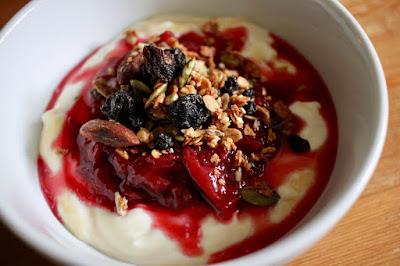 Here is the Irrewarra toasted muesli (actually they call it granola but it was always toasted muesli when I was growing up so I still call it that) with toffee and honeycomb yoghurt and stewed plums.  I have been stewing quite a few plums.  They really make a breakfast feel more fancy and satisfying. 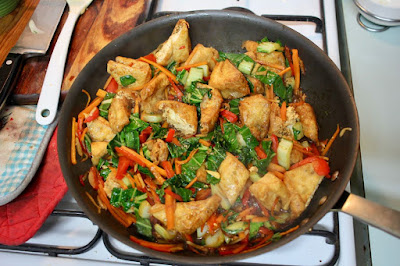 I bought a packet of tofu puffs and then wondered what to do with them.  Finally I made some Braised Tofu Puffs, a bit like this stirfry.  It was good but not great.  I am still not sure if I like tofu puffs.  Some days I think I do and others I wonder if anyone likes them. 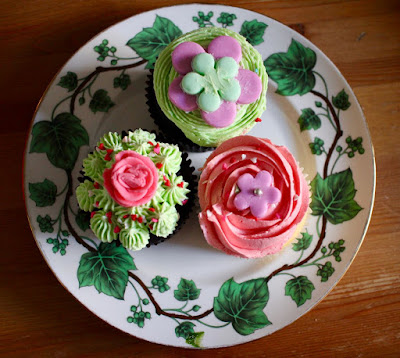 Easier to like is cupcakes.  At a recent work teambuilding day we had a 2 hour cupcake decorating workshop at Cupcake Central in Melbourne Central.  It was lots of fun to work with fondant and have a go of some different piping nozzles.  Here are three cupcakes that survived overnight. 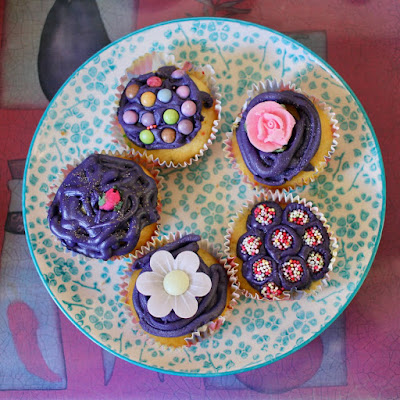 Soon after Sylvia went to stay with my mum and had to get her own cupcake decorating experience.  She brought home a tub of very cute cupcakes. 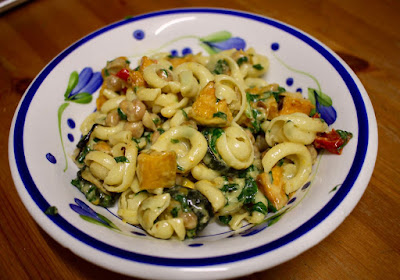 I bought some cream for E's birthday cake that sat around being mostly neglected.  So one night when Sylvia was away I roasted vegetables and chickpeas with a a vinegar and seasoning.  The following evening I mixed it with cream and cooked pasta.  It was simple and good but would have benefited from a bit of lemon juice and maybe a bit more seasoning.

I also recently had a go at Kari's vegan creamy tomato pasta but did not take photos.  I quite enjoyed it but needed to season it more.  I have some of the creamy tomato sauce left and fancy trying it on some pizza tomorrow. 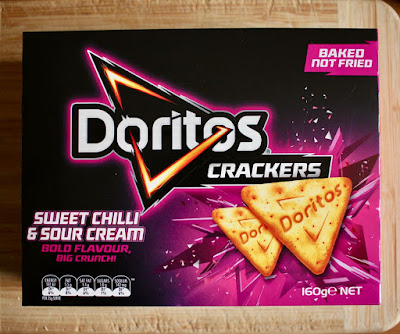 We have been quite taken by the Doritos crackers.  Perhaps too much.  They are really highly seasoned and very moreish. 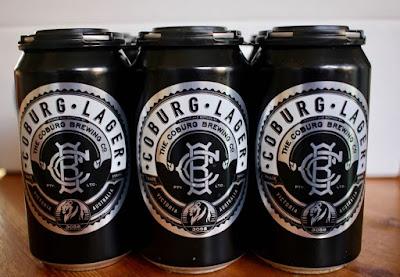 E has been given a case of Coburg Lager.  As well as enjoying having some cans in the fridge, he has been pleased to given a few away to people who had been a huge help: my sister's boyfriend for fixing our car and my dad for helping out around the house. 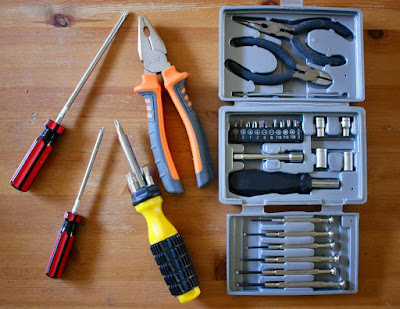 Here are a few new additions to our tool set on the left.  My dad came to help with putting up new blinds in our loungeroom.  As our car had broken down in Geelong, I had taken my mum's car, he had brought my car back so he could drive my mum's car to his house and meanwhile my mum had taken his car with a lot of his tools.  So I suggested we buy a few extra to make our tool kit a bit more useful.  On the right is E's five pound toolkit that he takes great pride in.  (We do have a few other bits and pieces but not heaps.)  The tools helped but my dad's patience and persistence were invaluable too. 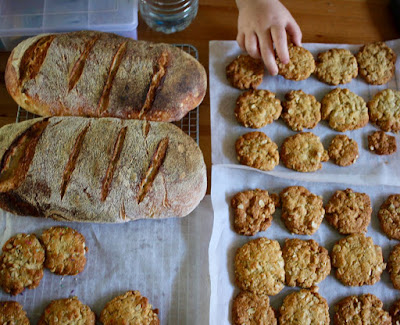 Last Sunday I had a coffee with a friend and bookclub.  I baked bread first thing and then made ANZAC biscuits.  Because I always feel better when I don't arrive empty handed.  Bookclub was great because the author came along and it is just fascinating to ask them questions like, did you have any control over the cover of the book? 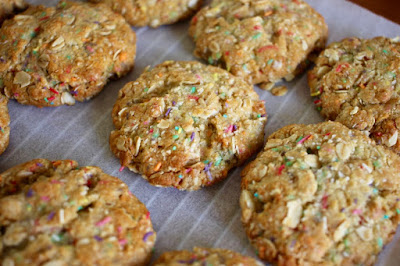 When we made the ANZAC biscuits, Sylvia decided it would be a good thing to tip sprinkles over the raw biscuits before they went into the oven.  I said no and cleaned it all up.  Then I promised I would make her some funfetti ANZACS.  They would horrify the traditionalists (hi mum) but they were fun.

I am sending this post to Sherry of Sherry's Pickings for the In My Kitchen event, that was started by Celia of Fig Jam and Lime Cordial,  If you would like to join in, send your post to Sherry by 28th of the month.  Or just head over to her blog to peek into more kitchens.
Posted by Johanna GGG at 23:29