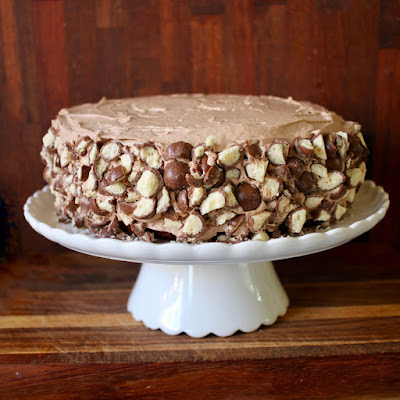 Green Gourmet Giraffe is eleven.  Yet another blog birthday.  Now I am in double figures I am a bit blase about these anniversaries.  But I still love cake.  And my blog started after E's birthday so I have an excellent reason to make cake.  Something simple.  Full of chocolate.  When I said that I was making a chocolate cake with Maltesers, Sylvia thought it a bad idea because I had made a Malteser cake last year and another the year before.  I can't see a problem with loving chocolate and malt. 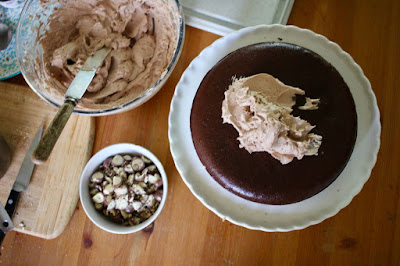 I did have other problems with the cake.  Firstly it was a little confusing to be directed to whisk the dry ingredients and the egg with the sugar.  I was not sure if this meant I should stir or use electric beaters.  I suspect it meant stir but I used the electric beater.  Then I misread baking soda for baking powder.  (It is very confusing that Americans say baking soda instead of bicarbonate soda.  I usually catch it but was not concentrating.)  So the cake, which had very little leavening agent, had even less rise than intended.  Finally I decided to weigh the cake tins to make sure I divided the batter evenly.  Unfortunately it was that moment that the battery failed and I discovered it was really difficult to take off the battery cover.  Weighing cake tins was less important than getting them into the oven quickly. 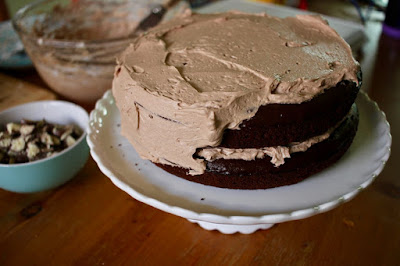 Then there was chopping maltesers and being very tempted to eat them.  You could call that a pleasure or a challenge.  There were some leftover and then I saw that Sylvia had decided to put some in a circle on top of the cake.  Not quite what I planned but she made sure it had her stamp on it with some popping candy as well. 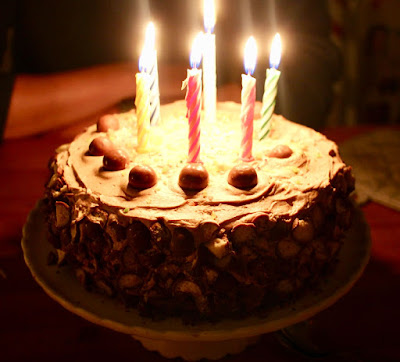 It is a fancier cake than I usually make but is still not too difficult.  I baked the cake the night before, did the buttercream and malteser decoration in the morning.  We went out for lunch to the Cornish Arms (which I will write about some day) and then bought Sylvia a new amazing Malvern Star bike.  Once we got home and Sylvia did a few laps of the driveway on her bike (amazingly easy transition from trainer wheels to no trainer wheels) I baked pizza and then we had cake.

The cake was brilliant.  For all of the concern about the lack of rising agent, it rose enough but was incredibly dense and rich.  The buttercream was really soft and luscious.  And the Maltesers had softened over a few hours and were all chewy and malty.  I was quite relieved - and delighted - that the cake worked. 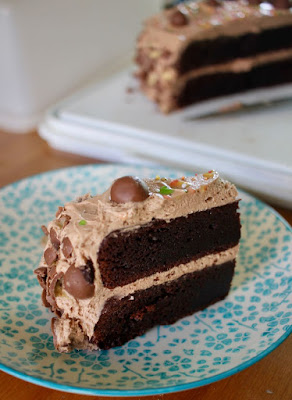 As for my blogiversary.  As always, I am grateful that my blog continues to amble along and wish I had more time for it but always grateful for all the support I receive and the inspiration it gives me.  Last night E and I watched Lessons from a Middle Class Artist about struggling musician Anthony Frith goes to the US to meet successful novelty song composer Matt Farley. It made me reflect on what sort of contribution I made towards the internet.  And I feel proud of my contribution in my little corner of the world wide web.  Some days I wonder about the future of the web and where it will be in another 10 years.  For now I am quite fascinated by all the change over the past 11 years.

When I planned this post, I decided I would do a it's-my-blog-and-I'll-write-what-I-want tangential random diversion.  However as it is late at night and I am just glad to have got my anniversary post in on the date I started my blog 11 years ago, I will not ramble as much as I would like but just say it's-my-blog-and-I-wish-I-had-more-time-for-it-and-had-not-just-fallen-down-a-facebook-rabbit-hole.  Honestly I have had a good weekend but it will have to wait for another time.  Because I am hopeful that there are many more blog posts to come.

Mix milo, flour, cocoa. salt and bicarb.  Set aside. Beat eggs, sugar and oil together until mixed.  Add dry ingredients and milk in three batches, beating after each time. Pour into cake tins and bake for 45-50 minutes.  Turn out onto a rack.  Cool.

Place one cake on a plate.  Spread a generous amount of buttercream evenly over the cake.  Place second cake on top.  Spread buttercream around cake.  Press maltesers around the side.  Cake great the next day, lasts another day or two.

Mix milo and boiling water until milo dissolves.  Beat butter with electric beaters until it becomes paler and then gradually add icing sugar until mixed.  Beat in milo mixture.

NOTES: Milo is a chocolate malted milk powder from Australia.

On the stereo:
Steven Universe soundtrack (vol 1)
Posted by Johanna GGG at 23:27