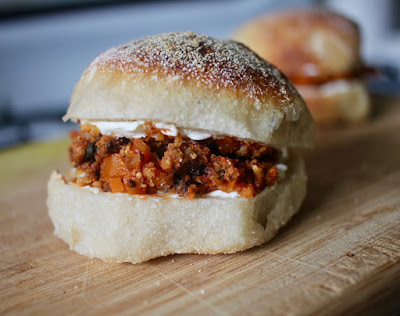 It's been a pleasant weekend of sunshine and blue skies.  Yesterday Sylvia soaked up the sunshine in the park and today she made a house in the front yard with her friend.  Today, in between baking bread and stewing fruit, I swept up the debris left by the tradies who have fixed the tiles on our roof .  But my recipe today harks back to earlier in Autumn when I baked nut roast for Easter Sunday lunch. 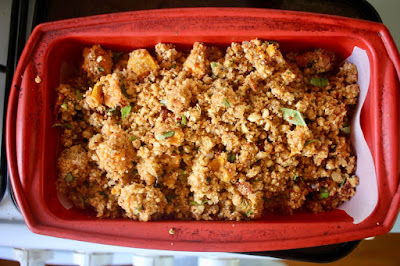 I made the loaf to use up some pumpkin I had roasted, the dried up old sundried tomatoes in the back of the fridge and the basil from the garden.  It seemed to bring together Autumn and Spring just as we do in Australia when we celebrate Easter. 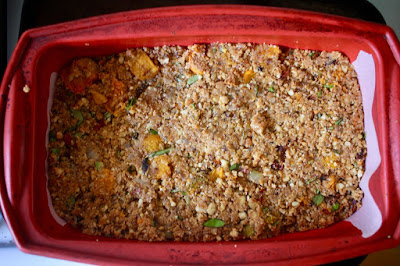 I was a bit worried about getting the texture right with the pumpkin.  I have tried some pumpkin nut roasts in the past that are a bit soft.  This one was actually a bit crumbly on the edge but I think that was because I left it in the oven a bit long.  When I make them to take to my mum's for lunch, they get baked twice: once at home and once at my mum's.  The middle was great and not too soft. 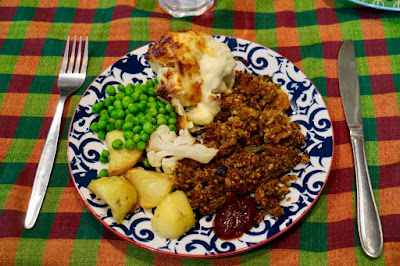 Above you can see I had a really lovely Easter lunch of nut roast, chutney, roast potato, peas and cauliflower cheese.  I had quite a bit leftover so I ended up mixing it crumbled with some leftover tomato pasta sauce.  It was like a thick bolognaise sauce.  I took it to work spread on a home made sourdough bread roll with some cream cheese.  I felt quite fancy at lunchtime.

Fry onion in oil.  Mix with nuts, pumpkin, breadcrumbs, basil, sundried tomatoes, paprika, mustard, and vinegar.  Mix vegemite into hot water and add to mixture.  Season.  Mix to combine and season.  The mixture should be clumping rather than a batter but when you pinch it between your fingers it should hold together.  Scrape into a greased and lined loaf tin.  Smooth top with the back of a spoon.  Bake at 180 C for 30 minutes or until golden brown and firm to touch.

NOTES: I used old really dried sundried tomatoes so I poured boiling water over them and drained it before adding the sundried tomatoes.  Then I used the hot water to mix with the vegemite.  I weighed my basil to be about 10g but I would use more if I had it and less if it was all I could get.

On the stereo:
Colin Meloy Sings Live
Posted by Johanna GGG at 23:10