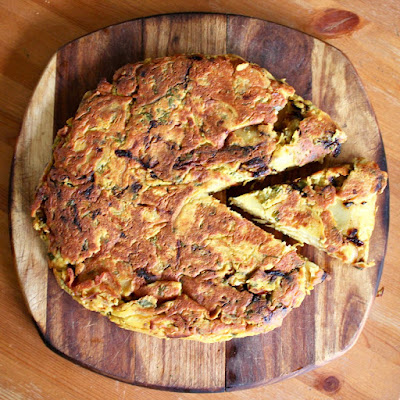 When we went to my mum and dad's for ANZAC Day brunch yesterday, mum asked what I would eat.  I was pleased to have my Tortilla de patatas when everyone else had bacon and eggs.  I had decided it would be a good dish to take down because we drove down the previous night when my mum was out doing her volunteer work at dinner time. 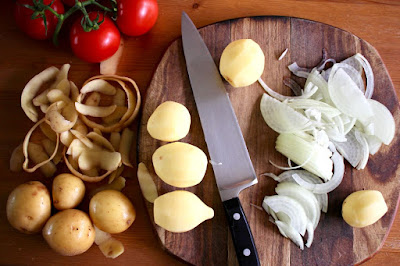 I have wanted to make a Tortilla de patatas or Spanish potato omelette for a long time.  In fact when I visited Spain almost 20 years ago, I would have been delighted to know you could make a vegan version.  I went to Spain on a whim without a thought to what vegetarian food I could eat and ended up barely going near a tapas bar because I could not understand the language nor did I know much about the cuisine.  In my defense, there was no easy internet access and I had other things on my mind.

After the trip I spoke to other vegetarians about Tortilla de patatas (often just referred to as tortilla because I think it is the most comment tortilla in Spain) and sort of regretted not trying it but not that sad because it sounded like far too much egg for me.  The discovery of vegan omelettes have made the idea of eating a tortilla far more delightful.  Especially when there are potatoes that really need to be used. 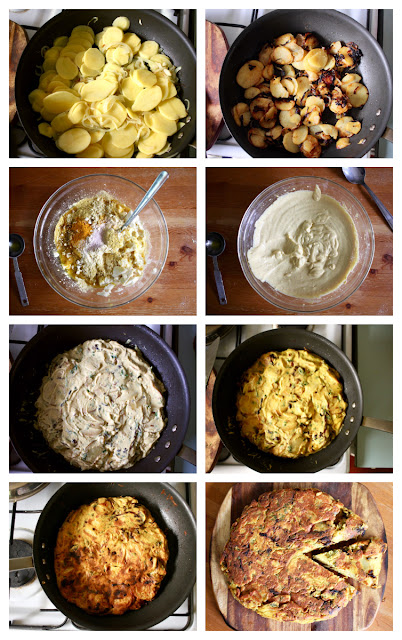 I bookmarked a recipe on Wallflower Kitchen quite some time ago that inspired me.  However I was not sure of just using besan flour so I ended up just making my favourite omelette recipe which uses both besan and tofu.  It is quite a well seasoned mixture so I regretted the pinch of salt on the potatoes and would not do it again, just as I would not fry the onions for a few minutes before adding the potatoes because my onions were dark brown in many places.  But I think a bit of char is fine.

Traditional tortilla de patatas recipes call for a cup or more of oil to deep fry the potatoes.  I was happy with 3 tablespoons of oil and no leftover oil to drain away at the end of the process.  I think it also helped to go outside and potter in the garden while the potatoes cooked for about 10 minutes so they fried without me prodding and pocking and worrying at them. Getting nicely fried potatoes will really make a big difference to this recipe. 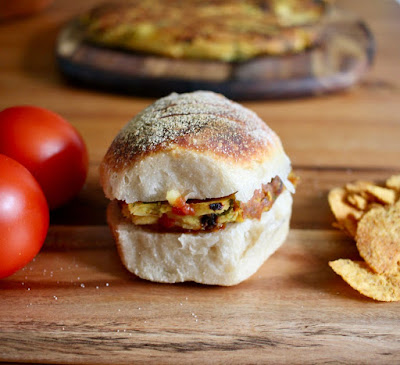 I made the tortilla the day before ANZAC Day.  My usual omelette takes about 20 minutes and is one of my quick meals.  This omelette took about an hour with slicing, frying, frying, frying, and finally browning under the grill.  Yes the frying took a lot longer and there were more steps than frying.  So I don't see this recipe going into regular rotation.  I can see myself making it again as it was excellent.

It was a long time until lunch but it was well worth it.  I went simple with my lunch and put some omelette into a sourdough roll with some of my mum's home made sauce.  It was amazing. 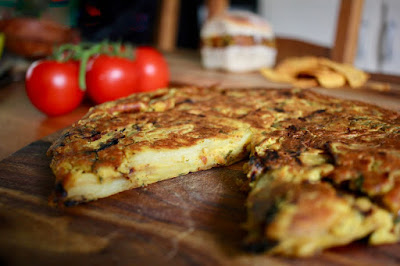 I kept aside most of the tortilla to take to my parents.  We had a hearty ANZAC Day brunch.  My mum made sourdough bread and pancakes to go with egg and bacon (so E had reason to sing Making Bacon Pancakes from Adventure Time.)  Me, I was so happy to eat a vegan Spanish omelette rather than egg and bacon.  (My aunt once told me there would come a time when I would really need egg and bacon for breakfast after a big night out but I still laugh at the idea!)  It was nice to see my famly and share a big brunch.  Did I mention freshly squeezed orange juice! 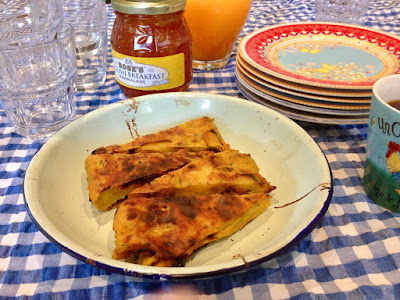 Unusually brunch was the biggest meal of the day.  We had some sausage rolls before I took sylvia and my niece to the pool.  Then we had fresh scones with jam and cream after some shopping (for boring school tights and exciting rare Beanie Boos).  Finally as I was about to drive home, the car was steaming and leaking so we had to call the RACV to look at it and tell me not to drive it to Melbourne.

As you can see by all the feeding, my parents are good people who are excellent in a crisis.  My dad checked on the car and talked to the RACV.  My mum made cheese on toast for tea, loaned me her car to drive home and rang my sister's boyfriend to arrange for him to fix the car.  If you start your day some hearty tortilla and end it with the support of family, you can handle almost anything that happens in between.

Fry onion and potato for about 15 minutes in oil over medium heat in large frypan until potato is cooked and a little brown around the edges.  Flip over occasionally (every 5-7 minutes) so that the potatoes aren't handled too much and keep their shape.

Cool potato mixture once cooked and while they cool, blend all the omelette ingredients until smooth in a medium bowl.  Mix potatoes and onions into omelette mixture gently so potatoes hold their shape.

Heat teaspoon of oil over low heat in the same frypan where the potatoes and onions fried. Swirl it around to cover frypan.  Scrape omelette and potato into frypan and use spoon to neaten the edges to make a round shape.  Fry for 10 minutes.  Then put a lid on it and fry another 20 minutes or until the mixture looks cooked (slightly drier than the mixture).  Place frypan under the grill for about 5-10 minutes to brown the top.

Flip onto a plate or chopping board.  It tastes great hot but slices up nicely when cooled and firmed for a bit.  The omelette can be kept overnight in the fridge but will be firmer than when it is freshly cooked.

On the Stereo:
Tooth and Nail: Billy Bragg
Posted by Johanna GGG at 23:36