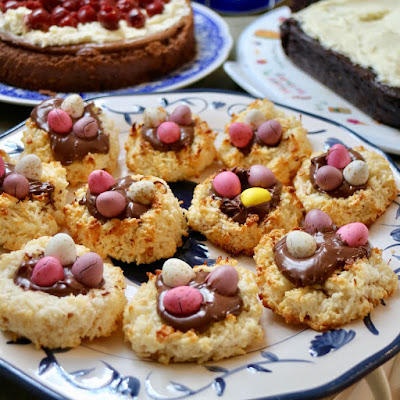 The shops are all but cleared out of Easter goodies as though we can't wait to leave it behind.  Yet my parents tell me that this is Easter week in the church calendar.  So I think it is still the season to talk about my Easter baking and the Easter weekend just passed.  I can't tell you how happy I was at my oven being fixed so I could bake hot cross buns and fun Easter nests. 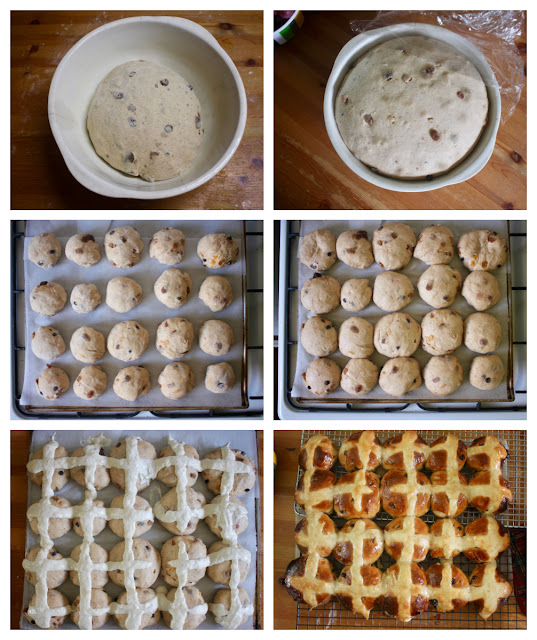 I followed the recipe I had used last year for Hot Cross Buns (even using up Christmas fruit mince again) but instead of leaving it for 6-7 hours during the day, I left it about 8 and 1/2 hours.  It rose much better this year than last year which probably helped them to be soft and delicious.  As always I did some nice thick crosses because they are chewy and delicious.

Sylvia was keen to make choc chip hot cross buns (a travesty to traditionalists like myself) but I had to keep reminding her that I did not have the ingredients and all our supermarkets were shut on Good Friday. 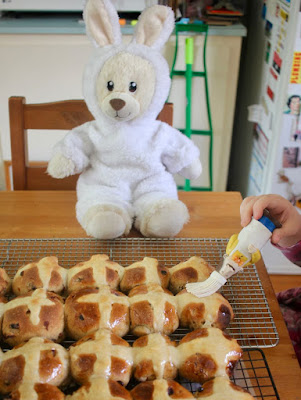 Sylvia really enjoyed helping out.  Well it was a bit of a bun fight (no pun intended) over who piped the crosses but she loved helping to glaze them.  Then I read her Nevermoor (by Jessica Townsend) and we ate fresh warm hot cross buns.  A perfect lazy afternoon.  Nevermoor has been given Harry Potter style hype and indeed there are similarities in a poorly treated young girl being taken to a new and wundrous world but I really found it hard to put it down by the time I reached the second half and loved lots of whimsy and creativity in to the story.  I can't wait for the next book to be published. 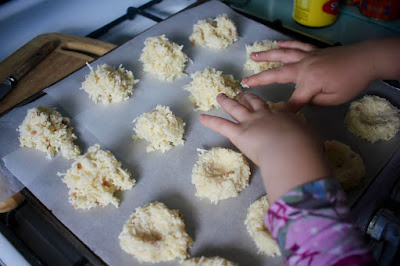 Once we had finished Nevermoor we could turn our attention to our own little whimsical project: Easter macaroons with nutella nests.  They were fun for Sylvia to help with.

I made changes to the original recipe which made it a bit less kid friendly.  Instead of buying sweetened coconut, I used the whole tin of condensed milk and caramelised 2/3 of it.  This meant an incredibly hot bowl with caramelised condensed milk in it.  I had to scrape it into a cooler bowl and run it under lukewarm and then cold water (I am paranoid about the hot glass bowl cracking under cold water). 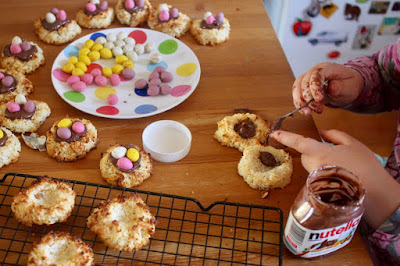 Once the caramel cooled, it was easy to make the nests.  And deliciously messy to spoon nutella into the nests.  But who can complain about a recipe that uses condensed milk, coconut, nutella and chocolate!  I made 20 nests rather than 10 nests.  They were plenty big enough so I would not make them bigger.   And plenty sweet too.  Sylvia said they were too sweet. 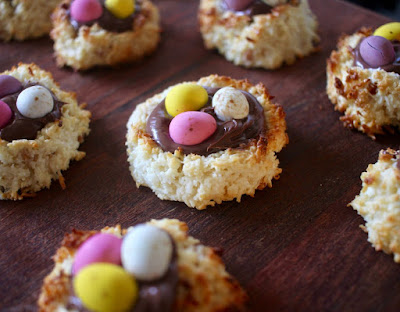 We packaged up most of the nests in tubs.  I had two nests that the nutella did not stretch to filling.  These were specially for my dad.  He is not as keen on chocolate as he used to be and macaroons were his dad's favourites so they are a sentimental choice for him. 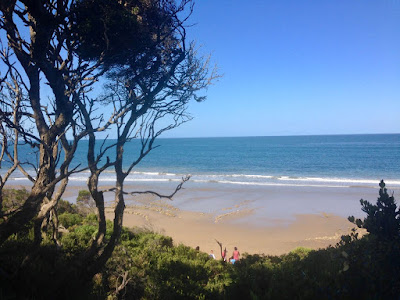 We arrived at my parents just as they were heading off to the beach for an ice cream with my brother's dog who was visiting.  It was a perfect afternoon to wade at the waters edge but both Sylvia and I were a little sad not to have our bathers.  I remarked that most of the swimmers had their wetsuits on and my mother scoffed that they were lightweights.  She comes from a different era! 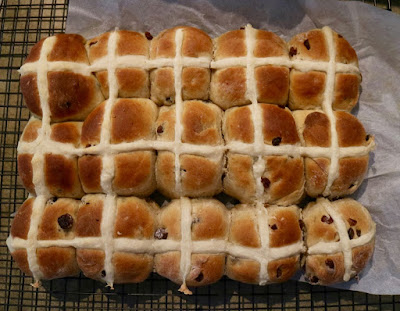 We attended the Easter Vigil mass at my parents' local church.  There was a moment of amusement when the assistants tried to light the pascal candle with a branch from a gum tree, failed, tried again with a smaller candle and narrowly avoided lighting the priest's notes as the candle was passed from the fire to the pascal candle. 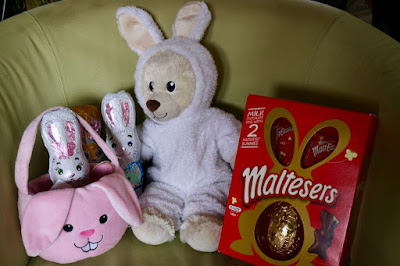 The next morning, I helped my mum bake her hot cross buns.  I made my usual thick cross batter and found it was quite hard to pipe through a narrow piping tip but I managed it.  Her buns looks more professional with the thinner crosses but I still love a good chewy thick cross. 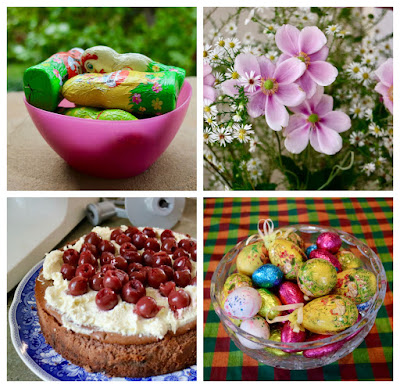 My dad organised an Easter egg hunt for the cousins.  There was some fruitless searching until we realised he had hidden 6 eggs for everyone not 7.  But everyone had fun.  Then we had a big roast dinner for Easter lunch.  I took along a nut roast that I will post about later.  Dessert was a luscious black forest cheesecake and Guinness chocolate cake as well as our nests.  Then the cousins rang around the garden a bit more, as kids will do!

I am sending these nests to We Should Cocoa and Baking Crumbs.

Pour 2/3 of condensed milk into a large heatproof mixing bowl.  Cook on high in the microwave 3 times stirring well after each cooking.  It will smell like boiled milk and then it will curdle and need a good stir to make caramel - it will be thicker in texture but not much darker in colour.  Cool.

Mix caramel with remaining condensed milk, egg while, vanilla, salt and coconut.  It should be a fairly thick mixture.  Spoon heaped tablespoons (about 2 tablespoons of mixture) onto a lined oven tray.  Shape with damp fingers into nests (ie round discs with a dimple in the middle).  Bake for 15-20 minutes until slightly coloured around the edges.  Cool on a wire tray.

Spoon 1 tablespoon of nutella into the centre of each nest and arrange 3 eggs in the nutella.  Keeps for 4-5 days in an airtight container.