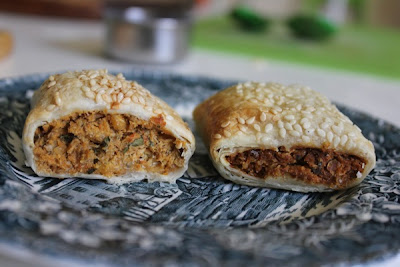 I had odd dreams last night about visiting a cafe that looked great but when I learned to look at it the right way it was a bit like the emperor's new clothes - the decorations were all a sham and just a trick of the eyes.  I was given a bunch of brochures to hand out.  They too were not as they at first seemed.  Once I knew how to look, I found they were promoting some crazy extreme political party. 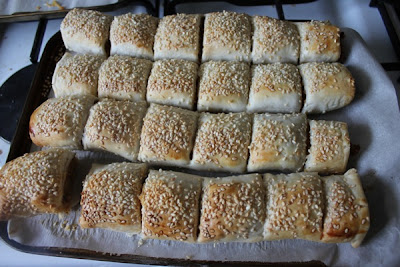 Perhaps the dream was due to my voting in the council elections yesterday.  Or maybe it was my subconscious reflecting on an odd experience of finding my Rennie Mackintosh pendant that I tossed into a drawer after the chain broke recently.  I've worn this pendant almost every day for years.  Yet I couldn't find it.  Perhaps I own too many Rennie Mackintosh pendants.  I just couldn't recognise it among the other pendants.  In fact I thought it was lost.  I chose another.  I found it was actually the pendant I have been wearing daily. 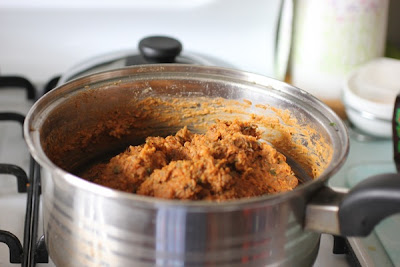 Fortunately for vegetarians and vegans, things not being what they seem is not always a bad thing.  Yes, I am talking about faux meat.  It does make me nervous at times.  I can be more likely to believe my eyes or my tastebuds than my ears.  But when it comes to sausage rolls, I am happy to find that it is possible to make vegetarian sausage rolls that might even fool hardened carnivores.  Take my favourite Vegetarian Sausage Roll recipe (courtesy of Liz O'Brien via Cindy and Michael). 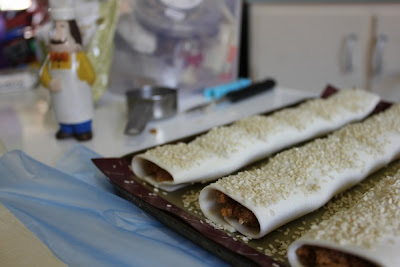 It is a brilliant recipe.  The only problem is that it has nuts in it.  Sylvia's child care centre has a ban on nuts.  As do, or so I have heard, many schools.  Given that Sylvia has a peanut allergy herself, I understand.  Yet it makes it hard to share.  As sausage rolls are such great kids finger food, I am seeking a nut free recipe.  When Cindy and Michael mentioned that a new cookbook by Leigh Drew, Wrapped in Pastry, had a recipe for sausage rolls, I was interested.  Especially when I saw it was nut free as well as vegan. 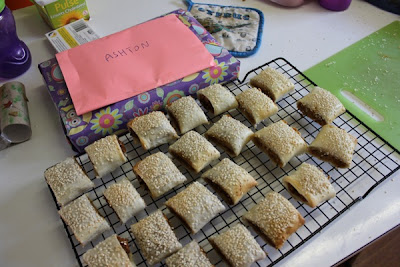 My first opportunity to try the recipe was for my niece Ashton's party.  I made some minor tweaks to the recipe.  It looked meaty, though not as red as Leigh's, but it was not quite right for me.  My main complaint was that the the texture was wrong.  Too pasty.  Not enough structure.  These were far more seasoned than my regular recipe.  In fact I had used less pepper but worried it was too much.  It settled once cooked but I am not sure so much was needed.  The spices seem more meat pie than sausage roll. 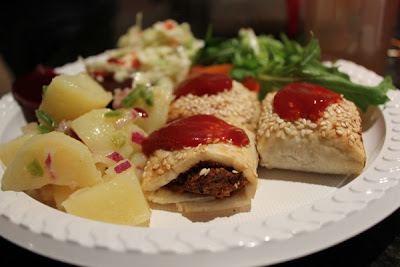 Don't get me wrong.  I enjoyed them.  Just not as much as my regular sausage rolls.  And I am being quite critical because I went on to experiment.  The sausage rolls below are from my nephew, Cooper's birthday party.  I think they might be the Cranks recipe but it is months ago and my memory is failing me.  Let me explain.  Around the time that I was trying these sausage rolls, I asked if anyone had the recipe for Cranks sausage rolls. 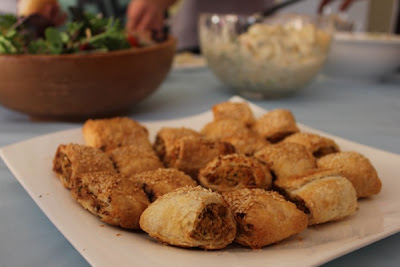 While no one had the recipe for the ones I loved to buy at Cranks restaurant in Covent Garden, a kind reader (thanks Shelagh) sent me a recipe for Cranks Savoury Mix that could be used to stuff sausage rolls.  I was interested to try them.  The recipe was far plainer and stodgier than Leigh's.  I quite enjoyed it, even though I got the seasoning a bit confused when I used nutritional yeast flakes instead of yeast extract.  The below photos is definitely one of the Cranks recipe.  Maybe I will try it again with different seasoning. 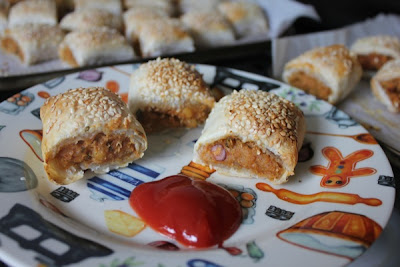 I still had dreams of trying Leigh's sausage rolls again.  The recipe appealed because it was gluten free - and I often take sausage rolls to family get-togethers where there are people with gf diets.  Leigh's recipe had instructed to blend the filling.  I wanted to try it unblended.  It had cooked quinoa which seemed more likely to imitate the texture of meat when whole rather than blended. 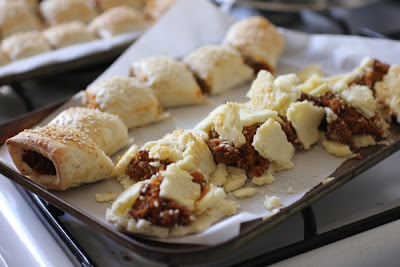 I made Leigh's sausage rolls - part II for my sister Fran's birthday.  As you might have guessed about the above photo, I tried making some gf pastry (using this hot water pastry recipe but with a commercial GF flour) and it was a disaster.  The filling was far more pleasing.  I added less water and more besan, and didn't blend the mixture.  I thought the texture was much improved. 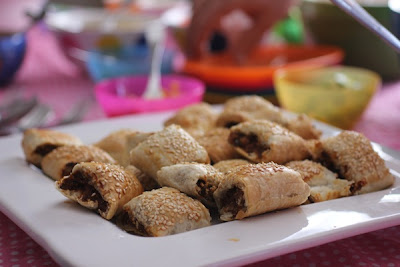 These recipes make a lot of sausage rolls.  I usually end up with leftovers to put in the freezer.  At one stage I had two different sorts, which is why I have a photo at the top of the post of both recipes.  We sometimes take out a few for weekend lunches.  Even better, is having some sausage rolls in the freezer when there is another get-together on. 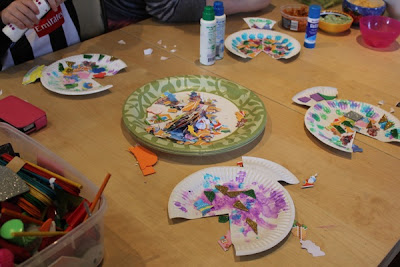 This last photo is of the last occasion where I have taken sausage rolls over the last few months.  It was when we watched the AFL Grand Final at my mum and dad's place.  The match was a nailbiter (and I was glad that Sydney won).  I didn't get to see much of it because I was too busy herding small children.  At half time, the kids made fish out of paper plates and decorated them.  Great craft fun.  And I was pleased to have some sausage rolls for nibbles.  It is great to keep up with tradition, or at least to look like I do.

To make the filling:

In a medium saucepan (with lid on) simmer quinoa in the water and stock powder for about 20 minutes or until (most) water is absorbed.  Set aside.

In a large saucepan, fry onions in oil over medium heat for at least 5 minutes until translucent.  I cooked mine gently over medium low heat while I pottered and prepared the garlic.  Add garlic and stir for about 1 minute.

Place the first sheet of puff pastry on a flat surface and cut it in half, into two rectangles. Spoon the non-sausage mix down the centre third of each rectangle. Brush one long edge with milk and fold in the long edges so the one with milk overlaps the other edge.

Repeat with other pieces of puff pastry. When all pastry is filled, place sausage rolls seam down on a greased or baking-paper lined baking tray.  Brush pastry with milk and sprinkle with sesame seeds.  Use a sharp knife to slash deep marks across the pastry to mark out about 6 sausage rolls. The knife slashes indicate where to cut them after cooking (they can be bigger if you desire).

Bake sausage rolls at 220C for 20 minutes. I cut up the sausage rolls after they are cooked so the ends don’t dry out too much and because they are easier to cut wen partly cooked (esp if you have time to cool a bit first) than when raw.

adapted from The Cranks Recipe Book by David Canter, Kay Canter and Daphne Swann (1985)
Makes about 2lb or 1 kg of mixture

Soak the peas in water (ideally this should be overnight but I poured boiling water on mine in the morning and they were ready by early afternoon). Grate the carrot and onion. Drain peas and add to 450ml or 3/4 pint of water, carrot and onion in a medium saucepan. Bring to the boil, reduce the heat and simmer, covered, for 20 minutes. Add the oatmeal and cook for a further 10 minutes. Remove from the heat and stir in the remaining ingredients. By the time I was ready to stir in breadcrumbs and parsley it was cool and easiest way to mix was by hand because it was quite a stiff mixture. Adjust seasoning to taste.

To make into sausage rolls, follow recipe instructions above on how to assemble.

This post is part of Vegan Month of Food October 2012.  Go to my Vegan MoFo list for more of my Vegan MoFo posts.
Posted by Johanna GGG at 22:45