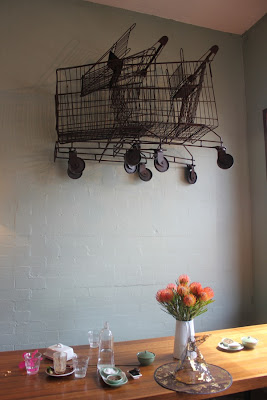 We ate brunch under some rusty shopping trolleys a few weeks back.  Yes this was true industrial chic in a cafe in Brunswick called Wide Open Road.  The old warehouse has been thoughtfully converted.  The space is stylish with some rough edges as a reminder of the history.  The gracefully arched ceilings make it feel spacious but a few judiciously placed walls break up the warehouse expanse into more intimate spaces that made me glad we had left the stroller at home. 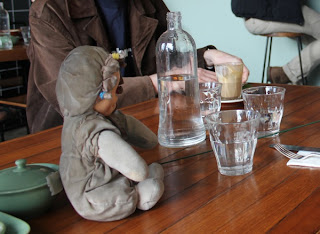 Beforehand we had been to a $2 shop where E and Sylvia bought cheap dress ups and knick knacks.  You can see the witches hat on the table in the top photo.   Wide Open Road was so busy that we had to wait for a table.  Sylvia held up Dolly to admire the tempting display of cakes before she found her place on the table between the flowers and the bottle of water. 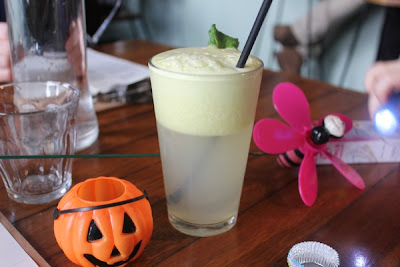 The staff were incredibly busy and yet still attentive.  It wasn't long before we were seated and by then our drinks orders had been taken.  E had a coffee and Sylvia and I shared an apple, pineapple and mint juice.  The mint leave garnish amused Sylvia.  The drink delighted both of us.  Refreshing and satisfying. 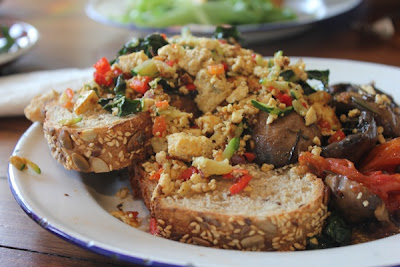 I ordered the scrambled tofu with capsicum, spring onion, cavolo nero (kale) and cumin accompanied by confit tomatoes and mushrooms on wholegrain toast ($16.50).  I worried at first when the scramble smelled strongly of cumin and the tofu tasted plain.  Though the kale hadn't featured as much as I had expected, the confit tomatoes and mushrooms were really juicy and acted like a delicious sauce.  The bread was soft with a chewy seedy crust. All the elements came together perfectly to make an excellent dish. 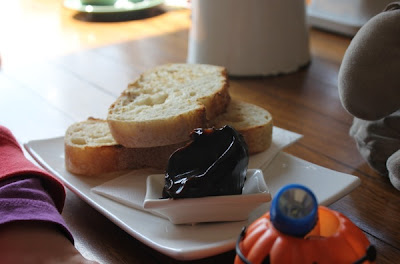 E had an egg roll.  He thought the bread wasn't light enough, which I think means it was decent bread.  Sylvia had vegemite on sourdough toast.  Anyone who has tasted vegemite will be amazed at the chunk of vegemite that came with the toast.  It would have been enough for a year of breakfasts.  Sylvia enjoyed her toast.  It was just lightly golden brown but still soft. 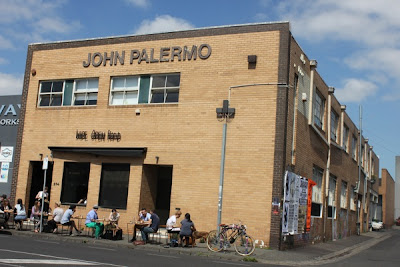 Outside the cafe were bicycles, dogs and smokers.  I assume the name Wide Open Road comes from the song by the Triffids.  However the view is not so much wide open road as suburban shopping centre.  Not pretty but rather convenient to be so close to Barkly Square - affectionately known to its friends as Squarkly Bear.  We left feeling pleased with our meal.  No wonder it was voted 'Best New Café 2011' by The Age Good Café Guide.  Then it was onwards to Radical Grocery and to visit my brother in his new house.

This post is part of Vegan Month of Food October 2012.  Go to my Vegan MoFo list for more of my Vegan MoFo posts.
Posted by Johanna GGG at 10:50