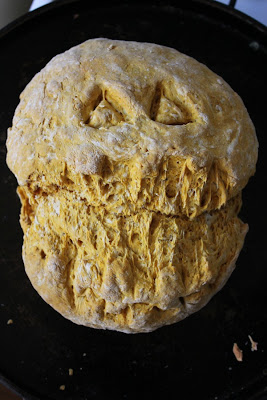 As All Hallows Eve approaches, I am pleased to present you with a spooky pumpkin damper.  Actually I am more delighted that it tastes like the damper that my mum used to make than I am impressed with the scary visage.  Halloween is not a tradition that I grew up with but damper is.  This is also the last Vegan MoFo post for 2012 so I will round up the month of vegan food with some reflections and photos of recipes that I never got to post.

In some ways, Vegan MoFo 2012 was easier than last year.  I knew the drill.  I prepared.  I was even able to finally return to ideas from last year's mofo.  This year we regularly buy soy milk and Nuttalex margarine rather than cow milk and butter, so it was easy to make dairy-free recipes.  I have had more success with vegan cheese that was also fun to experiment with.  Baking without eggs is still a challenge (especially in pancakes), but it is becoming easier.  A few friends doing Vegan MoFo also made it easier.

In other ways, this year was harder.  I seem to be busier than ever.  Work is hectic as we prepare for a big event.  My computer started to play up on me.  Sylvia and I have been poorly.  Spammers have been getting worse.  I have struggled to keep up with reading and commenting on other blogs.

So it is an achievement that I managed to upload 26 Vegan MoFo posts in October.  Not as impressive as last year's 31 posts but far above the minimum 20 posts that I had been aiming fot.  As you will see by some of the photos in this post, I had more recipes and ideas than I had time and energy to write up.
Other highlights included:

Now that Vegan MoFo is over, I anticipate that my blog will quieten down.  We have a big event coming up at work soon and then we are heading to Scotland for 3 weeks starting the last week of November.  That means we will get home just in time to panic about Christmas in Australia.  It all seems a little overwhelming right now but I can't wait for our Scottish holiday.

Given that I will be busy, I have decided to turn on the captcha code for comments.  Apologies to those who do comment regularly.  I hate trying to decipher Google's captcha code myself.  But I am getting so much spam that it is making it harder to moderate comments.

And finally I return to the recipe. For those who aren't familiar with damper (see below picture), this is traditional Australian bush food.  The sort of thing a swagman would cook over his campfire to eat with billy tea.  I found the recipe in a cookbook I picked up at a school fete on the weekend.  It appealed because it was simple and it was a great way to use up the rest of my huge tin of pumpkin puree.

I have only made damper once before in the early days of my blog. The buttermilk and lemon myrtle damper was too fancy and more interesting than authentic.  (Many damper recipes that I see seem to more scone or bread than proper plain old damper.)  Adding pumpkin is not at all authentic.  Yet it filled me with nostalgia.  Ripping chunks of damper from the loaf was exactly what we used to do with my mum's damper.  And though there was a slight taste of pumpkin, the damper tasted plain enough to remind me of my mum's. 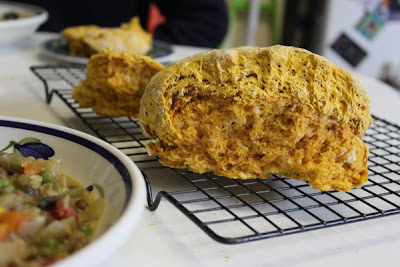 Sylvia proved that she is an Aussie kid and wanted it spread with some vegemite. E was just glad to have some fresh bread of any sort.  I loved some damper with my vegie soup for dinner.

Preheat oven to 220 C and lightly grease an oven tray.  Rub butter into flour and salt in a mixing bowl.  Add pumpkin and slowly add water until you have a soft sticky dough.  Lightly knead on a floured surface.  Shape into a circle about 5cm high and place on greased tray.  Score with a knife a few times. Bake at 220 C for 10 minutes and then bake for another 20-30 minutes at 180 C (See note).

NOTE: the recipe didn't say how to tell it was ready.  I found that I could see where the crack was that it wasn't quite cooked inside.  I returned it to the oven for 20 minutes.  Next time I might baked it at a higher temperature for longer before turning down the oven (but my oven is quite slow at the best of times).  Apart from looking at and tapping the damper, I suggest being alert to when it smells cooked.

On the Stereo:
ABBA Gold - ABBA

This post is part of Vegan Month of Food October 2012.  Go to my Vegan MoFo list for more of my Vegan MoFo p
Posted by Johanna GGG at 21:20