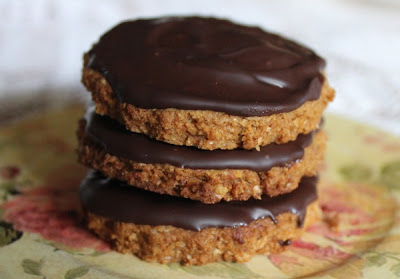 When I first tasted digestives in my 20s I recognised their similarity to Westons Chocolate Wheatens that I loved as a child.  During my travels around the UK and Europe, I often had a packet of McVities chocolate digestives in my bag.  Eating them straight out the packet, backpacker-style was one of the pleasures of life on the road.  Now I love them both for the taste and for the memories of that time.  I am happy to say that I found my homemade version just as pleasing! 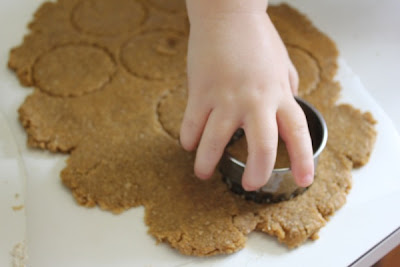 The idea of trying to make my own digestive biscuits came from Kari of Bite Sized Thoughts who posted a recipe for fruit digestives last week.  Then I saw a recipe for pumpkin graham crackers on What Smells So Good while idly searching for pumpkin and chocolate recipes for We Should Cocoa (the event founded by Choclette and Chele but currently hosted by Hungry Hinny).  I recently read that graham crackers are America's answer to Britain's digestives. So it seemed easy to adapt the pumpkin idea to digestives. 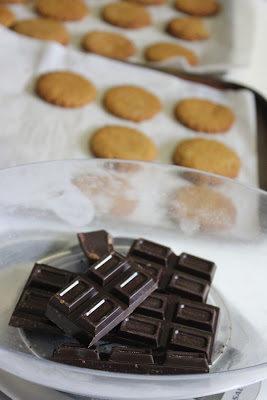 We baked the biscuits yesterday before heading out to lunch.  I had been slightly concerned that the dough was not oiled enough but it wasn't too difficult to handle.  (Wee rascally fingers that were prodding and poking were more of a problem.)  When we got home, we drizzled chocolate over them.  Kari had not thought her texture was quite right.  I added some wheatgerm and loved the rough texture.  And though some were slightly soft in the middle, most were pleasingly crisp. 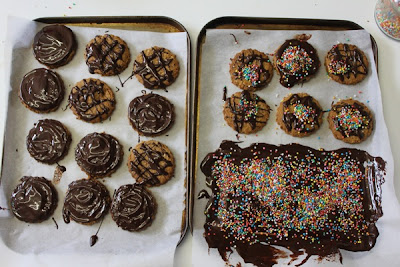 I also found a Daily Mail recipe for Chocolate Digestives.  The photo showe biscuits that were drizzled ever so prettily with chocolate.  I initially set out to do that.  My attempts were just too clumsy.  Finally I found it easier to spread the chocolate on one side, just like the McVities biscuits that I love so much.  Sylvia decided she wanted sprinkles on hers.  I melted 120g of chocolate (72% cocoa) and it was far too much.  So we made square freckles by spreading the remainder of the chocolate on baking paper and sprinkling with hundreds and thousands.

My main problem with the recipe is that it uses so little pumpkin puree.  It was fine when I still have the remains of a tin of pumpkin the fridge but I usually do my pumpkin mash from fresh pumpkin.  I think other purees might work here like applesauce or prune puree.  The pumpkin taste isn't very prominent but it gave some colour and a little added flavour.  I think the recipe would work just as well without the chocolate. 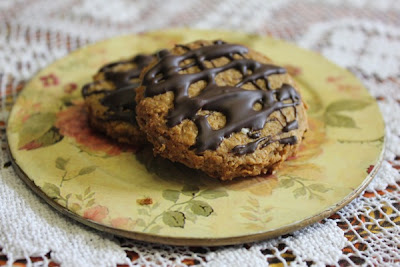 I can't speak highly enough of these biscuits.  They are just sweet enough, taste a wee bit healthy and the dark chocolate stops them being too moreish.  I didn't get a proper count of the batch because at least one disappeared under the table before I got a chance to spread with chocolate.  (It wasn't me.  I swear!)  Tonight as I rode home, it made me happy to think of the biscuit tin of chocolate pumpkin digestives in the kitchen.  It is what every home needs.

Chocolate Pumpkin Digestives
Adapted from Bite Sized Thoughts, The Daily Mail and What Smells So Good
Made about 20

Mix wholemeal flour, wheatgerm, baking powder, bicarb and brown sugar in a medium mixing bowl.  Stir in oil, golden syrup and pumpkin puree until the mixture comes together into a dough.  Briefly knead with a little flour.

Roll out on baking paper until about 0.5cm thick.  Cut into circles (or squares or other shapes if you prefer).  Transfer to two lined baking trays with about 1-2cm between each biscuit (they don't spread much). Bake at 190 C for about 14-16 minutes or until golden brown.  Cool on the tray.

When biscuits are cooled, leave on the baking paper for covering in chocolate (to make it easier to clear up).  Melt chocolate (I did this in the microwave).  Use a teaspoon to either drizzle chocolate artistically or just use the back of the spoon to spread chocolate over one side.  (I found the latter easier.)  Let set for an hour or two.  Keep in an airtight container.

On the Stereo:
The Very Best of Peter Allen: 18 superb original tracks.

This post is part of Vegan Month of Food October 2012.  Go to my Vegan MoFo list for more of my Vegan MoFo posts.
Posted by Johanna GGG at 23:45