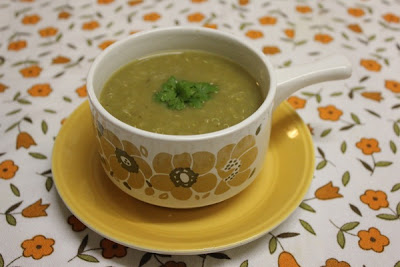 Spring heralds the arrival of asparagus in our lives.  Asparagus usually means sunny days.  It begs to be eaten fresh or barely cooked.  I am not keen on cooking it too much.  So pureeing it in a soup, based on Rachel's asparagus, potato and pearl barley soup, was a revelation.  Perfect for a busy weekend of rain, a tulip festival and some mermaid craft. 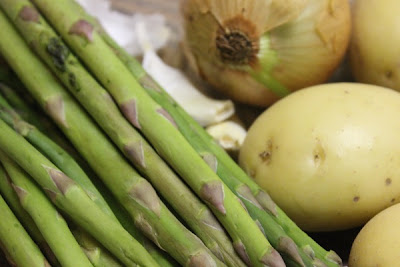 It was a frugal soup that used up old vegies.  The onion had a mould spot that had to be cut out, the potatoes were beginning to grow eyes, the stock was made of food scraps, I ameliorated the slight bitterness in the stock with leftover tofu bacon marinade, and the asparagus needed to be used.

The original recipe used pearl barley but I opted to use the quinoa in my pantry rather than buy another grain.  It worked marvelously.  Perhaps it was less creamy than barley but, quinoa was lighter, gluten free and full of protein.  Cooking the quinoa separately meant that I could give some of the plain quinoa to Sylvia.  It also added a pleasing slightly nutty texture. 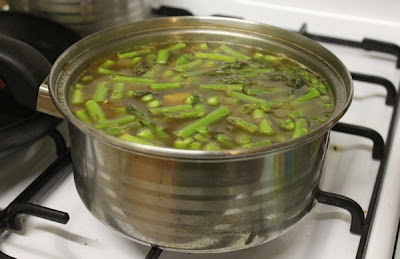 Best of all, the soup lasted a few nights.  It was wonderful to come home after busy days on the weekend and enjoy a warm nourishing bowl of soup.  On Saturday, we visited the Tesselar Tulip Festival in Silvan.  The sight of rows of vibrant colour was glorious.  It would have been so much more impressive in the sunshine. 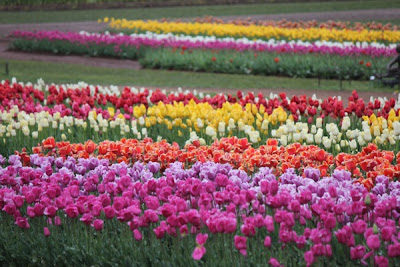 We had decided to visit yesterday because it was our only free day during the festival and the Irish weekend sounded like fun.  Unfortunately it was a rather soggy sight.  We ate at the Tulip Cafe, whose main charms were a roof and a heater.  My tomato and basil soup wasn't a patch on the soup at home in the fridge.  We enjoyed some Irish music and walked among the rows of tulips when the rain eased off slightly.

Like others, we had coats, hats, an umbrella and muddy shoes.  It was so cold that Sylvia asked to go home because her hands were freezing. She did enjoy seeing the alpacas and the pick your own tulips.  We left with a bunch. 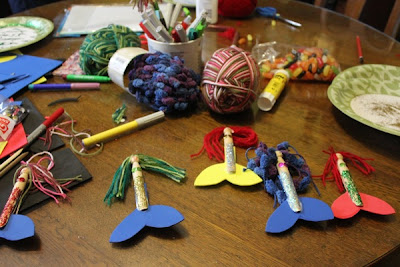 Today, we had a roast dinner, pav and sponge for lunch at my mum and dad's place.  I had promised Sylvia that we would make clothes peg mermaids that I had seen on Red Ted Art's Blog (from clothes pegs, wool, sequins, glitter and foam sheets).  I wasn't very organised.  It was chaotic, but fun.  Not such an easy activity for the younger kids but my older nieces enjoyed it. 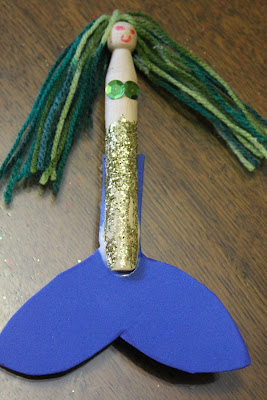 I took a gluten free version of the Parmesan, Polenta and Thyme Crackers, made by substituting chickpea flour for wheat flour.   I am working on a vegan version but my first attempt was not great.  The texture was too crumbly and the salt remained in chunks.  More experiments are required.

I am sending this to Ricki for her Wellness Weekends event that features amazing healthy vegan food each week.  This weekend is the Canadian Thanksgiving Weekend edition.  Happy Thanksgiving to Ricki and other Canadian readers.

Brown the onions in olive oil in a large saucepan.   Add garlic and potatoes.  Fry an additional minute or two (or a few more if, like I did, you are still defrosting the stock in the microwave so you can tip it out of the tubs).  Add vegetable stock and simmer for about 30 minutes or until potatoes are really soft.

While the soup is simmering, place quinoa and 1 cup of water in a small saucepan.  Cover and bring to the boil.  Stir and simmer on a very low heat for about 20 minutes or until quinoa is soft and water absorbed.

When potato is cooked, add asparagus to the soup and simmer about 10 minutes, or until asparagus is soft.  Blend until smooth and then add cooked quinoa.  Serve warm.

On the Stereo:
Don't Try This At Home: Billy Bragg

This post is part of Vegan Month of Food October 2012.  Go to my Vegan MoFo list for more of my Vegan MoFo posts.
Posted by Johanna GGG at 23:15