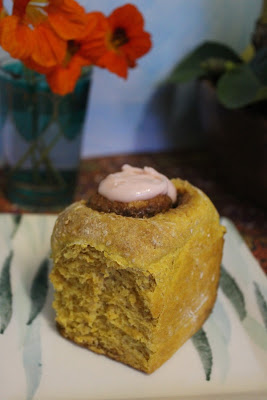 Pumpkin scrolls have been on my to-do list forever.  Or so it seems.  How many times have I drooled over the ones on Don't Eat Off the Sidewalk.  How many times have I promised myself I will make them.  Then I chicken out because they seem full of butter and sugar (especially when the recipe suggests having your fat pants on the ready)!  Then serendipitously I saw a healthier version of the recipe on The Lives and Loves of Grumpy's Honeybunch and a really useful Pumpkin Cinnamon Roll showdown on La Vida Vegga.  This time there were no broken promises. 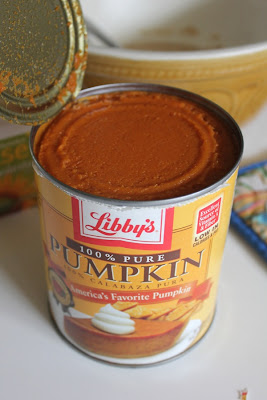 I also had some tinned pumpkin puree to experiment with.  I usually buy my pumpkin fresh but was curious about the tinned stuff I read about on blogs.  It was garishly orange and quite thick but it just missed some of that sweet pumpkin flavour that I associate with the fresh stuff.  If I were to make the scrolls again I would probably just use my homemade mashed pumpkin. 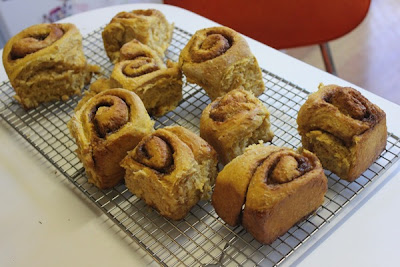 Making the scrolls was an interesting experience.  It was a challenge patting out the dough into a square because Sylvia kept grabbing handfuls from the corner for her scroll.  And I melted rather than softened the butter in the microwave.  This meant that the butter oozed out as I was cutting the buns.  Next time I will make sure it is merely softened.  (Though I notice Smitten Kitchen uses melted butter in her scrolls.)  I was excited to try Grumpy's Honeybunch's method of cutting the scrolls.  Although my scrolls were not even and uniform, this way of cutting didn't press down on the dough like I usually find with my knives.

The scrolls smelled fantastic in the oven.  Warm yeasty sweet spicy aromas filled the kitchen.  They tasted delicious, not over sweet but quite filling.  After all there was enough butter and sugar wrapped in these to soften the insides.  These were more like the Coffee Scrolls that I grew up with than the Saint Cinnamon scrolls that dripped a sweet buttery filling.  (NB Coffee Scrolls are a bit like Chelsea Buns in the UK, and they mostly don't contain coffee.) 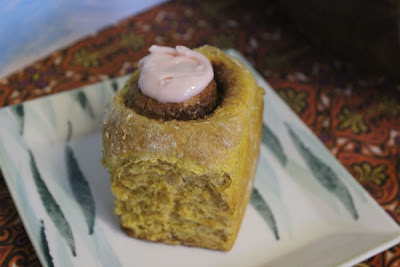 I dobbed on a restrained blob of icing that was leftover from a cake I made about a month ago.  I am not much of an icing person.  In fact this is the third time I have used this batch of icing that has sat in my fridge for quite some time.  Coffee scrolls don't have a lot of icing.  I sometimes wish I could make their icing for nostalgia's sake.  Then I am worried at finding out what is in it.  It tastes so artificial.

Both E and Sylvia loved these scrolls with icing.  I was quite happy to take a scroll to work for morning tea without any icing at all.  Butter wasn't mentioned but I think my parents would have served these cut in half with some butter in the middle, like Coffee Scrolls are often eaten.  We also enjoyed eating these for breakfast. 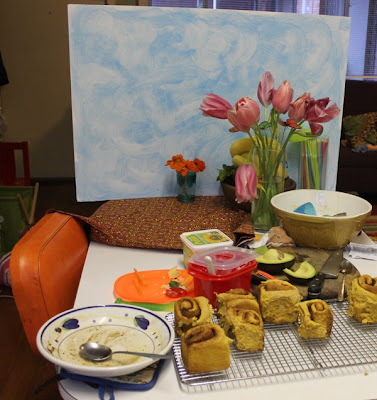 Lastly I thought I would step back from my close up and show you why I love close up photography so much.  Here is my kitchen table where I was taking the photos.  It was a chaotic end to a busy day.  I'm having fun playing around with backgrounds and colours in my photos and thought you might like to see one of my new 'toys'.  I have recently bought a cheap foam mat from a craft store.  It has helped shut out some of the clutter in my backgrounds but I found the white a bit stark.  Recently I took a kitchen sponge and some of Sylvia's craft paints and painted it blue.  Yes this is food props on the cheap!  And the little orange flowers were brought to Sylvia by her little friend across the road.  H picked them from his garden himself.  How sweet!

I am sending these to Susan of Wild Yeast for her weekly YeastSpotting event.

﻿Pumpkin Spice Scrolls
Adapted from The Lives and Loves of Grumpy's Honeybunch and Baker Bettie
Makes 9
Filling:
Place warm milk, sugar, salt and yeast in a large mixing bowl.  Set aside for 5-10 minutes to allow the yeast to start blooming.  Add pumpkin, chia seeds, water, melted margarine, and flours.  Mix into a soft dough.  Knead on a floured board for 5-10 minutes (I did 5), adding around 1/4 cup of flour until the dough is smooth.  warm milk, sugar, salt and yeast 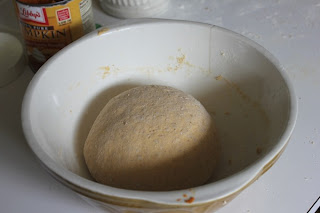 Cover with a tea towel and set aside in a warm place to prove for about 1 hour or until doubled. 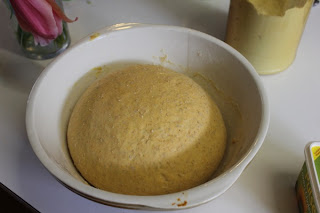 Punch down dough and knead briefly.  Pat or roll out dough into a rectangle of 16 x 12 inch.  (I used the blue ruler below to help get a sense of the size.) 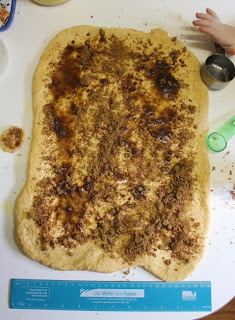 Spread softened butter over the roll.  Mix together the brown sugar and mixed spice.  Sprinkle evenly over the butter.  Roll up the dough starting at the long end. 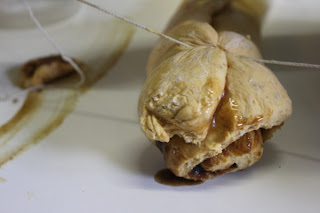 When dough is rolled, cut into 9 pieces.  I did this using Grumpy's Honeybunch suggestion of the 'dental floss' method.  She used unflavoured unwaxed dental floss.  Fishing line would work brilliantly.  All I had was some kitchen string.  Pull it under the dough and bring it up and around the piece you want to cut, pulling it across so that it slices through the  dough. (see photo above)  Or use a sharp knife to cut the 9 pieces if you prefer. 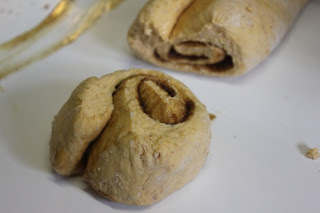 Once your pieces are sliced (and hopefully you have not melted your butter and had it ooze out everywhere like mine), place the scrolls in a greased 20cm (8 inch) square cake tin. 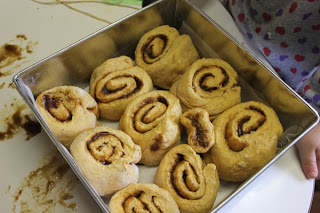 Cover and set aside in a warm place to rise for about 45 minutes. They should be more snuggly at the end of this time. While the scrolls are rising, preheat oven to 180 C or 350 F. 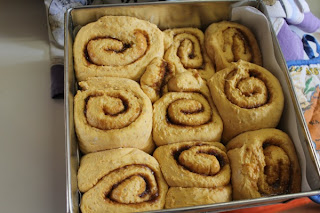 Bake for 30-40 minutes or until golden brown and they sound hollow when tapped.  (I was concerned about the middle scrolls not cooking through and my oven is a bit slow so I did 50 minutes.) 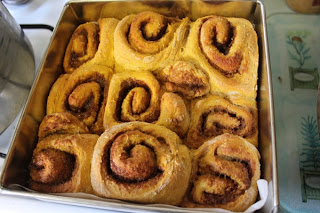 Tun out onto a rack to cool.  Once cooled, if desired serve topped with a dob of icing (I used some cream cheese frosting I had leftover but just some icing sugar, margarine and a dribble of hot water would suffice) and/or slathered with butter.  Best eaten on the day of baking or the next day.  These
role into 16 x 12 inch

This post is part of Vegan Month of Food October 2012.  Go to my Vegan MoFo list for more of my Vegan MoFo posts.
Posted by Johanna GGG at 23:45