A corny picnic with mint 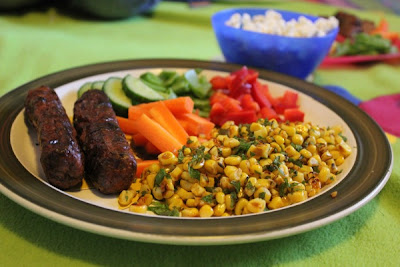 After a busy day at work and riding my bike home, I was tired.  E was out.  I was going to make bangers and mash that he usually makes each week.  Yet the thought of making mashed potato was too much effort.  On impulse I made some microwave popcorn.  Then I checked my bookmarks and found a recipe for Caramelised Corn with Mint. 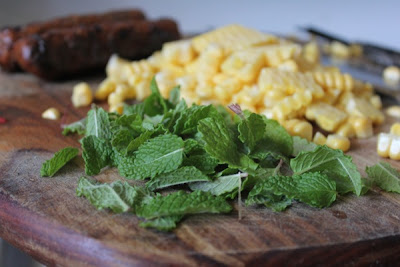 A warm spring day, a break from routine, and the holiday smell of popcorn made us giddy and light.  Sylvia and I danced and ran out to the backyard to pick mint.  I spoke to the neighbour about flat tyres on her bike.  We threw a rug on the loungeroom floor and had a picnic dinner on the floor.  We made lizards and caterpillars out of our food.  We fed Sylvia's dollies (new dolly and her new companion, Peppa Pig) and played with the rabbit in a carrot. 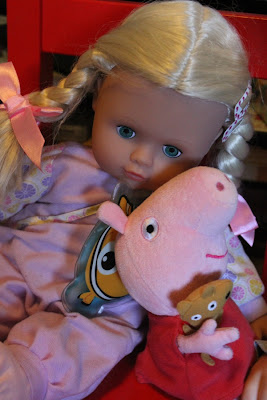 All this merriment was topped off by watching Billy Bragg on Q and A.  I would have loved to see him while he has been in Melbourne, but am just not organised enough.  Instead, I was very pleased to see him singing Ideology live on the telly.  (The same sort of pleasure as standing around a colleague's computer at work cheering at our Prime Minister Julia Gillard's Misogyny speech.) 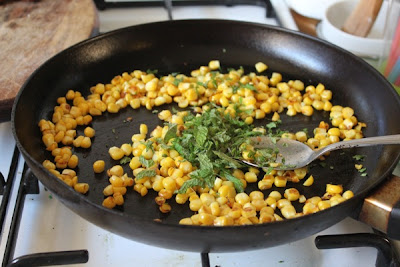 The corn with mint was wonderful.  So simple, so quick and so delicious.  I ate it with vegie sausages and chopped salad vegies.  It was all I needed for dinner.  I am sure I will make this side dish again.  Yet I am not sure it will ever again be as much fun.

Caramelised corn with mint
serves 1 as a side dish

knob of margarine or butter (between 1 tsp and 1 tbsp)
kernels of 1 cob of corn
handful of mint leaves, chopped
pinch of French lavendar salt (or sea salt)

Melt butter on frypan over medium heat.  Fry corn for about 10 minutes or until starting to brown and popping.  Add mint and salt.  Stir briefly and remove from heat.  Eat hot.  (Probably would be yummy at room temperature too.)

On the Stereo:
LoveBUZZ: Hummingbirds

This post is part of Vegan Month of Food October 2012.  Go to my Vegan MoFo list for more of my Vegan MoFo posts.
Posted by Johanna GGG at 10:12