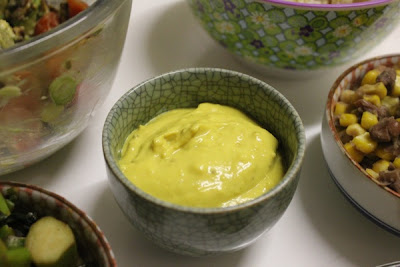 I've got ahead of myself.  I was so excited by my shamburger pizza and my facon tacos that I omitted to tell you about the cheeze sauce that I used.  Perhaps I was less enthusiastic about the actual sauce because I made it for some black bean, avocado and cheeze quesadillas that were a flop.  In hindsight, I think the fillings just didn't work, rather than that the sauce was a complete failure. 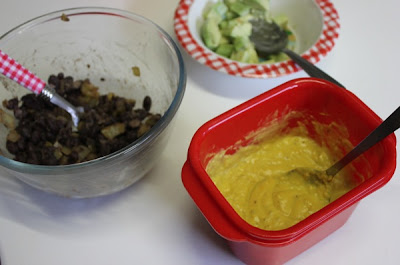 I added some fried onion and spices to the black beans but they just needed more flavour.  The sauce didn't help.  I overlooked that Susan (I found the recipe at Fat Free Vegan ) added some salsa.  Without the added sweetness, my sauce was overwhelmed by the mustard.  In frustration I added more lemon juice and some liquid smoke.  Then I flung the sauce in the fridge.  The next day, when I reluctantly used the sauce, I was pleasantly surprised. 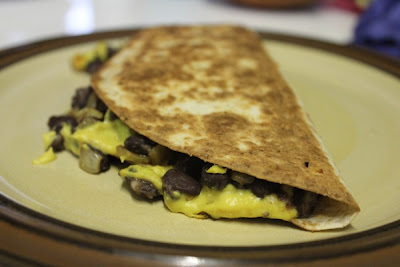 I need to revisit the quesadillas some time. They are a great quick meal.  In fact, I made them last week when E was home briefly between work and ukelele rehearsals.  I had dinner on the table in the blink of an eye and he was able to scoff them down easily before running out the door.  Now I just need to make them a bit more tasty.  Maybe I need to take Susan's advice and add a generous dollop of salsa.

Place ingredients in a small saucepan and blend.  (If you used milk rather than silken tofu you could probably get away with a good stir rather than blending.)  Simmer for a couple of minutes until the mixture thickens.  Or (as I did) microwave for about 2 1/2 minutes, stirring after each of the first two minutes.

This post is part of Vegan Month of Food October 2012.  Go to my Vegan MoFo list for more of my Vegan MoFo posts.
Posted by Johanna GGG at 22:02