Shamburger pizza with the lot

Recently I was inspired by Adam's glorious photo of his vegan cheeseburger pizza at Keen on Food.  I thought about the burgers that were popular in Australian fish and chip shops before fast food giants arrived on our shores.

A traditional Aussie hamburger was a meat patty in a bun with lettuce and tomato.  Extras included cheese, bacon, pineapple, beetroot and egg.  If you had everything, it was called a hamburger with the lot.  If you do a vegan version then it is a shamburger!   Why not add it to a pizza! 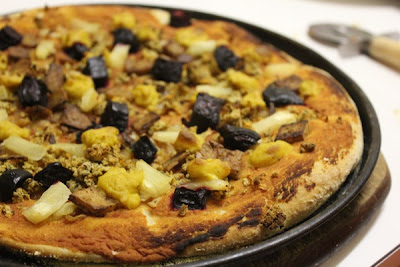 My Shamburger Pizza with the Lot was of tomato sauce, fried onion, crumbled nut roast (my favourite veg 'meat'), tinned pineapple, roasted beetroot, tofu bacon and blobs of cheeze sauce on my favourite fast track pizza bases.  Perfect to watch in front of Scooby Doo and the Loch Ness Monster.

Actually I didn't quite have the lot.  I didn't do an egg.  If I had time and ingredients, I would have tried to make a very yellow vegan omelette and a very white one and arrange them on top like a fried egg.  I only thought of it after I made the pizza.

The Shamburger pizza was delicious.  We also had one with a blanket of dairy cheese.  I preferred the vegan version that was lighter and a better balance of flavours.  The only problem is that, like other vegan pizzas I have tried without melty cheese, the ingredients were more likely to fall off.  Quite fitting really, as it hard to eat a Hamburger with the Lot without wearing half of it in your lap!

This post is part of Vegan Month of Food October 2012.  Go to my Vegan MoFo list for more of my Vegan MoFo posts.
Posted by Johanna GGG at 00:00