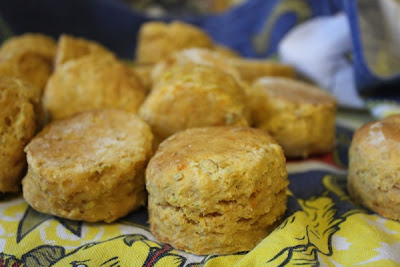 I meant to make Kari's sweet potato chickpea and hemp seed burgers.  I steamed the sweet potato in the microwave and mashed it.  We were distracted by making three little pigs out of pink foam (to go with the house pictures we had been making).  I thought of putting the remains of my chickpea and hemp seed cheeze in the burgers.  Maybe not.  But there was a great recipe for Pumpkin Cheeze Biscuits (Scones) that I had discovered during Vegan Mofo.  Scones would go with the burgers and salad. 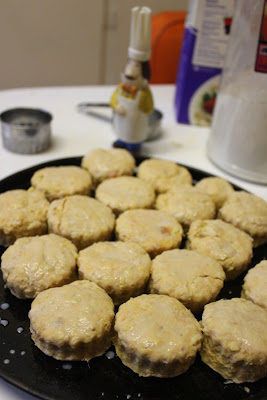 E bathed Sylvia while I made the scones.  Finally I decided I didn't have the time or energy for the burgers.  The scones and a simple salad would do just fine.  Except I had opened a tin of chickpeas.  They went into the salad to give dinner some muscle. 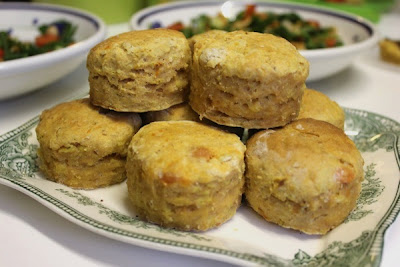 I make scones quite regularly and found that this recipe wasn't quite right for the way I do it.  Perhaps this is due to the Australian-British vs American biscuit vs scone divide.  I had to add extra milk because the dough was too dry and my mum has taught me to make sure there is enough milk to make a soft dough.  I also found that the temperature was much lower than usual.  My recipe notes take these into account.  The original recipe used mashed pumpkin and this could easily be substituted for the sweet potato. 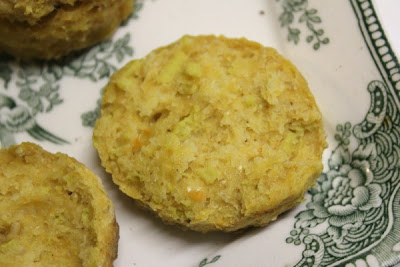 I ate my scones plain.  Until Sylvia decided they needed promite.  (She is a bad example!)  E had his buttered.  Then he ate a leftover scone topped with leftover salad.  That seemed a bit weird!  However, I never complain when everyone loves the scones I bake.

Place vinegar in a measuring cup and fill up to 2/3 cup.  Set aside to thicken and curdle.

Mix dry ingredients in a mixing bowl.  Rub in the margarine until it resembles fine breadcrumbs.  Stir in grated cheeze.

Mix the milk and sweet potato.  Make a well in the cheeze mixture and pour in the sweet potato mixture.  It will be quite moist and sticky.

Turn out onto a well floured bench and lightly knead with lots of flour.  Press out to about 1 1/2 cm and cut into rounds with a scone cutter (or a glass if you don't have cutters) that has been dipped in flour.

Bake for between 15-25 minutes (it took me 25 minutes but I will bake at a higher temperature next time which should reduce the time they take to bake).

Wrap warm scones in a teatowel.  Best eaten warm but will be fine to eat the next day.

On the Stereo:
The Good, the Bad and The Queen: self titled

This post is part of Vegan Month of Food October 2012.  Go to my Vegan MoFo list for more of my Vegan MoFo posts.
Posted by Johanna GGG at 22:41