From Disaster to Parfait 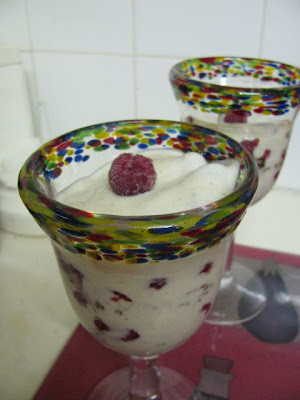 Yesterday morning I had a kitchen disaster. Ever since seeing that Frances had made Heidi’s Animal Cracker Cookies, I have wanted to make them. I am not keen on plain cookies or biscuits (as we call them) but I loved the idea of almond meal and coconut in the biscuit. I made a disastrous attempt to bake them yesterday in which I broke every rule in baking. Fortunately in the evening I had an epiphany and turned them into a wonderful parfait that was pronounced ‘splendid’ by E.

I had initially got excited about this recipe because it looked like one that I could make with my new icing gun which doubles as a cookie press. I wrongly assumed that any biscuit dough that is rolled out would be piped out through the cookie press. I also was shamefully slapdash about the recipe and method.

It was not my finest moment in baking. I just put everything in a bowl and mixed it together – rather than mix the wet and dry ingredients separately first. I decided to substitute canola oil for coconut oil. The dough was too dry to come together in a ball. I added more oil and then a dollop of molasses. It was a greasy mottled-patterned ball. I mixed and kneaded it too much in an effort to get the it all mixed and smooth. All this was done in a rush while Sylvia was playing on the rug. So I didn’t let the dough sit at least 1 hour.

By the time I got to my cookie press I wasn’t surprised it wasn’t working. Nothing else had gone right. I got a few crumbly blobs of mixture and a dribble of oil before I gave up and just made round discs. 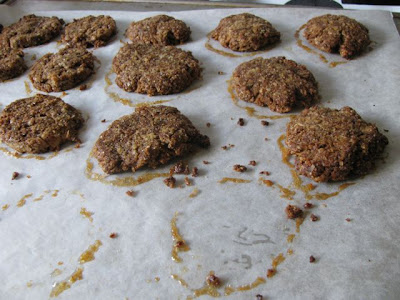 I then scrubbed the shower while they baked. I tell you this so you understand that my mind wasn’t really on timing. I heard the timer buzz but spent a few more minutes finishing up, then rushed to take them out of the oven and give Sylvia my attention. I left them to cool on the oven tray rather than on a wire rack.

When they came out of the oven it was obvious that I had added too much oil because they had little crusty oil rings around them. Nevertheless I tasted them while holding Sylvia. Warm, they tasted lovely –yet again supporting my belief that everything tastes good freshly baked from the oven.. The texture was interesting and the molasses added nicely to the flavour. But when they cooled the ones that had been at the edges of the baking were a little too crisp.

Then inspiration struck as I was preparing dinner in front of MasterChef. I have been eating quite a bit of King Island Honey and Cinnamon Yoghurt lately but didn’t have any on hand. I did however have plain yoghurt and frozen strawberries. So I added my own honey and cinnamon, crumbled the biscuits and layered it all together in a large wine glass before we sat down to dinner. After dinner we had the parfaits. The presentation wasn’t up to MasterChef standard but they were delicious. Sweet. Tart. Creamy. Crunchy. Smooth. 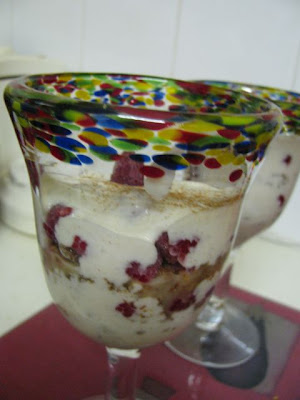 These parfaits were also very filling and, while they served the two of us, they could have served four people. These made a quick and easy dessert for a summer evening. But great in winter too. I am not recommending you make such a bodgy job of the biscuits but if you have any disasters baking them, you could rescue them in just such a way. I have written what I did below as a reminder of what not to do. In future I will need to find a more satisfactory way of substituting for the coconut oil that Heidi used, or purchase some.

Parfaits are not something I am very familiar with. When we were young we used those long handled parfait spoons for spooning tinned food into the dog’s bowl. So in our house they were called ‘Pal Spoons’. No one wanted to use them for anything else. (Just like we had avoided the cup that the dog once drank out of.) I remember once going to my nan’s place and being served a dessert with parfait spoons. We looked down and started laughing at the Pal Spoons.

I’d like to say that I am older and wiser now. I’m not sure I want to make such claims but I can face a parfait spoon without giggling. And I am glad that it was the biscuits rather than me that crumbled under the pressure of the kitchen disaster. It all seemed worthwhile once I tasted that parfait.

To Make Biscuits:
Mix all ingredients together til they stick together enough to roll into a ball. Knead briefly and make into two long cylindrical rolls. Slice into discs and place on a greased or lined baking tray. Bake for about 15-20 min at 180 C. They are best to eat alone if still a little soft when they cool but excellent in the parfait if a little crisp.

On the Stereo:
The Crane Wife: The Decembrists
Posted by Johanna GGG at 22:23