SHF Apricot sponge – by any other name 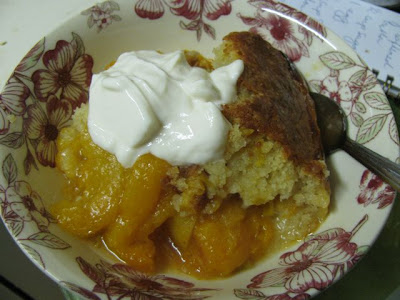 When I was little, my mum made apple sponge all the time. Less frequent was apricot sponge but when she made this for sweets I got very excited. I have written before of my love of apricots so I wont go into it again, suffice to say that apricot desserts delight me as much as chocolate desserts.

Recently I was talking to my mum about desserts. She said she had made a steamed pudding with jam recently. I said she must give me the recipe because I have fond memories of these. She wrote down a list of ingredients for me. I then asked if she could give me a recipe for apricot sponge while she was at it. She told me that I just had to use the same recipe for the cakey sponge and put some apricots in the bottom of the dish. (Actually it has quite similar ingredients to my Chocolate Pudding and Butterscotch Pudding but with fruit instead of sauce.) 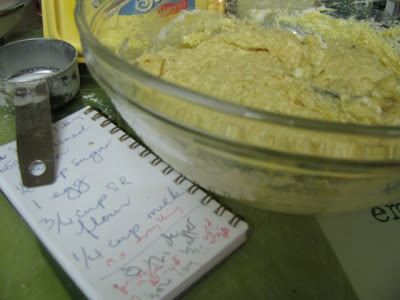 I couldn’t wait to try it. A few more conversations with my mum followed. Such as, how long do you cook it? She said if I heated the apricots while I made the batter it would take 30 minutes and if not then it would take 45 minutes. It took me 75 minutes, which maybe because I have a doddery old oven and my mum has a new burn-baby-burn model.

I found that a tin of pie apricots is 100% apricots, unlike the tinned apricots in syrup I had to drain to use for my apricot crumble. I used two tins, which gave a lot of fruit, perhaps too much for E but I love it. Afterwards I checked about what apricots she used. She said pie apricots were fine but if they weren’t sweet enough then just add some sugar. Such common sense goes out the window sometimes when I am trying to follow a recipe. I hope to one day stew my own apricots for these desserts. Of course, this sponge recipe can be used with other stewed fruit such as apples. 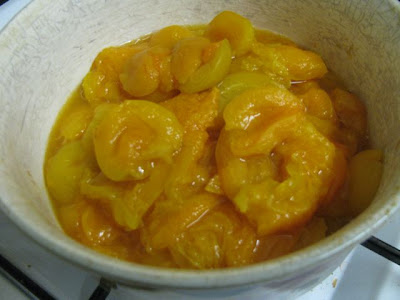 I did enjoy the apricot sponge but it wasn’t quite the nirvana I had been expected. The extra cooking time was frustrating because I was worried Sylvia would wake up. I also think the apricots were a little tart. But I still really enjoyed that soft meeting point between the cake and fruit. The contrast between the fluffy sponge and refreshing juicy apricots is also something I love. I served it with honey and cinnamon yoghurt but when I was little I ate it with no accompaniments.

I have called the below recipe, Apricot Sponge Pudding, but in our house it was always just Apricot Sponge. Just as ‘A Sponge’ was a sponge cake. But when I met E, it all got very confusing. In the UK his sponge is more like a butter cake or pound cake whereas my mum’s sponge is light and fluffy with lots of eggs, no butter and so little flour that she leaves it out to make it gluten free for my niece these days.

We called dessert, ‘sweets’ but, to E, sweets were what we call lollies and Americans call candies. Lollies to E were what we called icy poles and Americans call popsicles (so I don’t know what he made of our ‘boiled lollies’, which are those hard sweets you can suck all day like gobstoppers). And if I said I had a bag of chips he thought I meant hot chips rather than what he called crisps.

I was thinking of this gap in translation when I was recently reading Susan’s post on the differences between crumbles, crisps and cobblers and I realised that my sponge pudding is probably what Americans call a cobbler. Their idea of a pudding seems to be cold and creamy whereas my pudding is a warm cake (although we also have chilled ‘summer pudding’ so I don’t know where that fits). But the Brits use pudding to refer to all desserts, which we call sweets, which, as I mentioned above, E calls lollies. It is all so confusing but all tastes so good. 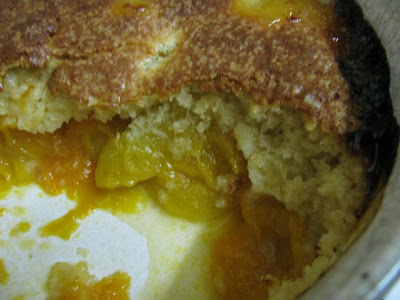 I am sending this apricot sponge to Sweet Tooth who is hosting Sugar High Friday, the event founded by Jennifer of Domestic Goddess. Sweet Tooth has asked for our favourite dessert. I confess I don’t have just one favourite. But I thought she would like one of the many wonderful desserts that I love .

Mix the butter, sugar, egg, flour and milk to make a thick batter. Check apricots for sweetness – if they are not sweet enough, stir in some sugar to taste. Spread apricots at the bottom of a greased medium sized baking dish. Spoon the batter over the apricots and smooth. Bake for 45-75 minutes at 180 C till the batter is cooked (I checked with a skewer but the ultimate test was digging the serving spoon in and finding it was uncooked).

On the Stereo:
The Velvet Underground and Nico
Posted by Johanna GGG at 10:32