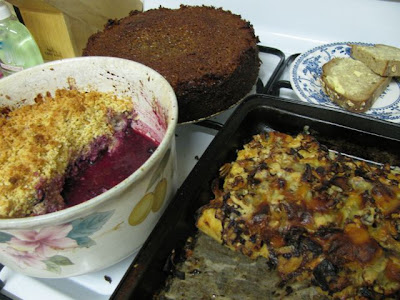 We have just finished watching our Tripods DVD boxset. It was a strange BBC adaption of a science fiction novel about aliens who have stopped the human race from their dangerous technology by using caps to make them docile. The outfits look like the sort of fancy dress that my friends and I might have come up with when we were kids (eg a blanket tied with a dressing gown cord) but the scenery is superb. The tripods are wonky models but their city has a sense of wonder. Unfortunately the third series was cancelled due to the series being too expensive and too slow. The ratings showed that it was not to everyone’s taste.

Not everyone appreciates something a little different. Some people are happy to have meat and potatoes every day, or so I am told. I am not one of them. I love having lots of variety in my diet and experimenting with different ingredients and flavours. No could accuse me of being boring on the weekend when we had a bizarre gnocchi and a strange sort of crumble. 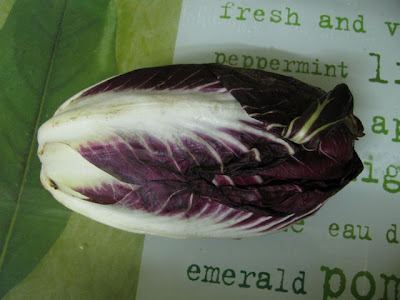 Would you be excited if told I was making gnocchi with mouldy cheese and bitter lettuce? I don’t know that E was overly enthusiastic after I gave him a piece of radicchio to taste. It was horribly bitter when raw. I've never used it before so I didn’t feel brave enough to chop it into 6 wedges and instead I sliced it into ribbons. Cooked, it actually was quite mellow and flavoursome. As for blue cheese, it never loses its taste. I was a little worried how the gnocchi would taste so I added some roasted cauliflower I had on hand and chopped up a pear. 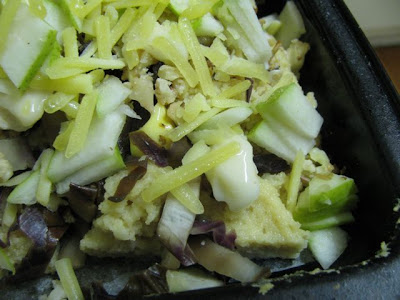 Once I looked at my gnocchi I realised that the little pillows of semolina had disappeared under all my toppings. Oops. I don’t think that was meant to happen. The picture of Karen Martini’s recipe in the Age’s Sunday Life magazine showed lots of crispy gnocchi. Mine was a pile of crispy and interesting vegetable toppings with soft gnocchi underneath. I also found out I had run out of parmesan cheese and decided I should use some of the nutritional yeast in the gnocchi mixture. It gave a nice flavour but I would probably prefer the parmesan.

We served the dish with Brussels sprouts and a warm beetroot dip. The recipe’s suggestion of serving this with meat seemed odd. It needed vegetables! I don’t think we ate the gnocchi as intended but it was surprisingly pleasing. 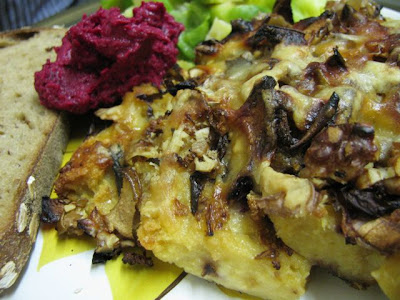 I served a gluten free dessert so if you wanted a gluten free meal, you could substitute cheesy polenta slices for the semolina. Of course, you also would not serve it with bread like we did. And in case you are curious, the photo at the top includes an apple and date cake that I recommend you try because it was so good.

Dessert was a berry and coconut crumble I had found in the Women’s Weekly. It appealed because I have been interested in gluten free crumble toppings and trying out different ideas lately. Berries, coconut and lime is a tropical summery combination which seemed a little odd in a warming winter dessert. Nevertheless I enjoyed it. 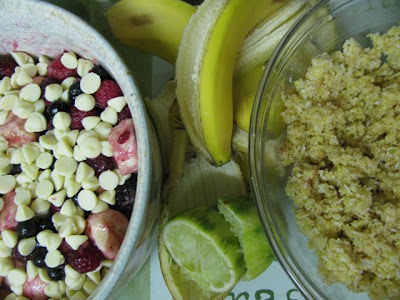 I couldn’t resist substituting some banana for the berries but didn’t chop it up enough. I had naively thought that it would break down more over an hour in the oven but it didn’t so next time it will be in smaller pieces. The recipe was next to another one for rhubarb and white chocolate crumble, but the chocolate idea seemed more appropriate for the berries so I threw in a handful of white choc chips. 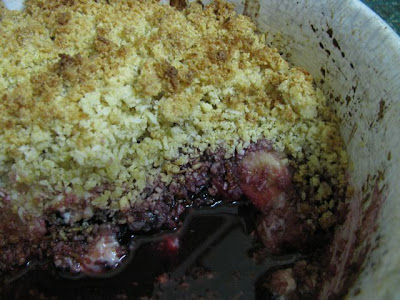 I love berries and could have just eaten the lime flavoured berry mixture. It was deep red and full of delicious juice. The crumble was particularly light rather than the dense oaty crumbles I usually make. And I loved the creamy white chocolate oozing between the fruit and crumble in small pockets of sweetness. E found the crumble a bit intense – I think there was a bit too much fruit for him. He found it more palatable the second night when he had bought some cream to serve with it. But I think it was delicious without cream. The leftovers were very tempting but I was glad we left it for the next night because there is only so much one can eat of such berry goodness.

Baked gnocchi with radicchio, gorgonzola and walnuts
(from Karen Martini in Sunday Life, The Age, July 2009)
Serves 4 as a main

Blanch radicchio by placing in a bowl and pouring boiling water over it. Leave two minutes and then drain.

Bring milk to boil in a medium saucepan and slowly add semolina over medium heat, whisking as it is added. Cook stirring frequently for about 15 minutes or until mixture comes away from the side. Remove from heat and whisk in eggs and half parmesan cheese (or nutritional yeast). Spread into a lined lamington tin (28 x 18cm or 11 x 7 inch). Use the back of a spoon to smooth as much as possible (this wasn’t easy for me). Place in the fridge to cool. (Just an hour or two should be fine).

Cut gnocchi into squares. Arrange on a baking dish – I used the same lined lamington tin (Karen Martini says to use a ceramic dish). Sprinkle toppings over gnocchi, radicchio, pear, cauliflower, butter, gorgonzola, walnuts and remaining grated cheese on top. Bake in 220 C oven for 30-40 minutes or until golden brown and crispy.

Mix berries, banana, half of sugar and lime juice in the bottom of a baking dish (mine is about 22cm round). Sprinkle with white chocolate chips. Place coconut, flour, spices and lime zest in a medium mixing bowl. Rub butter into this mixture until it is coarse and lumpy. Sprinkle crumble over the choc chips. Bake at 160 C for about a hour til crumble is golden brown and fruit is bubbling. If topping is browning too much, cover towards the end of cooking. Serve with cream if desired.

On the stereo:
Ultravox: the Island Years
Posted by Johanna GGG at 14:14