They Who Dare: Masterchef and Ricki’s Tagine 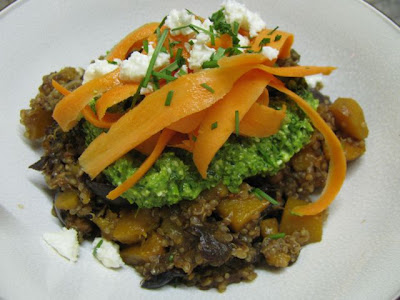 A few weeks ago I had a dream of a reality cooking television show. The décor was a student share house and the judges were prevaricating proctors. It was all about students learning to cook. When I woke up I wished I could remember more details because I thought I could make my fortune with the idea.

Australian readers might recognise this dream as one of the side effects of watching too much Masterchef Australia. I don’t like reality television but this show which combines 'reality' with cooking, has got me hooked. I haven’t watched every episode but as the final week rolls around I am curious to find out who wins.

I love watching others cooking so couldn’t resist this show but, as well as being fascinating, it also has many frustrations. For a start, what does it say about our world when the judges are three men there for their skills (although some might argue that Matt Preston is there for his cravats) and the compere is a glamour girl who seems just there for her looks because she says very little of interest.

I get annoyed at the dramatic pauses by the judges and, in particular, the ‘sudden death’ tastings. In these tastings, two contestants are given a dish such as moussaka or sri lankan curry and one by one they identify ingredients in the dish. It is a tortuous piece of showmanship but not a learning experience. When they get it wrong, they just are told that is the end of their journey with Masterchef. There is too much luck and not enough nurturing of skills on camera, whatever happens behind the scenes. Although there is a lot of encouragement from the judges along the way.

Let’s be honest. It isn’t really about cooking. The show is more about entertainment than education, about creating celebrities as much as chefs, and about showing off rather than showing how. 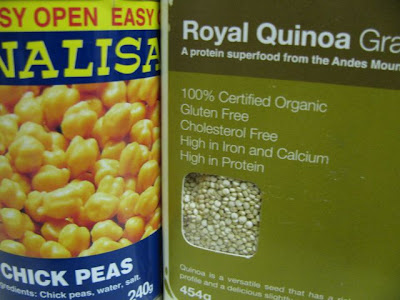 The highlights of the show are the classes on Fridays. I loved last week’s Chocolate Cigars with Sabayon. But even though these are interesting, I often find the judges are smug about how much they excel at what the contestants didn’t do so well. I was really annoyed at one demonstration of a dish a contestant had messed up which was concluded with a simple ‘you’ll never make a bad version of this again’ rather than the exhortation to go away and practice, practice, practice.

For me, one of the most tempting and innovative dishes on the show, Poh’s Deep Fried Meringue filled with Chocolate, Chestnut and Orange, was all the more impressive because she was revisiting a dish she had failed with previously and had practiced it off camera. Of course I am more interested in desserts because so much of the mains are meaty. That said, I do admire Chris for his strong vision of opening a bar and microbrewery with a restaurant attached, even though he loves his meat.

One of the other contestants, Julie, comes across as a real home cook and I am sure the producers love her as the everywoman that viewers identify with. She was so sweet when she was terribly excited about cooking for Australian cookbook guru, Margaret Fulton. But she has also helped to illustrate the point that home cooking is very different to being a chef. Not just in how interesting a meal is but also in how it looks.

For the viewer at home, there is little watching of skills develop, although the master class on Fridays can be a good learning experience. I find it fascinating to see how they plate the dish because presentation is not my strong suite. It is also interesting watching how people develop ideas and there are some interesting ideas to pick up along the way. 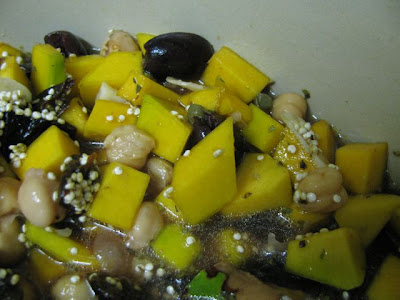 But frankly, I learn so much more from blogs than I could ever expect to from Masterchef. One blogger I always love reading is Ricki of Diet, Dessert and Dogs because I love the way she develops recipes for the food she wants to eat using the food she is able to eat. A case in point is her Tagine with Chickpeas, Olives and Prunes. It began with a yen for Chicken Marbella from the Silver Palate Cookbook, which she had enjoyed years before but she wanted it without the chicken. Adding quinoa and chickpeas was a stroke of genius.

I’ve had my eye on this tagine for some time but last week suddenly the pieces fell into place like a jigsaw that has been waiting to be put together. I had just bought some quinoa and realised I had olives that I had never used for the dish they were bought for, prunes lurking at the bottom of the fruit bowl, capers in the fridge that needed to be used, white wine I bought for risotto that E said tasted like Bulgarian paintstripper and home made stock in the freezer. It was all there. I just needed a side dish. In the fridge were some spinach, feta and carrot. I decided to make a green puree inspired by previous dips. The carrots would be ribbons of colour on top.

The tagine seemed very strong in flavour. Before I went vegetarian, I much preferred a stew with lots of vegetables rather than meat and that is still true of my taste. So I toned down a few of the flavours – capers, oregano and sugar. I also had pumpkin in the fridge but decided I needed more and stopped at the shops on the way home from eating indulgent cake with Yavanna at the Vegie Bar. 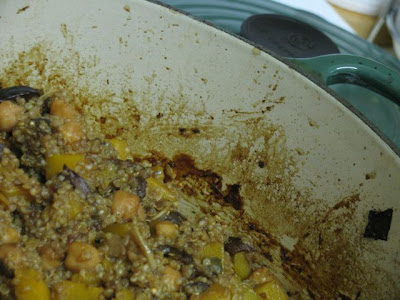 The tagine was easy to cook. It was just a matter of throwing everything in the pot and bunging it in the oven. It reminded me a little of Kathryn’s Greek ‘Chicken’ Casserole. In typical slapdash style, I didn’t read the recipe and just saw that Ricki said to put it in the oven for 40 minutes, failing to see that after checking and adding water if necessary, it had to be returned to the oven. So I was a little impatient with how long it took until I re-read the recipe.

The tagine tasted wonderful with the sharp almost grassy green puree and the fresh carrot ribbons. I loved the chewy quinoa and soft chickpeas. The pumpkin added flavour and moistness. There were so many flavours that it was good to have some simplicity in the puree and ribbons. The tagine was more salty and slightly bitter than it was sweet. In fact the prunes weren’t as prominent as I expected and the olives were less prominent than I expected. But when I asked E if I should make it sweeter like Ricki’s, he said no. I think the tagine would be too intense for me without some sort of side dish but with the puree and ribbons it was excellent.

I was also pleased with the presentation. ‘I’m just plating up the meal,’ I said to Ewan, showing the indeed I have watched too much Masterchef. He said he would be judge. He has also watched too much, but I am praying he doesn’t start to wear cravats like Matt Preston.

Finally, it seemed fitting that the meal had many Mediterranean flavours because that evening we sat down to watch 1950s war movie, They Who Dare, which was set on the Greek island of Rhodes. After practicing sleeping through the noisy music at the Vegie Bar that afternoon, Sylvia soundly slept through it, even when all the bombs exploded. Dinner and drama! Sounds very like Masterchef!

Preheat oven to 175 C or 325 F. Grease a large casserole dish or tagine. Place all Tagine ingredients in the dish and cover. Ricki baked hers for 1 hour and 10 minutes at 175 C, checking every 15-20 minutes after about 40 minutes, and adding ½ cup of water if it was drying out. I baked mine for 1 hour and 25 minutes with half of this time at175 C and half the time at 220 C (I turned the oven up out of impatience).

While the tagine is cooking, place al the green puree ingredients in the food processor and blitz till you have a lovely vivid green puree. (You can also prepare the carrot ribbons – I made mine with a vegetable peeler.)

Once tagine is cooked, place a couple of serving spoons of the tagine on a place, then a couple of dessertspoonfuls of green puree on top. Arrange carrot ribbons on the puree, squeeze some lemon juice over and sprinkle with fetta and chives.

On the Stereo:
The hall of the mountain grill: Hawkwind
Posted by Johanna GGG at 22:54