A Tale of Carrot and Feta Dip 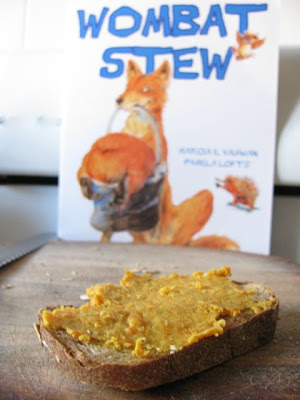 Once upon a time I worked washing bottles in a scientific laboratory (soaked in soapy water, 15 rinses under tap water and 4 under distilled water, baked in a hot oven). I got paid to get up early and wash dishes. But today I did it for love (rinsed once in soapy water) while reciting Spike Milligan silly verse, On the Ning Nang Nong to Sylvia in the rocker beside me while Zinc miaowed at the door and the Reindeer Selection played on the stereo. How times change.

I rarely do the dishes early in the day, or any time of day but the head dishwasher, E, is still poorly. I had thought it was a man-cold but he spent yesterday in bed and never once turned on his computer or picked up a guitar. Now that is a serious cold! (Don’t worry the doctor has ruled out swine flu, which is just as well given that The Australian newspaper has declared Melbourne the swine flu capital of the world!) Meanwhile I have had a pressing deadline with a work project that never seems to end. So the house has been a bit more chaotic than usual.

But at the end of the dishes when I put Sylvia down to sleep, I was able to enjoy some carrot and feta dip on Andre’s Honey Wholewheat Sourdough Bread for breakfast. I have been in need of a good healthy dip but this one appeared on my bread through serendipity. So while I eat my breakfast I thought I would share the tale of the dip. 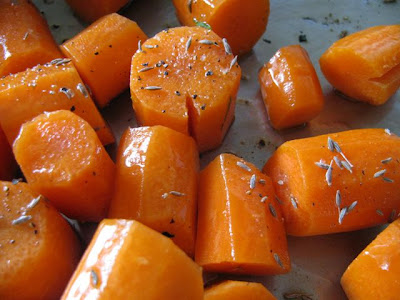 It started when I was skimming the search terms on my stats and saw someone looking for a recipe for a sweet potato and feta risotto. While I don’t have such a recipe on my blog, I thought it might be about time I did. (I haven't made the risotto yet but I am planning to.) So feta went on the shopping list.

Then I saw that Lysy had made a carrot and basil soup with roasted carrots. This seemed an exceedingly wise way to get the best flavour out of carrots and would be perfect paired with some of the feta I was buying for the risotto. Mmmm Carrot and Feta Soup. Righto, in they go (as the Dingo says in Wombat Stew)!

Then I thought that I might add some walnuts to the risotto because they went so well in my beetroot risotto. I heard someone recently saying that they always had walnuts in the pantry and it occurred to me that this is a nut I just don’t eat enough. The walnut takes me back to my childhood when I often encountered it in cakes or ate it crushed with vegemite in a sandwich. Fresh local walnuts in their shells are in the shops right now and I just need a nutcracker so I can buy some. Alternatively, I have considered using a heavy heel of a shoe as we used to do sometimes when I was young. Mmmm. Carrot, Walnuts and Feta Soup. Righto, in they go! 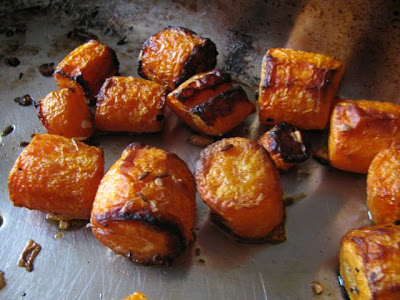 Then Cindy and Michael of Where’s the Beef have clocked up 800 inspiring posts and asked for ideas for warming winter recipes for winter, with the winner getting a giveaway. The winning recipe was Jo‘s Roasted Cumin and Pumpkin Soup. The idea of roasting cumin with the carrots appealed. Mmmm. Carrot, Walnut and Feta Soup with roasted cumin. Righto, in they go!

Then it occurred to me that it might be even better if I used chickpeas rather than walnuts because I decided I needed the walnuts for baking and pesto and other yummy recipes. Chickpeas are lower in fat and go so well with carrots in falafels. Mmmm. Carrot, Chickpea and Feta Soup. Righto, in they go!

Then I remembered sprinkling dukkah on carrots after being inspired by a meal at Rumi. I still have the jar of dukkah and always need excuses to use it. This seemed an excellent opportunity. The middle eastern spice mixture would go well with the carrots and feta. It would also make a lovely garnish for the soup when I photographed it for my blog. Mmmm. Carrot, Chickpea and Feta Soup with Dukkah. Righto, in they go! 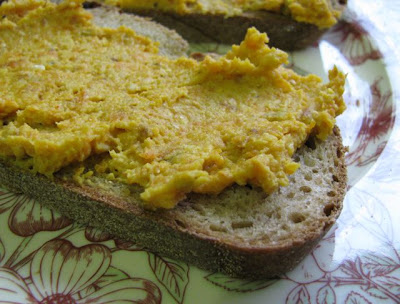 Then yesterday I was all prepared to make my soup for lunch. But I decided to take Sylvia to the library in the morning for Rhyme Time.Afterwards I bought a few bits and pieces including a loaf of lovely sourdough from Andres to go with my soup. Alas, I was tempted by a cauliflower cheese pastie and was hungry enough by the time I got home to eat it for lunch. It wasn’t until later in the day that I started roasting the carrots in a wave of procrastination. By then, lunch had well and truly passed. So had my urge for soup. I decided to make a dip. Mmmm Carrot, Chickpea and Feta Dip! Fickle? Moi? The dip was a huge success. The carrots were roasted until they were a soft charred shadow of their former selves. The roasting cumin smelled glorious. The dip was pleasingly orange and full of texture. The spice was a little warmer than I would prefer (maybe a bit less cayenne pepper next time) but not overwhelming. It spread nicely on a slice of bread and was great with a vegie burger and some roasted onion, mushroom and kale (which got a little charred while being abandoned in favour of feeding Sylvia) in a sandwich. So I will leave you with some doggerel about my dip, with apologies to Wombat Stew (just to prove I have been awake too early, too long and should be in bed).

Trim, peel and roughly chopc carrots. Toss carrots with oil, seasoning and cumin seeds in a roasting dish. Roast for 1 hour at 220 C, giving the dish a good shake about every 20 minutes. Add chopped garlic and roast an additional 15 minutes. Cool slightly. Blend all ingredients in food processor til mostly smooth with just a little texture. Eat with Andres wholewheat honey sourdough loaf.

On the stereo:
Son of Evil Reindeer: the Reindeer Selection
Posted by Johanna GGG at 10:19