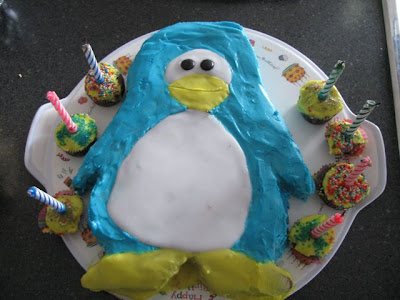 It’s been a while since I made a fun novelty cake. A year, in fact, because the last year has been so draining. But as Maddy’s birthday came around again, I offered to make a cake. We decided to make a Club Penguin cake because this is one of her favourite websites at the moment. I was pleased with the end result because it was created from looking at pictures on the web rather than following any guidelines, so I thought I would share my story of making the cake for anyone looking for tips.

It took a little organisation to get down to Geelong early with Sylvia in tow and decorate the cake – ably assisted by Maddy and Grace – before the lunchtime party. E was feeling poorly and stayed at home in bed. So my mum was invaluable in looking after Sylvia and walking her in the pram so I could concentrate on the cake. She even finished off the cake while I fed Sylvia. 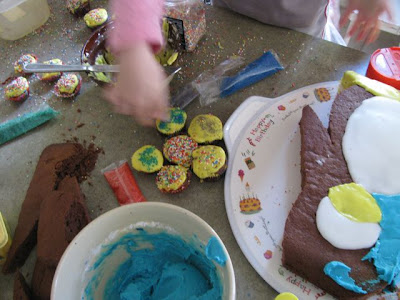 I enjoy having the kids helping me because it gives them extra pride in the cake but this was not a cake they could help a lot with because it needed fiddly work filling icing in small areas. But Maddy and Grace helped with brushing crumbs, mixing icing and decorating the little cakes that we used for the candles. It was a mess but I was amused by such youthful exuberance. 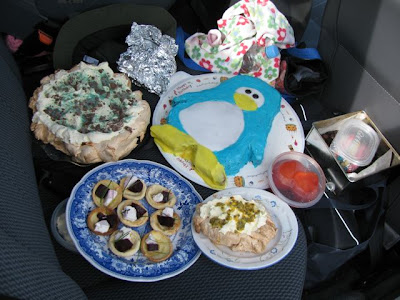 Even with Sylvia being so well-behaved (until we left my mum’s place) my mum and I were a little late for the party. (My dad had already taken the party girl home.) I couldn’t resist taking a photo of the cake and pavlova and tarts in the back seat of the car when I we went from my mum’s to Susie’s place. I was quite worried what my car might look like if I had to brake suddenly. Fortunately we got there with all intact. 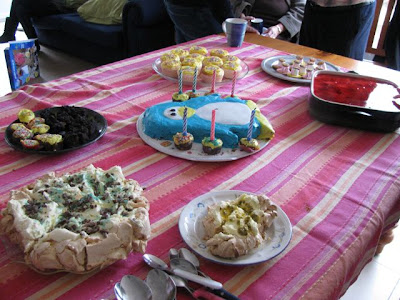 As usual there was heaps of good food. I also took along the gluten free brownies. Susie made a plateful of cute tea cups out of tic toc biscuit saucers topped by a marshmallow, a freckle and half a lifesaver for a handle (see the picture on my GF brownies post). My mum made some beetroot and goats cheese tarts, a delicious quince cake and a pav as well as the family's latest favourite GF cupcakes. (I even had to take one home for E who loves them.) Susie’s mother-in-law made her trademark trifle.

The party was lots of fun. Maddy loved her cake. This was the party for family so Maddy still had lots of fun and food to look forward to with her friends at her bowling party during the week. My sister Fran amused us when she arrived with her partner John and his parents because they had run into them on the drive down (not literally). My little nieces Grace and Ella had Arthur bear with them who was visiting from kindergarten. There were quite a few little kids about including my brother’s baby Cooper crawling about and my oldest niece Quin who was enjoying playing with the Hannah Montana wig. 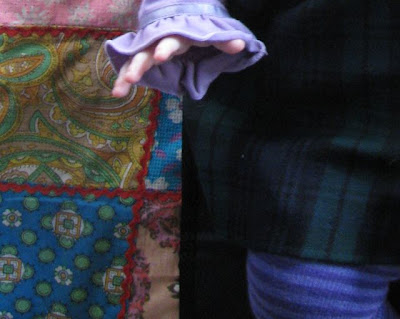 It was Sylvia’s first party. She had a lovely time in a black watch tartan dress and purple stripey tights. I couldn’t resist giving you a little peek! When we arrived she slept for a while in the midst of the bustle and then woke and got lots of cuddles and photos. But this is a food blog, so enough about my wee girl. Here is the low down on the cake:

How to make the Club Penguin birthday cake

As usual, I made the cake the day before. This is easier for handling the cake as well as meaning I don’t have to rush so much on the day. The cake I made was the same as the one I used for my Green Gourmet Giraffe Cake. I made it all chocolate so I used 3 tbsp of cocoa and omitted the lime flavourings.

I baked one lamington tray (28 x 18cm or 11 x 7 inch) cake with wheat flour and set aside about a third of the butter/sugar/egg mixture to add gluten free flour instead of wheat flour. The gluten free mixture went into the mini muffin pans and made about 20. This was very useful in having 7 cupcakes for candles and for distracting the girls with decorating these while I concentrated on icing the penguin. We also had some gluten free cakes for Grace to eat while Maddy was sampling the trimmings of the large. She loved them despite me forgetting to add baking powder so they weren’t well risen. 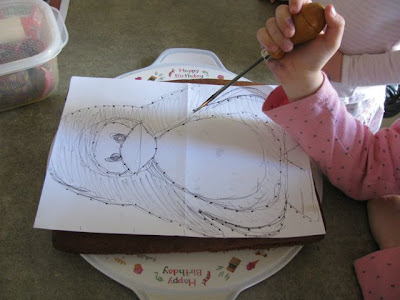 The first task was to draw the penguin picture on an A4 sheet of paper – this is about the size of the lamington tray cake. I then searched for a skewer to punch the pattern onto the cake. My mum didn’t have any! We looked for something sharp and thin. She finally found the tool that you can see Maddy holding above the picture. I pricked the outlines of the picture onto the cake and then took the paper off. It looked a little like a join the dots picture. 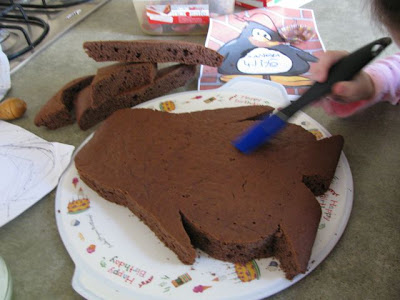 Place your cake on the plate you will use. My mum had a lovely happy birthday plate we were able to use. But I have previously used a flat baking tray – if it is coloured from frequent use, you can cover it with foil. Once, the cake was in place, I used a sharp knife to trim the edges to get the penguin shape. Then we used a dry pastry brush to clear away as many crumbs as possible – so they don’t get mixed up in the icing (frosting) mixture. 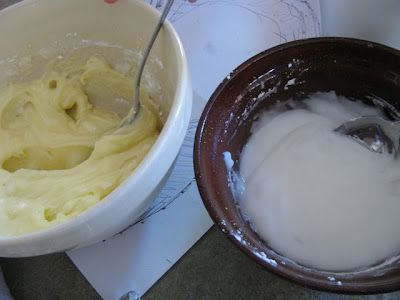 Next we mixed the icing. I just mix icing sugar (confectioners sugar), butter and water but we found that this mixture was too yellow for the white part of the picture (see the comparison in the photo) so I had to mix just icing sugar and water for this one. I made a fairly thick paste so it was a little difficult to spread. But I found that it kept its shape this way and could be smoothed with a knife dipped in hot water. For yellow and blue icing I just used a few drops of liquid colouring. The yellow icing for the feet was a little runny and kept pooling on the plate. 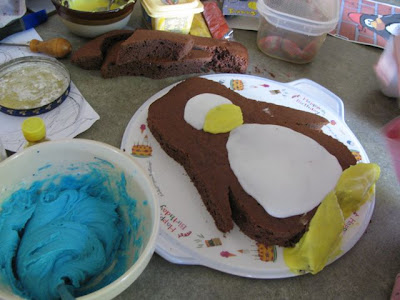 I used the pricks over the cake to get the outlines for the different colours. I spread on the white, then yellow and then blue colours. Once the icing was on, I used the knife in hot water to smooth it all. The most challenging bit was around the edges of the flippers. My mum did some smoothing and said she found it easier to use a wet finger to spread some of the more difficult areas rather than the knife.

Then it was time for the final touches. I used two dark smarties for the eyes. Any round dark lollies or candy would probably do. I also used a sharp clean knife to make the line across the mouth on the yellow beak. Once we got to my sister’s place we put the little cakes around and stuck the candles in them.

On the stereo:
Pink (can’t remember the name of her album that the girls were playing but there was a fight over it)
Posted by Johanna GGG at 10:16