Soup and Cake for Lunch 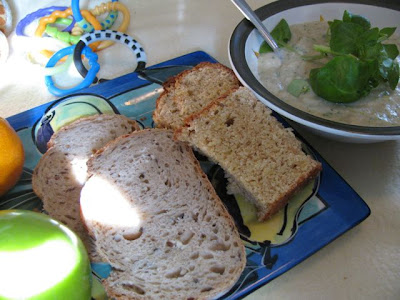 Yesterday I was wondering what Jarvis Cocker thought about the death of Michael Jackson. Sylvia and I had a relaxing day after a busy week. We had done a little socialising, been into my office, had her 4 month check and immunisations. But yesterday we spent most of the day at home. It was a day to hang the washing on the line, make soup and listen to talkback on the radio.

Everyone was talking about the death of Michael Jackson as though it was the most important thing to happen last week. Even more important than UteGate, our weird and wonderful Australian political scandal where the leaders of the government and opposition spent a lot of hot air telling each other to resign over cronyism and a faked email.

While I am sad when any human dies, I didn’t think the death of Michael Jackson was as momentous as some of the media commentators would have us believe. I was never a fan. Of course I tried to do the moonwalk but never even bothered to perfect it. The song I remember most fondly is Ben, a sweet song about a rat. I think I liked it particularly because it reminds me of going to see sentimental movies such as Storm Boy and Benji on school excursions. I think that Ben was also on the album my dad bought, thinking it was a woman singing! 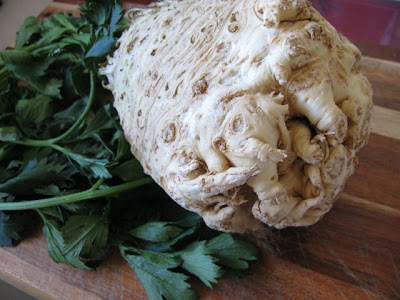 E mentioned that no one does covers of Michael Jackson songs. No covers but I can think of a spoof that amused me when it was a hit. Weird Al Yankovic’s single Eat it was number 1 in Australia. I loved the line “Have some more yogurt, have some more spam / It doesn't matter if it's fresh or canned / Just eat it”. One of the high profile Michael Jackson stories that comes to mind for me is when Jarvis Cocker wiggled his bottom at Jacko and ended up in jail overnight. So you see why I was wondering about what Jarvis thinks now!

But when it comes to posterity, I feel that the Farrah Fawcett haircut has every bit as much claim to history as the moonwalk. It seemed sad that no one was talking about her. When I was a child Farrah Fawcett was the picture of glamour for young girls like me. So I was more saddened by her death on the same day as Jacko.

These were some of my thoughts as I listened to the radio while I ate lunch. Sylvia was kicking on the rug with her toys and I sat beside her to eat. While many days I have a dull lunch of peanut butter sandwiches, I was pleased with my efforts yesterday. I made soup and had home made cake and fruit after.

The soup was an easy one, inspired by my recent onion soup and a yen to try cooking with that beastly vegetable, celeriac. It is one of those unusual vegetables that fascinates me but I am never sure what to do with it. I had found its ugly face impossible to resist in the supermarket so I had to use it. 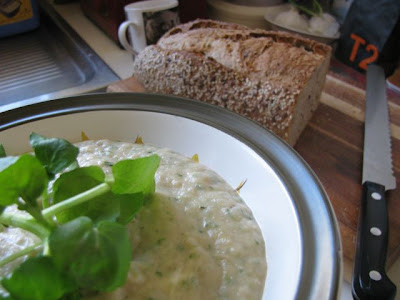 I roasted the vegetables and pureed them with the last of my home made stock from the freezer. I added some yoghurt but next time I might try milk or cream because the sourness of yoghurt was a little strong for the subtle root flavours, although I did like the creaminess. The celeriac had a pleasant nutty mild celery flavour. It was an easy soup to make while looking after Sylvia because it required very little attention (unlike my wee girl).

After the soup I had a slice or two of Cheese and Apple Cake. I had seen it on Not Quite Nigella. It is worth reading Lorraine’s post for the amusing reflections on historic recipes. She found this recipe in a National Trust cookbook. Lorraine used pears but I fancied apples. I omitted the almonds but have put walnuts in the recipe as I think I might use those next time. 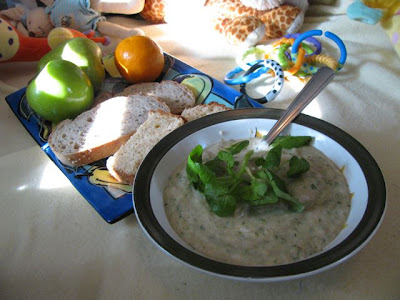 The idea of cheese in a sweet cake intrigued me. But despite the strong smell of cheese from the cake box each time I open it, the cake does not taste as strongly of the vintage cheddar cheese as I had hoped. Nor could I taste the apple much either. In fact the cake was mostly buttery and sweet. Just E’s type of cake but not so much mine. I’d prefer the apple and cheese without the sugar. Although I did like the occasional chewy bits of cheese. It is just the right sort of cake to have for an afternoon tea with a cuppa. Or to sandwich between some soup and an apple for lunch.

Place celeriac, potato, and onion in roasting dish. Drizzle with olive oil and sprinkle some seasoning over it. Roast at 220 for about an hour or til soft. Trasnfer to large saucepan. Add stock, water and garlic. Simmer for 15-20 minutes. Remove from the heat. Add watercress and stir a couple of minutes till wilted. Puree with hand held blender. Stir in yoghurt, cream or milk.

Cream butter and sugar. Add eggs one at a time. Grate apples over bowl so the juice goes in as well as the flesh. Discard the cores. Stir in cheese and yoghurt and walnuts if using. Fold in flours, bicarb soda and baking powder till just combined.

Spoon batter into the prepared tin. Bake for about 1 hour until a skewer inserted comes out cleanly. Cool in the tin for 10 minutes and then turn out onto a wire rack to cool.

On the stereo:
New Wave playlist – various artists
Posted by Johanna GGG at 22:33