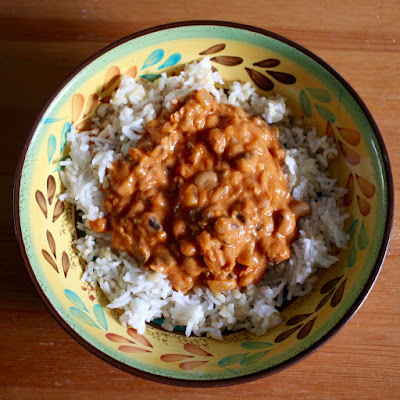 I am following up my What does home mean to you? meme with a post on how refugees have enriched our culinary culture.

Australia has a dark history when it comes to non-Anglo immigrants. There are many shameful actions, from the racist attitude towards the Chinese on the goldfields in the 1950s, to the White Australia policy (1901-1973) to the recent Australian tough stance on border protection by the Howard government which was justified by claiming the refugees were throwing their children overboard from their boat. Yet we have benefited from the rich traditions brought to our country by migrants.

We talk about waves of migration in Australian history. There are also waves of refugees. The first wave might be said to be the political refugees who arrived in Australia after participation in Chartism in England and the Irish rebellion. However most refugees have arrived in the latter half of the 20th century. 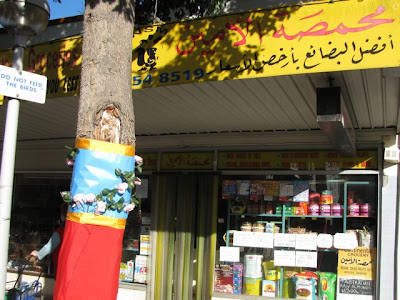 When we look around the eat streets of Melbourne, we can see evidence of the waves of refugees. Ackland Street in St Kilda has the tempting continental cake stalls and cafes of European refugees after World War II. Victoria Street in Richmond has the fascinating Asian grocery stores and restaurants that were established by the "boat people" in the 1970s following the Vietnamese War. Since the 1980s, Sydney Road in Brunswick has boasted many fine Middle Eastern bakeries and cafes run by refugees from countries such as Iraq and Afghanistan. The newest wave of refugees are from Africa, especially Sudan, over the past decade. Some great African cuisine can be found in the Ethiopian restaurants of Footscray.

(I took the above photo today of a local Middle Eastern grocery in our part of Sydney Road. I was amazed to notice the work someone had done decorating the trees in the mall and couldn't resist sharing a photo or two of them with you. I am not sure if they have anything to do with refugees but they do illustrate the flowering of the suburb! Ha ha!) 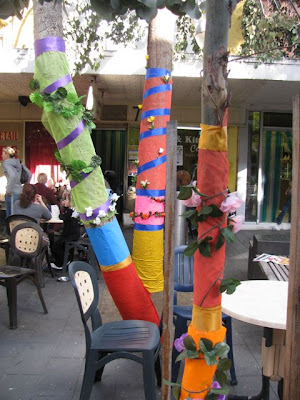 Some of the influences of refugee cuisines can be seen in the food I share on this blog. Today I want to share a dish that indirectly benefited from refugees. It comes from my mum and her volunteer work. Every week she visits me and then goes on to help cook for refugee groups in the next suburb to me. It is great to sit and chat about the different meals that she makes. 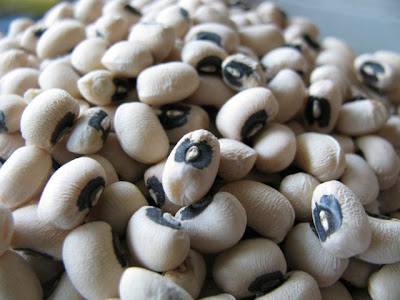 One week recently, we were talking about ideas for cooking for big groups of people. I suggested some bean dishes – many vegetarians attend these meals. I have a favourite creamy tomato and black-eyed bean (black eyed pea) dish from Alison Holst called simply African beans. I used to make it a lot when living in student households and had decided to make it again. I am never very organised at soaking beans so I love the black eyed beans in this recipe because they don’t need soaking. Mum looked at the recipe and decided it was a good easy one to try. 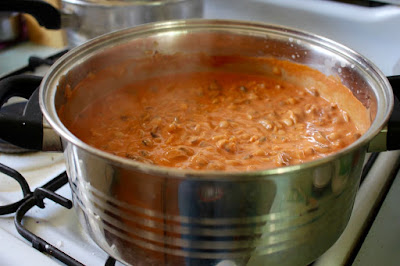 When I made it I tried to follow the recipe but discovered I only had a small tin of lite coconut milk rather than coconut cream. So I added more tomato paste. It wasn’t a success because the tomato paste predominated more than it should have. It was edible but not great. I talked to my mum the next day and she said how wonderful her African beans were. She has used passata (sieved tomato puree). It seemed much preferable to tomato paste. 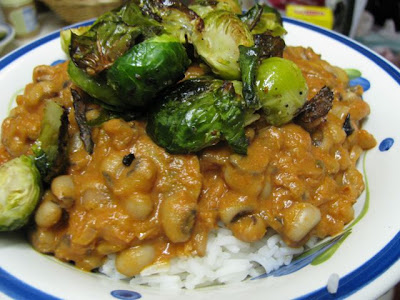 So I decided to try it again. I strayed quite a bit from the recipe. Passata replaced the tomato paste. I used more beans and coconut cream and I added mushrooms. Both E and I loved it. It is creamy, easy and delicious. Fantastic for a vegan or dairy-free diet. We ate it for a few nights in a row. The best way to serve it was with brown rice and roasted Brussels sprouts. Yet another great reason to welcome refugees into our community!

Place beans in a large stock pot with lots of water. Bring to the boil and then simmer for about 40 minutes or till or til beans are nice and soft. Drain.

Meanwhile, heat oil in a large saucepan and fry onions over low heat for about 10 minutes till golden brown. Add mushrooms and garlic. Fry another 5 minutes. Add remaining ingredients and bring to the boil. Add cooked beans and heat. Serve with rice and green vegetables.

Update 2016: Made this again and have updated a couple of photos.  We served it with baby spinach.  I fried my onions for 10 minutes over low heat and they weren't cooked enough so next time I might do it at medium heat. I used an extra tsp of salt (I used salt flakes).