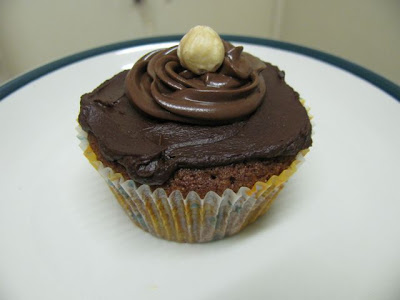 When Sylvia is unsettled in the evening, I often ask E if there is any chance he will be strumming a bit of guitar. Or some days he just picks up the guitar and takes it in to the bed beside the cot. The sound of the guitar will relax her and often put her to sleep, though some days she just squeals along in delight.

It was thanks to E and his guitar that I managed to ice these cupcakes. I had told E I would bake something for him and decided it was time to trial an icing gun I had received for my birthday at the start of the year. It has taken me a while because I have needed a decent stretch of time to work it out and that doesn’t happen a lot these days. 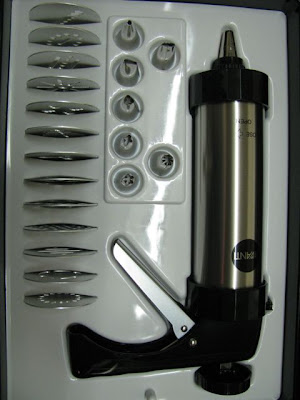 The inspiring moment came when I found a recipe for cupcakes which were decorated with nutella. As a child, I remember buying little sachets of the chocolate hazelnut spread to eat with a little plastic paddle. Even now I quite enjoy eating it straight from the spoon. (I have even made a vegan notella sauce if you want a dairy-free version.) So I knew it had to be good in the cupcakes. It seemed a lot easier to pipe nutella because I didn’t have to mix an icing to the right consistency. But I decided that the nutella wasn’t enough for the frosting. So I made a chocolate frosting. It was a bit dry but worked with the gooey nutella. 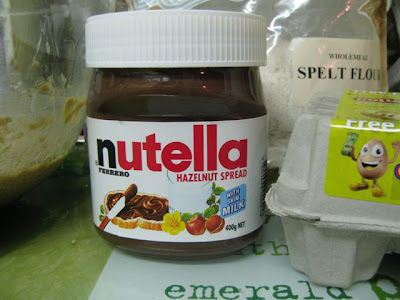 Making the cupcakes were fairly straightforward – I made some changes, including accidentally using wholemeal flour instead of white. Finding the time to rev up the icing gun was more tricky. This is where the guitar came in. E strummed away to soothe Sylvia while I piped out the inaugural squiggles. 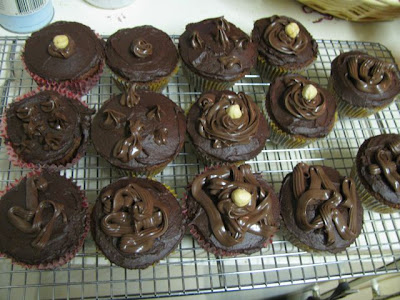 Squiggles is as good a term as any to describe what I managed to produce. It isn’t as easy as it looks. I felt like a cartoon character with a runaway horse. Whoa boy! You will see the crazy piping in the photo of all my cupcakes. By the last few, I had discovered I needed to lower my expectations. A small but elegant swirl of nutella topped by a hazelnut made me feel quite proud of my creation. Not bad for a girl who was constantly told at school that my assignment was good but needed more work on presentation. Stay tuned for more passionate piping!

The cupcakes were fantastic fresh and warm from the oven but the next day were a little on the dry side. It might be the wholemeal flour but they needed a bit more moisture. Maybe some yoghurt or sour cream rather than milk might help. But with the frosting, they were lovely. In fact E said if he had his druthers he would just eat the frosting off the top and leave the cake. Grrr! My dad came over yesterday so we were able to offer a cupcake with his cuppa. When he left I gave him a containers of my mum's (which came with dahl in it) which was loaded up with cupcakes to take to a football evening at my brother's place on the way home. 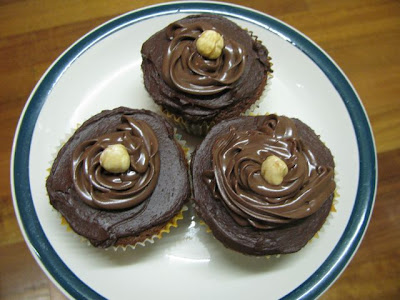 Cream butter and sugar and then add eggs one at a time. Beat in nutella and then flours, baking powder and milk in two batches. Spoon into muffin tin lined with paper muffin cups. Bake at 190 C for 20-25 minutes. They are cooked when a skewer inserted comes out clean. Cool on a wire rack.

On the Stereo:
Dongs of Sevotion: Smog
Posted by Johanna GGG at 18:15