The Amazing Chocolate Cake in a Mug 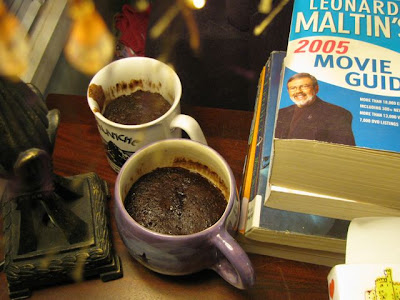 A few nights back E needed chocolate and I needed little encouragement to try a new chocolate cake recipe. We both had boring snoring work to do on our laptops and I had a mind to avoid mine more than he did. Besides Sylvia wouldn’t sleep so I had her with me in her harness.

E had already decided he would have a hot chocolate but there was no milk. Then he spied the nutella jar but it was empty. So I thought I would surprise him. There are very few cakes that I would attempt to make while carrying Sylvia about. But a 5 minute cake in a mug was possible. 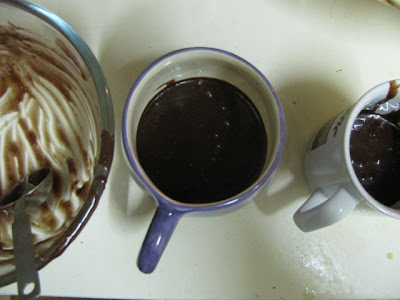 Yes, you heard right! I thought it was a typo when I saw Lorraine of Not Quite Nigella (and yes she of the Ultimate Chocolate Cake Event) posting a Chocolate Mug Cake. Surely she meant to type Chocolate Mud Cake, I thought! I was wrong. She mixed and cooked the cake in the mug in the microwave and ate it with a spoon. Simplicity itself.

When I first tried it, I used yoghurt and decided to make a version with no baking powder. (See the photo below.) Note it came away from the side of the cup when I cooked it 2 minutes but did not in the other photos when I cooked it 1½ minutes. Lorraine’s photo of the cake with baking powder looked like it had exploded in the microwave. But it was a little dense and the yoghurt flavour wasn’t quite right. 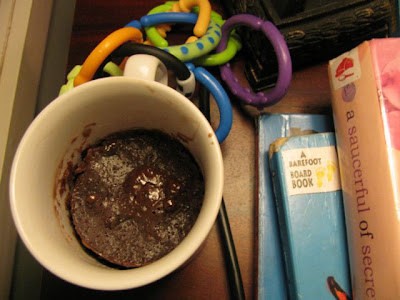 Tonight I made it again with milk, less sugar, less cocoa and self raising flour (if you don’t have self-raising flour you just need about half a teaspoon of baking powder). It was excellent. Light, fluffy, chocolatey and even a little undercooked on the bottom, which didn’t matter in a warm cake.

We ate it with spoons with Bach playing in the background. As an aside, one of E’s favourite DVD series at the moment is Classical Destinations. It is a travel show which visits sites with links to famous composers. This week we watched the one about Bach and he raced straight out to buy some of the works featured on the show. As an aside to the aside, my grandfather told us that we are related to Bach so I feel a particular affinity to his music.

Enough asides. Back to the cake. E was most impressed to have a cake appear beside him on the desk. He didn’t finish it the first time when it was a little heavy. But tonight, when I hoped I might have to help him, he ate it all. 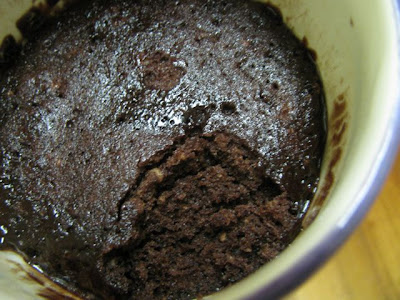 I am sure I will be making it again. In fact, this is a dangerous discovery. This must be the ultimate quick-fix chocolate cake! Perfect for cravings, heartbreak and spontaneous dinner parties. Bad for those trying to follow a healthy diet. You don’t even expend much energy doing dishes. This warm chocolate cake is all too easy and tempting. The only saving grace is that it makes such fortunately small portions. Go on. Try it. I dare you to resist!

Chocolate Mug Cake
(adapted from Not Quite Nigella)
Makes 2

Combine all ingredients in a small bowl. Lorraine just mixed it in the two mugs to avoid any more dishes than necessary. I used the tablespoon measure to mix which was my contribution towards minimal dishes. Divide batter between two microwave oven proof mugs (no greasing needed). Lorraine put gladwrap (cling film) on hers but I kept forgetting and it cooked ok without it.

Place one cup at a time in the microwave for 1½ to 2 minutes on medium or 50% power. Check after 1 minute and 1½ minutes to see if the cake looks cooked, given that the cake will continue to cook just a little when it comes out.

Cool 5-10 minutes and eat with a spoon. You can serve this with cream or my favourite honey and cinnamon yoghurt but it tastes delicious unadorned.