Bimbos – for the young and old 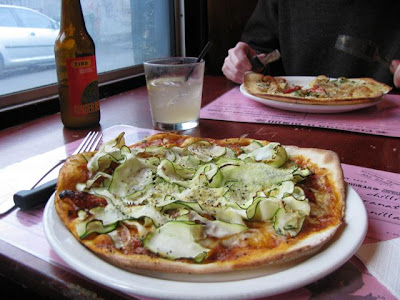 Sylvia started the day with her new book, Foodie Kids Wear Bibs, and a dance to the new Jarvis Cocker album. She then headed out to Brunswick Street to Bimbos. What a hip young thing! There will be no stopping her once she is walking and talking.

Whereas I feel old when I go to Bimbos because it will always be the Punters Club to me. A.K.A. Punners by the regulars. I would go there occasionally in my student days to see a band. It was a dark and grungy pub with a sticky floor in those days. Now it serves modish pizzas and flavoured vodkas. 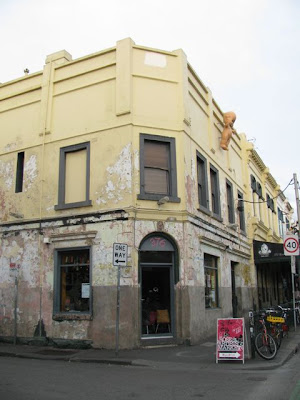 For years I wouldn’t go there because it just seemed blasphemous to rename the Punners with such a derogatory name and I still am not keen on the t-shirs with kewpie dolls in stockings and suspenders (just as I didn’t feel I needed to hear about the tattoos on David Caradine ’s genitals when listening to 3RRR radio en route to Brunny Street). My idea of fun is not the same as the owners!

But I have been won over by the chocolate pizza which I had a few years ago. I went there for dessert one night. My memories are of a gooey decadent pizza and the music getting louder and louder as the night wore on. Since then I have only returned for lunch. But I like the bottles hanging from the windows and the bare wooden look with some dark grungy corners remaining and a rooftop space that is crowded in summer. The laminated tables and kewpie dolls add to a little retro atmosphere. (Can you spot the giant kewpie doll on the building facade?) 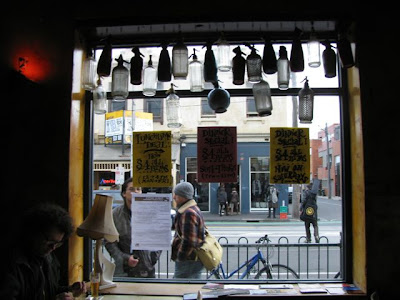 We were there because E has a new guitar and wanted to get it set up by his favourite guitar repairman. Next to us was a family group with grown daughters. The mum wore a purple velvet dress. Outside a couple in skinny jeans walked past a run down old building adorned with graffiti. A brightly coloured VW Beetle drove by. This is trendy Fitzroy but I have been going to Brunswick Street long enough to feel at home, despite all the changes.

And the pizza was very good. Actually E said his Aglio Olio (garlic, chilli, olive oil, parsley, parmesan) was one of the best pizzas he has had in ages. I was most impressed by the flavours when I tasted it. There must have been at least a bulb of sweet pungent roasted garlic on that pizza. I chose the Zucchine (tomato, mozzarella, sun-dried tomatoes and parmesan). It looked so pretty with wafer-thin ribbons of zucchini piled on top and was quite tasty with a generous amount of sauce and mozzarella. The pizza bases are quite thin and mine was a little soggy but nevertheless delicious. The menu had a few interesting vegetarian pizzas with tempting toppings such as halloumi and lemon, taleggio and potato, and pumpkin and soy cheese. 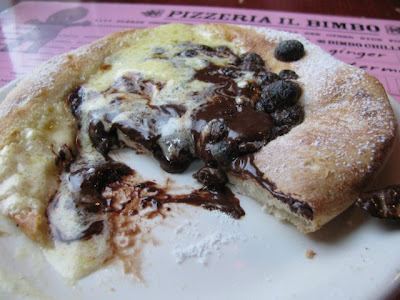 But best of all was the chocolate pizza that we shared at the end of the meal. A much simpler affair than the Mojos dessert pizza. It was a small pizza with Belgium dark chocolate and marscapone. The light pizza base under the melted puddle of creamy chocolate was absolutely delectable. The bill was reasonable and we were able to finish up just in time to leave our one hour parking spot.

On the way home, E dropped me off in Brunswick where my bike was being serviced. I haven’t ridden it for a long time but have been looking forward to flying along the bike tracks on it again. So I set off into a head wind, past the graffiti, past the huge cacti bushes, past the cat on the car bonnet, past the speeding silver train, past the ringing flashing boom gates, past the orange wire lizard on the grey house and home to where E and Sylvia had just arrived 5 minutes earlier. My legs were a little wobbly but I was very glad I had had the chocolate pizza.