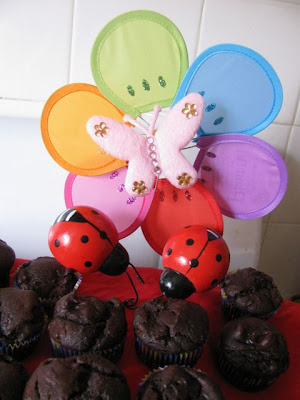 My friend Yarrow came for breakfast this morning. It was one of those lovely casual get-togethers. He lives out of town and was visiting before a day of meetings in Melbourne. I considered planning a nice breakfast but wasn’t sure of his plans or mine. No matter. I had good bread and indulgent cupcakes. 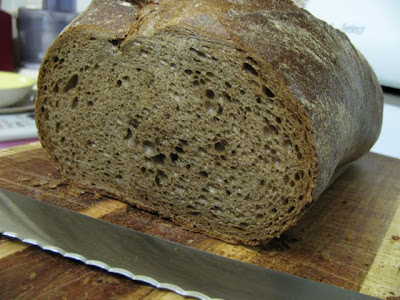 The loaf of dark rye bread was from the O’Hea Street Bakery (203-205 O'Hea Street, Coburg North). Sylvia and I walked there yesterday for the first time. Fittingly, it was Yaz who first recommended the bakery to me last year. The bread is dense and flavoursome with a chewy crust.

I baked the cupcakes last night, despite Sylvia being quite restless. It was a recipe I had been keen to try for sometime because it had avocado replacing eggs and most of the oil. I had first seen avocado in baking on Ricki’s blog when she made Tropical Lemon Coconut Muffins last year. They sounded interesting but I couldn’t go past the Vegetarian Times recipe for ‘rich luscious’ chocolate avocado cupcakes. 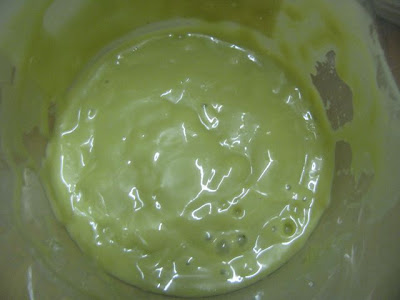 The recipe instructed to puree the avocado and then add the remaining wet ingredients to the blender but in my usual haphazard fashion I pureed everything together with my hand held blender. The resulting avocado goo is a glorious green. The sort of gloopy mess that kids love to play in. It is worth making the muffins just to enjoy this step. Sadly, the colour disappears once the cocoa is added to it. In fact the cupcakes are so dark as to be almost black. This recipe uses a whopping three-quarters of a cup of cocoa – far far more than the 3 dessertspoons of cocoa we would use for our standard chocolate cake when I was young. 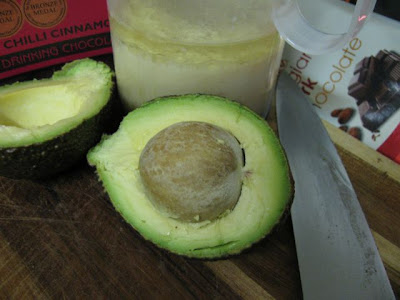 I made a few frugal changes to the recipe. Frugal because I am trying to use up ingredients that otherwise would linger in the pantry. I substituted buckwheat flour for some of the wheat flour because I have decided to use up some of my flours this way. I also have a box of chilli cinnamon chocolate drinking powder that I bought in my trip to the city this week. I made myself a cup of hot chocolate with the powder upon getting home with it and the chilli was hot. So I have decided to use some of it in baking. This was the perfect recipe for it. I used a quarter of a cup of powder and the cupcakes have just a hint of chilli. I wish I knew how much chilli powder to add to get this amount of heat. (I once bought a chocolate chilli muffin in Lygon Street and it was not only too hot for me but even too hot for E!) As maple syrup is expensive and chocolate drinking powder is sweet, I reduced the amount of the former from a cup to three quarters. I also used cow milk rather than soy milk but the original recipe was vegan.

So I now have a very tempting biscuit tin full of dark rich soft cupcakes. You might suspect there is a bit of chilli in it but if you were E you wouldn’t guess there is avocado in it (even when the recipe is clearly displayed on my recipe holder in the kitchen). The VT recipe was for 12 muffins but I think mini-muffins are the way to go with these as they are so intense that a whole muffin might be too much. I also decided not to make the frosting, partly because I didn’t have tofu (which is pureed with maple syrup and melted chocolate to make a rich creamy frosting) and partly because I couldn’t be bothered. I just added some chopped chocolate to the batter instead. 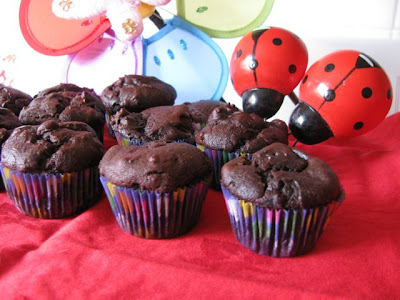 Actually I hadn’t planned to get this posted today but Yaz's visit went quickly as we had lots to discuss as well as needing to spend time playing with Sylvia. After he left with a goodie bag I remembered I hadn’t told him what was in the cupcakes. He loves cooking and will be interested. I thought the easiest way to tell him was to send the recipe in a blog post. It is the least I can do considering that after he left, Sylvia had one of her best daytime sleeps for many days!

I am sending these cupcakes to Madhuram for her Low Fat Eggless Baking Event.

Preheat oven at 180 C. Line mini muffin pans with cupcake papers (or 12 muffin cups). Place dry ingredients and chocolate into a mixing bowl and stir. Blend wet ingredients – I used my hand held blender. Mix wet and dry until just combined. Bake for 20 minutes (or 25 minutes for regular muffins) or until a skewer poked in the middle of a muffin comes out cleanly.

16/7/09 - I've just seen a great idea for avocado buttercream frosting at Joy the Baker. This would be perfect with these cupcakes.

On the stereo:
Deserter’s Songs: Mercury Rev
Posted by Johanna GGG at 18:08