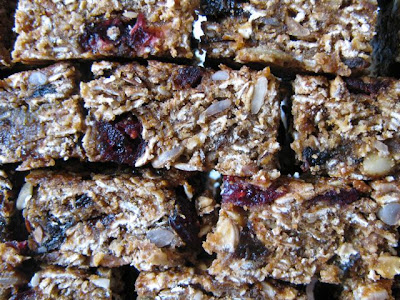 I have been seeking a muesli slice to love and it seems my search is now over. I saw celine’s pumpkin molasses slice a while back and was reminded of it by Vegetation. When my mum gave me a large wedge of pumpkin, I decided it was time to try it. I made a few small changes. It was good but not great. It certainly did not look dark and devlish like Celine’s photo (see the photo below and compare it to the final version of my slice).

I loved the soft orange sweetness of pumpkin in the slice but I needed more fruit and more texture. Sophie, who has recently gave lots of ideas on eating oats, had alerted me to rolled oats being lower GI than oatmeal, so I it seemed sensible to exchange some rolled oats for a lot of the oatmeal. Unfortunately when I checked my dried fruit supplies a few had gone bad and needed to go to the great pantry in the sky. Oats, nuts and dried fruit! It sounded a little like muesli (a.k.a. granola) to me. So I added some seeds and coconut, which I also love in muesli.

In the past I have gone through phases of buying muesli bars but I would love to make my own. However, I have had problems finding a recipe to inspire me. Many seem dry, flapjacks are not quite my thing and I am a little suspicious about recipes which have a cup of muesli because not all mueslis are equal. I love my microwave muesli recipe but don’t make it that often. So I wanted a recipe which uses the components of muesli rather than a pre-mix. 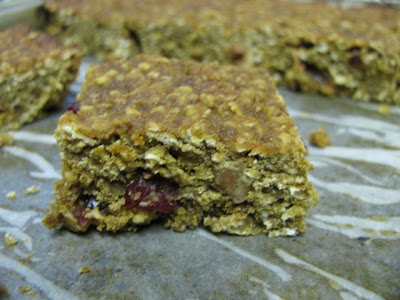 Pumpkin, which is one of my favourite vegetables, is the magic ingredient I had been seeking. It replaces the eggs and most of the oil. I also love that this slice has the dark deep flavours of treacle or molasses. The only other sweetner is honey, which I have been loving lately. The slice is as good as my other favourite healthy slices, Fig and Nut Slice and Fruit Nut and Tahini Slice, but easier.

This is a slice to suit many diets. It can be easily dairy-free, nut-free, vegan, wheat-free. The first time I baked it, I used ½ a cup of wholemeal flour and ½ a cup of buckwheat flour but because my buckwheat flour was claimed by the weevils I used all wholemeal spelt flour on my second attempt. So it was wheat free albeit not gluten free. To make it vegan you could substitute maple syrup or sugar for honey Celine used sucanat, a non-refined cane sugar that I have never encountered but read about on many blogs. If you want a nut-free version, I don’t think the nuts would be missed among all the seeds and fruit. In fact you could use any combination of nuts, fruit and seeds because it is one of those free and easy slices. 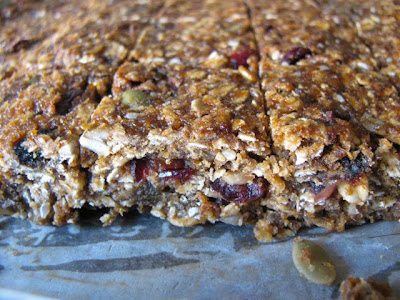 The slice is a deep golden-orange colour with lots of interesting seedy textures and soft sweet fruit. I have been needing a healthy, satisfying, easy slice to have around the kitchen while I spend a lot of time at home with Sylvia. I predict that I will be found baking this superb slice often and enjoying it with a cuppa tea.

Pumpkin Muesli Slice
(Adapted from Have Cake Will Travel)

Peel and trim pumpkin (I used Jap but Queensland Blue or Butternut pumpkin would be fine). Place in a small plastic tub and cover with a little bit to let out the steam. Microwave for 2-5 minutes til soft (cook for a minute at a time and shake and check pumpkin after each minute). Drain off any excess water and mash with a fork.

Place mashed pumpkin, treacle, honey, oil and vanilla extract into a small bowl and lightly whisk with a fork. Mix remaining ingredients in a mixing bowl. Pour pumpkin mixture in and stir.

Spoon mixture into prepared slice tin and smooth with the back of the spoon. Bake for 25-30 minutes until golden brown. Cool in tin and then cut into squares or bars.

On the Stereo:
Burial: Death in June
Posted by Johanna GGG at 12:34