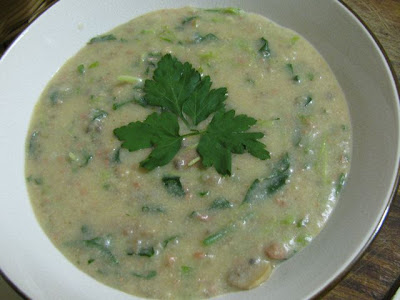 All inspired, I set out for the supermarket yesterday to buy ingredients to make a breakfast burrito for dinner. But by the time I started to prepare dinner, the day had got away from me so I made a quick and easy soup instead. I was able to draw on a bounty of ingredients, both newly purchased and some leftover from previous meals.

One whimsical purchase was the vegetarian bacon, known in our household as facon (fakin’). It is rarely seen in my cooking because I am not a big fan of faux meats – apart from vegetarian sausages. But every now and again, I get all nostalgic for the time before I went vegetarian and have some facon. Then I realise its taste is too strong for me and I avoid it for another few years. 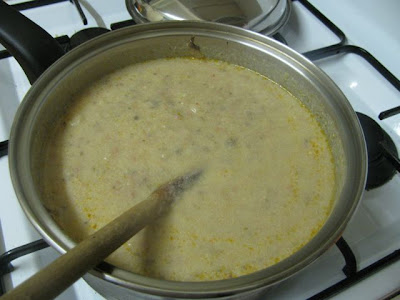 Back in my meat eating days I did eat bacon quite a bit. It appealed because it doesn’t look like an animal and very little of it was needed to flavour a meal. I ate on the cheap in these student days and some rebellious rashers with little sprouts of hairs and bits of bone made me feel a little queasy. Anyway, after reading Charlotte’s Web the idea if eating pig was never easy. It is something I can easily live without.

Unlike E, who loves a piece of bacon with his eggs at breakfast time. He swooned over this soup, particularly the facon. It was creamy and richly flavoured with an honourable mention to my home made stock which I shall write about another time. I blended it a little but wanted some of the chunky texture of onion, mushroom and bacon to remain. E wasn’t so keen on the few large chunks of potato but they were so soft that I quite liked them. 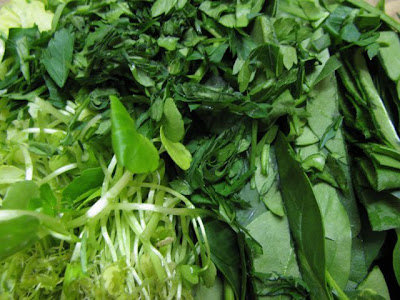 The soup might have been a bit heavy but was lightened with the fresh green splashes of wilted spinach, watercress and parsley. Some might prefer to serve greens alongside such a rich soup rather than together but I love having a meal in a bowl of soup. I am looking forward to finishing off the leftovers tonight.

I am sending this soup to Jacqueline of Tinned Tomatoes who has recently come out from behind her pseudonym of Holler to reveal her actual name (So nice to have a real name but I like Holler too – can I combine them – Joller, Jacquoller, Hollerine???). She hosts the No Croutons Required event with Lisa of Lisa’s Kitchen. This month the theme is a vegetarian soup or salad featuring leaves.

*If you are not a fan of faux meat (and I sympathise if you aren't) then you can substitute real bacon or a tsp of smoked paprika here. I have also realised that facon isn't gluten free.

Heat oil in a large saucepan and fry onions over low heat for about 5 minutes til golden brown. Add facon and fry 3 minutes til it starts to crisp up. Add mushrooms and garlic and fry for about 10 minutes til soft.

Now add potatoes, stock, chilli paste and mustard. Bring to the boil and then simmer about 30 minutes until potatoes soft and falling apart.

Remove from heat. Stir in cheese till melted and then add yoghurt. Roughly blend with a stick blender leaving some of the soup still chunky. (If you don’t have a stick blender you can put half the soup into a blender to puree and return to the saucepan.)

Stir in spinach, watercress and parsley into hot soup and allow a couple of minutes for them to wilt before serving.

On the Stereo:
Chill with Bach
Posted by Johanna GGG at 18:42