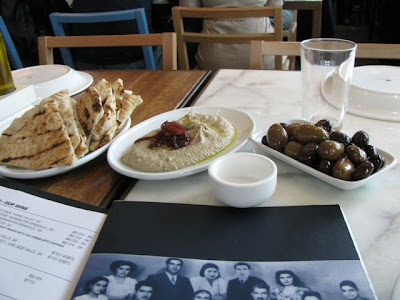 Recently we have had the pleasure of watching the two series of the 1970s British television series, the Lotus Eaters. The title is derived from Greek Mythology where those who ate from the Lotus Tree lost the desire to return home. When we first booked to eat out at Hellenic Republic in East Brunswick for E’s birthday (and Sylvia’s first restaurant meal), we made many jokes about being Lotus Eaters. Having eaten there twice this year, I can confirm that it is that good! Hellenic Republic seems to be riding on the zeitgeist. The culinary genius behind the restaurant is George Colombaris who has become a household name in Australia thanks to his stint as a judge on Masterchef Australia. One friend recently said she would leave her husband for him. He has inspired such a following with his passion for food. We first visited in April before the Masterchef phenomenon, but when we visited last weekend with my siblings, all the staff wore t-shirts saying ‘George says, yeah’ to advertise a charity cooking event. There was no ignoring his celebrity status, which seems well-deserved when you taste the excellent cooking. 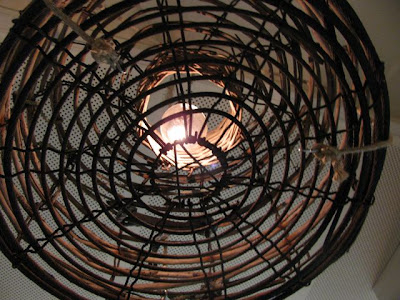 The space is furnished with an elegant minimalism. It is large and light with the kitchen open to the public and wine on tap (so my sister tells me). The menu is interpersed with choice words of wisdom from Greek mothers on the menu. Look up and you will see large fisherman baskets and rows of wooden chairs hang from the ceiling. But what catches the eye are the tables crowded with boisterous families sharing plates of good food. It nicely reflects the menu’s modern take on Greek taverna food. 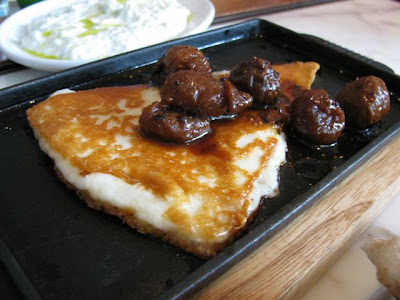 The service was excellent. The staff were friendly, prompt and ready to help with any query. Visiting with a baby in a capsule and also with my nephew who needed a high chair posed no problems. And the prices were quite reasonable for the quality of the food. On both visits with family, we arrived first and, by the time the group had arrived, I had the order ready. It is a menu made for sharing plates of food. On E’s birthday my mum was a little late but my dad had taken the wrong train and didn’t arrive until champagne was being served. Excellent timing! 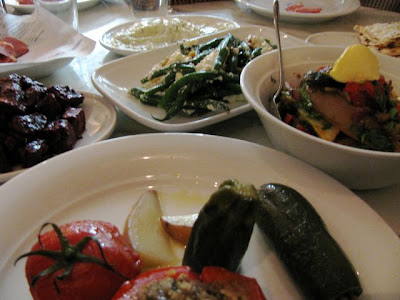 We had a lovely spread of pita bread, tzatziki, kefalograviera saganaki (grilled haloumi served warm with peppered figs), fasolakia (green beans with feta and pine nuts), patzari (beetroot roasted in cumin served with yoghurt), gemista (vegetables stuffed with a herbed rice) and krokos yaourti briam - greek vegetable stew with saffron yoghurt. Stand out dishes were the saganaki which was sizzling hot and crisp, and the wonderful textures and flavours of crisp green beans with pine nuts and feta. We didn’t have dessert on that night as E’s birthday cake was waiting at home. Last weekend, we had already ordered the olive, pita bread and melitzanosalata (eggplant dip) before my brother Andy arrived with Erica and baby Cooper, and had almost finished it by the time my sister Fran and her partner John blew in. I was too hungry to wait. E was most displeased that I ordered eggplant dip because it is not his favourite vegetable but he gallantly tried it. He pronounced it superb. The dip was silky smooth and smoky and tasted a treat with the wonderful soft chargrilled pita bread. 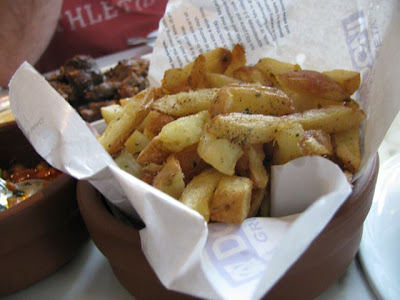 Since our last visit I had seen the tiganites patates on other blogs and they looked like the most delicious crispiest chippies which came in a cute claypot lined with retro printed paper. So they were high on my priorities this time. They were as good as I had hoped. I also had to have the green beans with pine nuts and feta again. We also ordered the domathakia (stuffed vine leaves) and lots of lamb spit, pita bread, saganaki and tzatziki. I mention the lamb spit because I hesitated when I asked the waitress if I had ordered enough and she suggested two rather than one lamb spits. Not a good decision for a vegetarian to make! The rest of the table agreed with her and E – emboldened by his eggplant discovery – overcame his lamb-aversion and found he loved the dish. 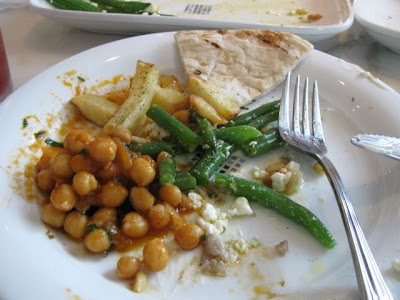 I was ready for dessert this time. Possibly because Sylvia, who had slept through her first visit, decided she needed to be in my arms this visit and take it all in. This is great if you are trying to reduce your calories, because a baby in arms slows down the eating. Admittedly, I didn’t do too badly. We ordered loukoumades (greek donuts with nuts and attiki honey) and baklava yianniotiko. The baklava was heavy with walnuts and sugar rather than many layers of pastry soaked in honey. Not my favourite baklava, especially when I bit into the decorative clove. But I loved the donuts. I wasn’t keen after the syrup soaked donuts at Baba. Fortunately Fran had ordered the Hellenic Republic doughnuts before and recommended them. They were crispy fried balls with a fluffy inside (almost as good as the Victoria Market doughnuts) served with a pool of honey at the bottom of the plate. It was heavenly to dip the doughnuts into. I am looking forward to another visit to Hellenic Republic. Two excellent meals there have firmly fixed it in my memory as the land of lotus eaters. In years to come, Sylvia can be proud of this being her first restaurant outing.