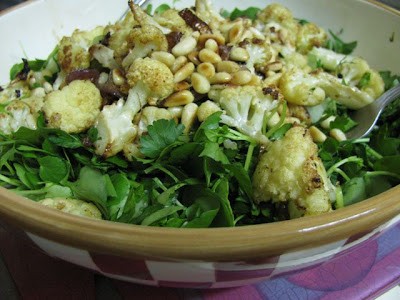 I was in the supermarket hoping against hope to find gruyere cheese and good chewy sourdough bread for onion soup. Chance would be a fine thing! There was no time for rushing around the smaller shops because my mum was at home minding the baby. So I improvised. The area of Melbourne where I live has a lot of middle eastern communities living there so the natural thing seemed to be to substitute Turkish bread and halloumi.

The whole meal had a little of the breathless rush of Ready Steady Cook. You know? The television show where cooks are given a few key vegetables and asked to create a meal out of them with the clock ticking!

I had come home from my mum’s on the weekend with a bag of onions, some celery and a wedge of pumpkin. The pumpkin will have to wait for another post but for dinner I didn’t have to think hard about using the onions and celery. The choice of vegetables seemed serendipitous. For some time now, I have been wanting to try Nigel Slater’s no tears onion soup. And I had been reading and re-reading a Karen Martini recipe in the Sunday Life Magazine in the way that I do when I am really really interested in trying it out. 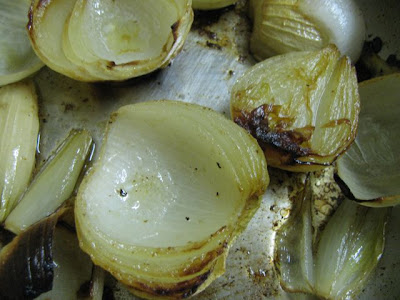 Not only did I have the onions for the soup but I also had frozen home made stock, which I had promised myself I would use when I tried the recipe. It was a dark flavoursome stock that seemed right for a soup which traditionally has beef stock. I only used half the stock that Nigel used but when the bread goes in, it soaks up quite a bit of liquid so I have increased it from 750ml to 1 litre in the recipe below.

It is a brilliant idea to roast onions rather than spend tedious hours chopping them. In the past I have tried everything to keep me from crying, including swimming goggles, but there is no avoiding the tears when I chop an onion. With the added depth of taste of roasted onion, I can’t see why I would make onion soup any other way.

My Turkish bread and halloumi was a disaster that we could live with. By the time I was doing this, I was hurrying and hungry. I forgot to toast the bottom and burnt the halloumi on top to a crisp. There is a photo of the least burnt piece in the soup but you can see behind the bowl just how burnt the other slices were. I still ate them because I don't mind a little charcoal. I would try sourdough bread with gruyere if it was available but, if not, then I could happily have Turkish bread and halloumi again. 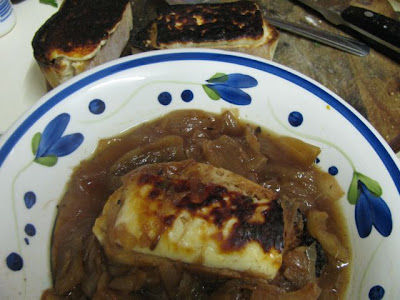 I had been tempted by Karen Martini’s description of the celery (hers was called Celery, parsley and lemon salad) as ‘refreshing’ but once I looked closely I realised I would have to make changes. The recipe called for segments of lemon and 2 chillis. I wasn’t feeling so brave. I can only take so much of lemon and in future would need some honey or maybe cranberries to sweeten the salad a little, as well as a bit more chilli. I also roasted the onion because I prefer that to raw onion. And I didn’t bother to stand the celery with salt and sugar for 20 minutes before rinsing. This might have added sweetness and seasoning but I prefer my celery fresh and crunchy. It was especially good with the crispy cauliflower florets and pinenuts among all those green leaves. 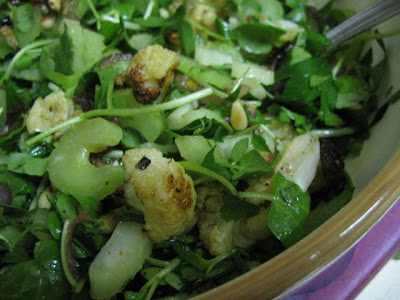 The salad was a good addition to the meal. I think the soup might have been too rich and heavy without it. I rarely feature onions or celery, although they are often base flavours in my cooking. It is a bit awkward eating soup and salad together but we managed it. I was surprised to hear that E liked the salad, although the soup was a bit too much for him. Perhaps if I don’t burn the cheese to a crisp next time he will appreciate it more. As for me, I thought both dishes were delicious and I look forward to making them again.

Peel and half onions and put in a roasting dish with butter and seasoning. Roast at 200 C for about 1 hour or till soft and charring at the edges (10 minutes before they came out of the oven, I bashed the halves so they collapsed into layers).

When done chop onions (I did this with the ends of scissors in the tin to avoid losing too much lovely buttery sauce) and tip into a large saucepan. Heat onions and pour in the wine. Simmer till almost absorbed. Add the stock and garlic and simmer for about 20 minutes.

Once soup is ready toast the bread slices and then melt slices of halloumi on Turkish bread under the griller (broiler) till golden brown. To serve, place a piece of bread in a soup bowl and ladle soup over it. Serve hot.

Celery, Watercress and Cauliflower Salad
(adapted from the Sunday Life magazine of the Age, 7 June 2009)
Serves 4 as side

To make dressing, whisk oil and lemon juice together. (In future I think I might add a little honey to this.) Add seasoning to taste.

Place celery, chilli, parsley and watercress in a salad bowl. Scatter with cauliflower and onion and pinenuts. Drizzle dressing over salad.

On the Stereo:
Repeat: the best of, Vol II – Jethro Tull
Posted by Johanna GGG at 20:46