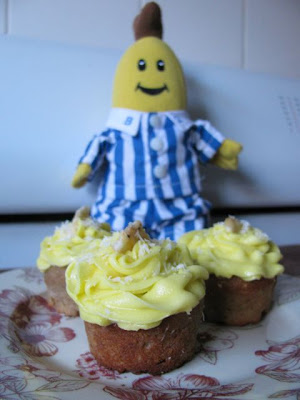 Children parties can make the most confident of bakers quake in fear when it comes to nuts. They have become a no-go area. My niece Quin, who started high school this year, told me they are not allowed to bring any food with nuts in it to school because one of her classmates has such extreme allergies. I can’t help feeling sad about all these childhoods bereft of peanut butter sandwiches. But, there is good reason, as demonstrate by the recent local news story of the boy with nut allergies on cadet camp who died when his rations included peanuts.

As regular readers would know, my wee niece, Grace, is a celiac and so I am always on the lookout for a good gluten free recipe. Her mum (and my sister, Susie) is also on the gluten free wagon at the moment. There are many flourless cakes and cupcakes which use ground nuts. I love them but am aware that they are no good for taking to kids parties for Grace. 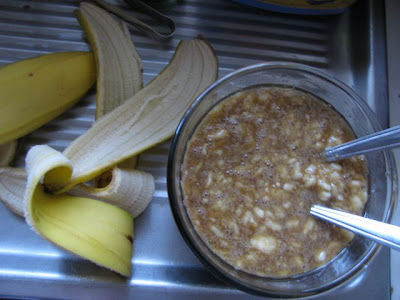 So last week when I spied a gluten free banana and coconut cupcake recipe on La Tartine Gourmande, I wanted to try it out for Grace and Susie this weekend. But it was my nephew Cooper’s first birthday party and I was worried lest any of the other kiddies had nut allergies. So I wasn’t brave enough to bake them with ground hazelnuts.

The other challenge in the recipe was quinoa flour, which I don’t have in my GF flour repertoire. When baking gluten free, I try to bake food that everyone will love and that does not have too many unusual flours for me (or other home bakers). These cupcakes also have buckwheat flour, which I quite like. The other gluten free flour I love baking with is soy flour. I decided to substitute it for quinoa flour and, inspired by Ricki’s quinoa cupcakes last year, I decided to try substituting cooked quinoa for the hazelnut flour.

For those who have not yet encountered it, quinoa is a small grain, a bit like rice but chewier and more nutritious. The quinoa I have used previously has always been fine when cooked without rinsing but the one I bought last week was organic Royal Quinoa grain (‘a protein superfood from the Andes Mountains’). When I started tasting it to check if it was cooked, it was quite bitter as I have read that quinoa can be. It was fine once I rinsed it but begs the question, how do you know if the quinoa is bitter or not? After all, who wants to taste dried quinoa! 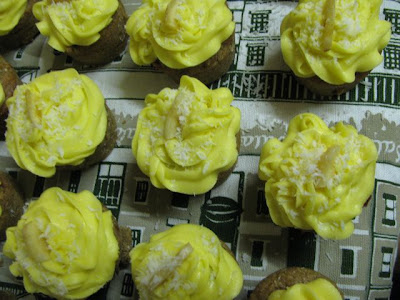 Lastly I iced the cake with my new icing gun. After my first attempt at using this icing gun with my nutella cupcakes, I am now starting to get the hang of the toy. It was much quicker than using a piping bag, although it was a bit tricky to take apart at the end to wash it. I love the look of a fluffy pile of frosting even though I am not so keen on eating all that icing. But for a kids party, I thought these pretty cupcakes were just the trick. 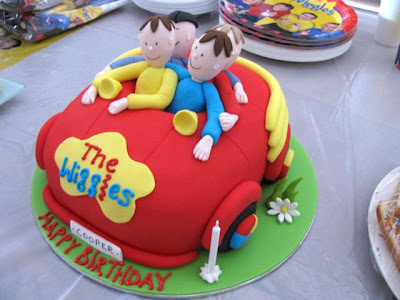 The party was this afternoon and chaotic but fun. Cooper is too young to really understand but he couldn’t resist sampling some of the birthday cake. His parents had bought him a very groovy Wiggles birthday cake. It looked so cute and the dense flourless chocolate cake tasted delicious. And that lovely red icing was just too tempting. It amused us to find him with red icing smeared all around his mouth. The wee rascal! 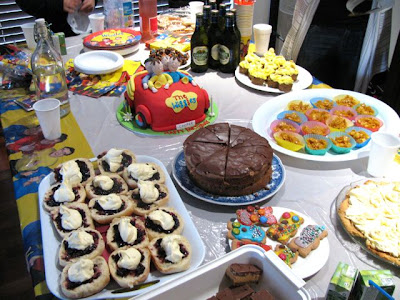 The table was groaning under the amazing array of food. Dips, spring rolls, arancini balls, cheese, vegetable sticks, grubs, cupcakes, chocolate sponge cake, hedgehog, fairy bread, chocolate peanut butter slice, scones, caramel tart, honey joys and I am sure I have missed a few others. The Wiggles were the theme of the day with lots of wiggles plates and cups etc. 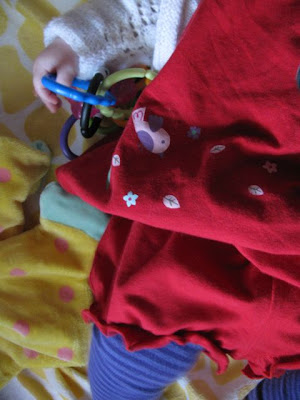 Sylvia (who was in her harness the whole time I made the cakes, but not when I was icing) is now an old hand at parties after her first one last week. She wore her little red dress and breeches that my sister, Chris bought her in Paris and looked very smart. She even got a party bag of lollies at the end of the day with all the other kids. In fact, there was so much food that no one left without a swag of goodies. 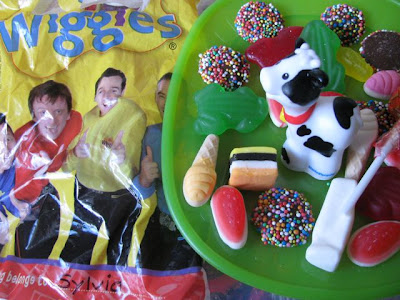 I found the banana and coconut cupcakes a little sweet but I think that this is needed with gluten free baking because the flavour of the wheat flour is missing. For that reason, the classic flavours of banana and coconut also enhanced the taste of the cupcakes. The dessicated coconut gave a nice texture which I suspect hid the quinoa as everyone who tasted them was surprised when I mentioned it. I think the quinoa gave them a bit more body and I liked it so much I would like to try it in savoury muffins.

Grace turned her nose up at them when I said they were banana and wouldn’t taste them but Susie thought they were great, especially the icing. Others seemed to like them too. I really enjoyed the cupcakes but would probably prefer them without the icing or with cream cheese frosting. Icing is mandatory at a kids party unlike nuts. I am sure Cooper would have enjoyed smearing it across his face if given the chance.

In an ironic twist, I am sending this to PJ of Seduce Your Tastebuds who is hosting the Let’s Go Nuts event, founded by Aqua. Yes, after all my talk about nut-free baking, I have realised that coconut might be considered a nut as it is the theme of the event this month.

Preheat oven to 180 C. Prepare cupcake trays by greasing or lining with cupcake papers. If you use silicone trays like me you don’t need to prepare at all – other than hunting down where the husband last hid them when putting the dishes away!

To cook the quinoa, place in a small microwave proof container and cover. Microwave for about 2 minutes at a time until the quinoa is cooked. Mine needed rinsing and took about 7 minutes and needed to be drained a little. Alternatively cook quinoa as you usually do.

Place quinoa and remaining wet ingredients in a bowl and lightly whisk with a fork. Mix with the dry ingredients til combined. Spoon into cupcake trays. Bake for 20 minutes or til a skewer inserted in the middle of a cupcake comes out clean. Sit 5 minutes, turn out and cool on a wire tray.

To make icing, mix together icing sugar, coconut milk and food colouring to make a fairly stiff paste. Pipe or spread on cupcakes. Break up the banana chips and place a piece in the top of each cupcake. Sprinkle with coconut.

On the stereo:
Spektral Magik: Art Abscons
Posted by Johanna GGG at 18:56