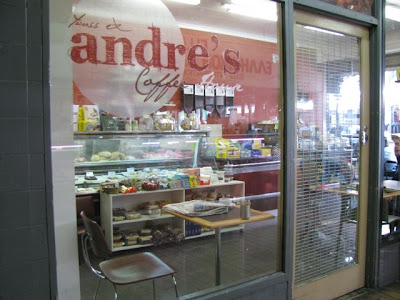 I first came across Andre when he had a fruit and nut shop where he now has his café. I especially loved the sesame seed, honey and nut treats he sold. But recently all the bins of beans and nuts were cleared out and replaced by a modern café full of pretty cakes and baskets of dense bread. I’ve been buying bread there for some time but today was the first time we have eaten in. 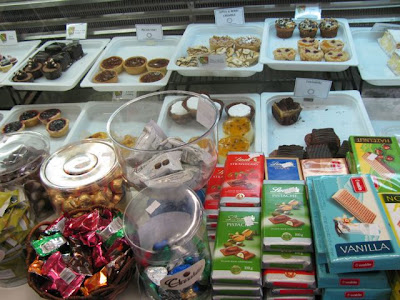 The café is quite small with just a few tables and chairs but people come and go a lot so it is easy to get a seat. It is just opposite Elli’s Deli at the entrance to Coburg Market and so it a great place to people watch. Andre is a laidback friendly guy who enjoys chatting with his customers. His cheery manner makes everyone feel welcome.

E and I walked in with Sylvia in the pram and caught Andre cursing his coffee grinder. No matter, E assured me that the coffee was lovely. Andre suggested that we try a pumpkin and spinach filo savoury. I ordered one. E chose to have toast with his mother's spice mix (I didn’t catch the name but will find out) which had zumac, oregano, rosemary, thyme, sesame seeds, among other things. He didn’t have any cold drinks for me and suggested I run across to the next door Deli for a bottle. He plans to have a cold drinks cabinet in soon. 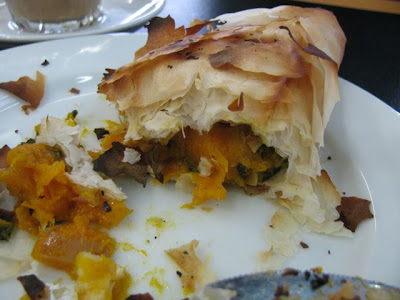 My pastry was filled with lots of soft pumpkin and a handful of spinach but it was surprisingly tasty. E loved his toast with the spices although it could have had it a bit less toasted. I overheard Andre saying he also served his mum’s silverbeet, sultana and sumac pastry but when I expressed interest he said they had sold out and, due to a bereavement, his mum wasn’t able to make any more for today. 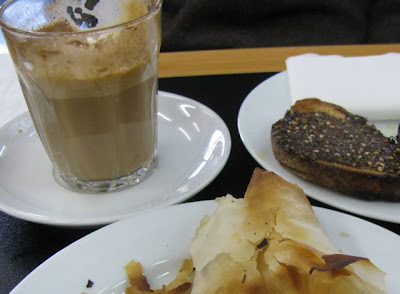 The pastry was quite light so I still had lots of room for a sweet treat. I chose a cherry ripe slice, party because of the colourful coconut on top. It was nice. The chocolate topping was a bit hard after being in the fridge but I did enjoy the occasional pieces of tart cherry through the sweet coconutty filling. E had a pecan tart and took home half of it. Tasting it at home, I found it very pleasing with a soft sweet filling. I have also tried the rich gluten free chocolate cakes and can highly recommend them. 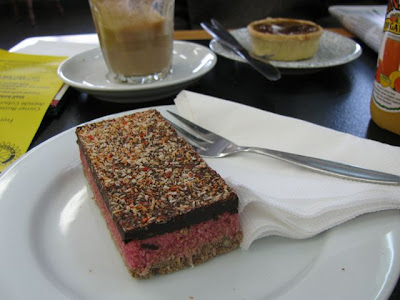 But if you don’t want any cakes or fancy pastries, then I could highly recommend the toast. This is why I am familiar with Andre’s. If you want a look at it, I have featured his spelt bread in my last post, plus you can see his caraway rye bread and another sourdough (maybe the honey and oat) in other posts. They really are worth trying if you are in the neighbourhood. At the moment he is selling them on Thursdays and Saturdays but will sell any unsold bread for less in the next day or two. 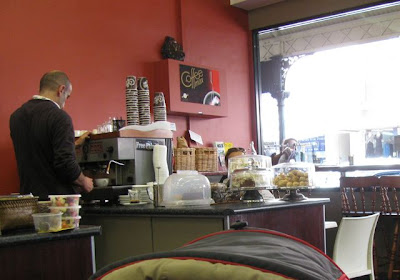 We left with a loaf of the honey and oat bread. It is superb. Soft, substantial, malty, with a chewy oaty crust. Then we went off to get our freebie CD that was given away with The Age newspaper today, to talk about curious bric-a-brac with the women in the op shop, and pace the aisles of the supermarket.

The oddest thing about the high street today was seeing people wearing santa hats. When I first saw a santa hat on an old woman spruiking outside a clothes store, I thought she might be away with the fairies (or the elves as the case may be). Then we passed buskers playing brass instruments and wearing santa hats. Then we saw Santa Claus himself over the road. It must have been Christmas in July. Sylvia smiled and so did we. Perhaps we were imbued with the community spirit from Andre’s. Or perhaps we were just looking forward to getting home for a slice of his wonderful bread.

Update (Sept 2009) - he now has a drinks cabinet and serves foccaccia with cheese/tomato/ham combinations. I have tried his mum's silverbeet, sultana and sumac pastries and they are superb.