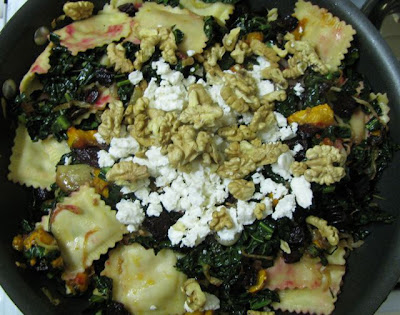 E has been watching far too much MasterChef and his conversations about food all seem to begin ‘Tell me a story about this…” (insert cheese, bread, potatoes, apples or whatever food you have in front of you). Of course that is what my blog is about and today I will tell you the story about the finest salad I have had all winter. 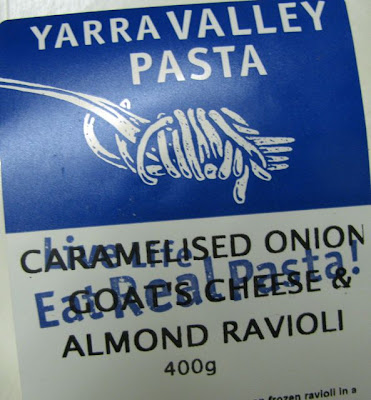 It started last week when I was shopping at Queens Parade in Clifton Hill and happened upon some Yarra Valley Caramelised Onion, Goats Cheese, and Almond Ravioli. I get fed up with the same old ravioli fillings. It is usually either spinach and ricotta or roasted vegetables. So this filling seemed new and fancy. It was ridiculously expensive, but that was why I passed up cute but pricey babies wear for Sylvia. Far better to spend it on food! Beside, the Yarra Valley was affected by the bushfires in February so it seemed a good way to support the survivors.

I took the ravioli home, put it in the freezer and sought some inspiration for how to use it. Often I serve ravioli with a plain tomato sauce but I wanted to showcase this one. I had seen an inspiring ravioli salad but couldn’t remember where. A search of the internet threw up Heidi’s Hazelnut, Chard and Ravioli Salad. I think this was the one. The photo was certainly enticing enough. 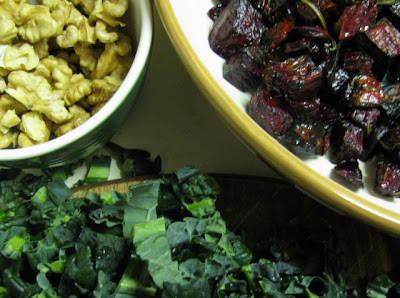 But I had some other ideas for a salad. I had found a bunch of Tuscan kale (cavolo nero) in one of the fruit and veg shops in Clifton Hill on that same expedition. I had also found a good feta at O’Hea Street Bakery and Victorian walnuts in their shells in a local shop. Most walnuts I find are American so it was exciting to find some local ones even if they needed shelling. Finally I had some pumpkin and beetroot from the supermarket. I also had some walnut oil at home that was in need of a salad to dress. The pieces of the jigsaw puzzle were falling into place.

Heidi’s salad proved to be a helpful springboard to propel me into many flights of fancy about the salad I might make. While I too had ravioli, roasted pumpkin, nuts, cheese and citrus, the similarities ended there. Most useful was the way her recipe helped me think about salad.

I get a little concerned that we are overusing the word ‘salad’. I questioned what makes a dish a salad instead of just pasta. I never intended this to be cold or room temperature. It isn’t summer. And there is not a tomato nor lettuce leaf in sight. What I decided made it a salad was that the main ingredients were separate components that were brought together to be tossed in a dressing and gently warmed. If I had cooked them all together I am not sure they would have been a salad. I liked the idea of the kale taking the place of the bed of lettuce leaves that is often seen in salads. The oil, vinegar and citrus juice combination is characteristic of vinaigrettes. After some thought, I felt I could claim it to be a salad. 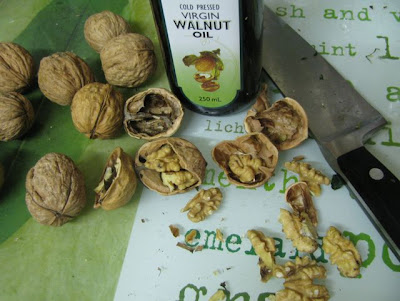 I made my salad last night. Of course there was drama. Having a small baby around always helps. When I had bought the walnuts in their shells I had been concerned that I didn’t have a nutcracker. But I have fond memories of cracking fresh walnuts with the heel of our shoes when we were little. I asked the guys behind the counter and they told me I could crack them with my bare hands. I am not so hardy (or skilled). Instead I used the end of my large chef’s knife to bang them till they cracked. Poor Sylvia was having her bath nearby and jumping at the sound. I also had to send E over to the oven to stir the kale (Is it reducing? I asked and got a confused answer) and check the roasting vegetables (and being brought the roasting tray to inspect) while I fed Sylvia.

It was lovely to finally sit down to eat. The salad was heavenly. Far more robust than your typical salad, it was full of sturdy flavours and textures that reflected our wintery weather. The ravioli was unlike any other I have tasted. Never before have I had such a soft fluffy melting filling. I was pleased that the accompanying salad gave it such body and boldness. Sweet, tart, salty, nutty, oily, spicy and full of the soft yielding roasted vegetables. We both had to have second helpings. Me, because it was so good. E, because he didn’t get enough ravioli in his first helping. But he was impressed with it. 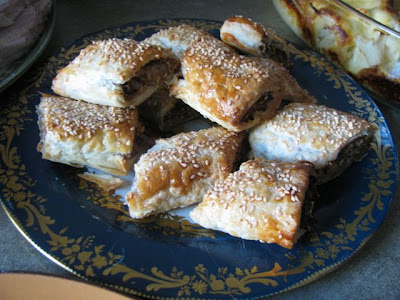 Before making the salad I had made a big batch of Vegetarian Sausage Rolls to take to my parents’ place for my brother Andy’s birthday. Mum was making a roast dinner and I had a yen to make these after seeing the picture of Shauna’s on The Amazing Adventures of DietGirl. While sausage rolls are not a traditional part of a roast dinner, I thought of them as nutroast en croute. Everyone loved them. My brother, Dave, who loves his meat, said he wouldn’t have known they were vegetarian except that I made them. High praise indeed! The roast dinner was great, followed by Erica’s gluten free chocolate cake. 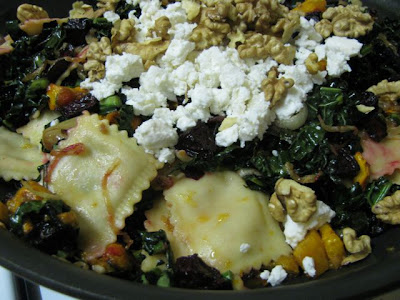 We got home just in time for the MasterChef final but I was prepared not to do any cooking for dinner. We had some sausage rolls with leftover salad. It was an excellent end to the day.

I am sending this pasta dish to Pam of Sidewalk Shoes who is hosting this week's Presto Pasta Night (#123), an event founded by Ruth of Once Upon a Feast.

Heat oven to 220 C. Place beetroot, ¼ tsp, salt, 1 rosemary sprig, 1½ tbsp olive oil and bay leaf in a roasting dish. Roast for 1 hour and 20 minutes til soft inside and crispy outside. Place pumpkin, ¼ tsp salt, 1 rosemary sprig, and 1 tbsp olive oil in another roasting dish and roast for 40-50 minutes until soft inside and crisp outside.

Meanwhile lop the pointy top of the garlic clove. Make a little bag out of foil, place garlic in it and drizzle with about ½ tbsp of olive oil. Place in on one of the roasting trays and roast for 30 minutes. Cool a little and squeeze the soft garlic bulbs out of the skin. Set aside.

While the vegetables are roasting, heat 2 tbsp olive oil in your largest frypan over low heat. Toss the onion slices in and fry for about 30-40 minutes. When they are ready, set aside in a bowl and add the kale to the same frypan. Fry for about 20 minutes.

Cook the ravioli in salted water with a slurp of oil, according to the instructions (mine were simmered 5 minutes from frozen).

Mix all the dressing ingredients together.

To assemble, arrange kale, onions, pumpkin, beetroot, garlic, most of the walnuts (set some aside to scatter) and ravioli in the large frypan. Drizzle with dressing and toss to coat. Warm gently over low heat (about 2-5 minutes). Scatter with feta and remaining walnuts. Serve warm.

On the stereo:
Seasons in the Sun: Spell
Posted by Johanna GGG at 23:46