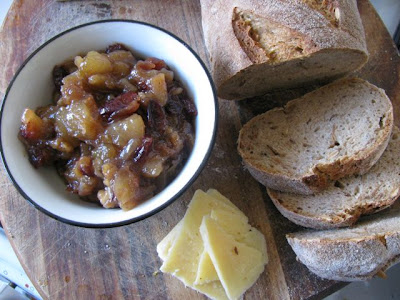 I’d like to believe that if I wasn’t at home with a baby that I would be going out and seeing everything I am missing right now but I know the reality is that many events would still slip by in the whirlwind of everyday life.

The difference at the moment is that I have a lot of time to listen to the talkback radio and find out about events I would love to see. Michael Nyman is in town and I would love to see him play. It is the Melbourne International Film Festival and I have heard quite a bit of discussion about the premiere of an Australian film called Bailibo , about the murder of journalists in East Timor in the 1970s. I also would be interested to see another Aussie film, Beautiful Kate, which is at the cinema soon and stars some of my favourite actors.

But the most fascinating event I have heard about lately is the Bobcat Ballet performed to Bohemian Rapsody. I mentioned it to E and he made me laugh with his guesses. So I thought I would do a ‘One out of Three Aint Bad’ question for my favourite quiz show, Spicks and Specks. Below is a list of the real performers and the ones that E guessed. Can you guess which one is correct? 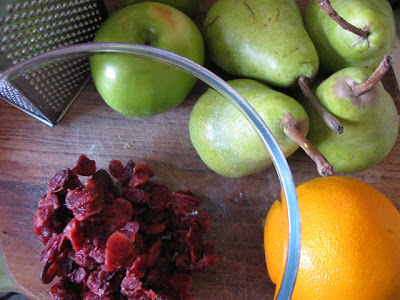 Yes, it is C. What a bizarre idea! It is happening in Mackey in Queensland but may come to Melbourne. If it does I would love to be there but probably wont make it.

Although I am missing some events, there are others that I can go with a baby, of which I had previously been ignorant. One of these is Rhyme Time at my local library. It is a morning session where babies get to sing and dance to nursery rhymes. It is noisy and fun but the most fascinating aspect of it is to see the librarians directing mothers where to park their prams in the foyer and beside the bookshelves. 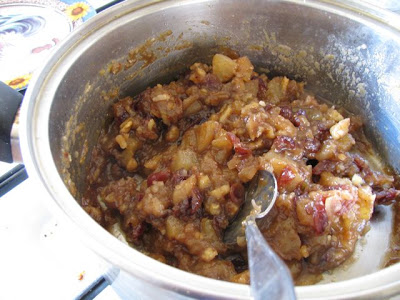 Afterwards I often go to Andre’s for his lovely sourdough bread. A few weeks back I had a yen to make pear and walnut chutney from a recipe I had jotted down years ago. Pears are in season right now and often reside in my fruit bowl. I had the pears and walnuts but no sultanas. The recipe called for firm pears so I didn’t think I could put off making it too long before I had soft juicy pears. If I made it before Rhyme Time, I could enjoy it on fresh bread at lunchtime. I remembered my tomato chutney that had cranberries in it. This seemed an appropriate substitution for the sultanas.

I set about preparing the ingredients in the morning and it took longer than I anticipated. As usual, I found myself rushing and barely had time to simmer it as long as the recipe said. I had to turn off the heat as we were running out the door. I left it to cool while we were out. I returned with some dense spelt bread at Andre’s. Lunch was a simple repast of good bread, good cheese and excellent homemade chutney. 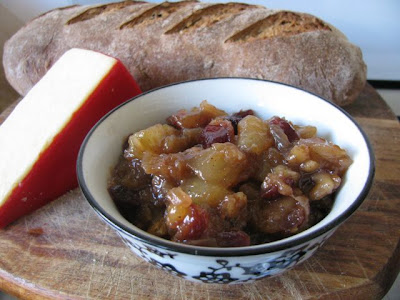 It looked a little like fruit mince, but it was spicier. I added a few more spices than in the recipe but nevertheless it was a sweet chutney and more chunky than other chutneys I have made lately. The addition of walnuts was surprisingly pleasing. It was great with bread and cheese, lovely stirred into a curry, but not so good with vegie sausages.

I was curious about the combination of pear and walnuts. It is such a lovely winter pairing. It seems I am not alone in my appreciation. There were many great ideas on FoodBlogSearch, so I have listed just a few below.

Pour orange juice and zest over the cranberries. Set aside.

Bring cider, onions, apples and pears in large saucepan. Bring to the boil, reduce heat and simmer for about 30 minutes. Add cranberry mixture, sugar, salt and spices. Stir an additional 20-30 minutes until the mixture has thickened. Add the walnuts and leave to cool slightly. Store in sterilised jars. (I just poured boiling water over my jars because I knew it wouldn't last too long.)

On the stereo: All of this and nothing: Psychedelic Furs
Posted by Johanna GGG at 10:18