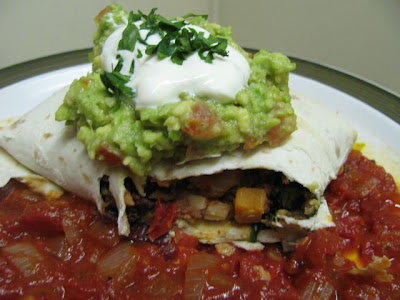 I’d never heard of breakfast burritos until I made burritos last year and was seeking information on Wikipedia. The idea of a tortilla filled with bacon and eggs did not enthuse me at all but I had visions of an egg-free tofu scramble full of all the things I love in a veggie fry-up when we eat out for brunch. Once the idea got under my skin it was like an itch I had to scratch.

What a perfect breakfast it would be. There was one problem! I rarely put a lot of energy into breakfasts these days. . I’ve never been a morning person but in my life before Sylvia, I would enjoy making a nice brunch and the weekend newspaper. Now that we have a baby who also loves a sleep in, my mornings start with feeding her and then I grab a piece of toast and some fruit. No pancakes or potato scones have graced our mornings lately. The most effort goes into an interesting smoothie. 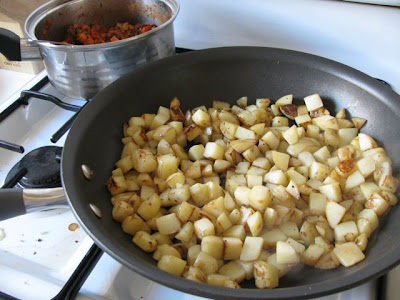 When E asked for burritos for dinner recently, it seemed time for the breakfast burrito. After all, if you can’t have it for breakfast, dinner is the next best thing. Actually, it is a bit of an all day project so unless you rise particularly early, preparation is needed whether you make it for breakfast or dinner.

I wanted my breakfast burrito to reflect the best of veggie fry-ups and to have a Mexican flavour as well. So my recipe involves four components for assembling and serving. The refried beans were inspired by an Alison Holst recipe and quite smoky and spicy with a chipotle chilli in adobo sauce. The tofu scramble had fried potato, mushroom, spinach and facon. I decided to add some facon for a bit of fun, although the smokiness of the chipotle means it is by no means essential. The beans and scramble are stuffed into a burrito that is then served with a tomato sauce, guacamole and some yoghurt. 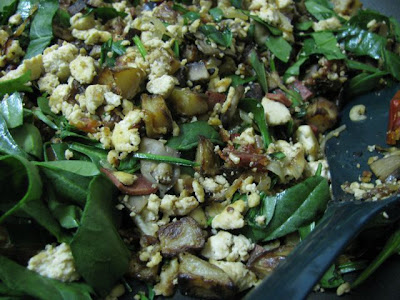 You can see from the long list of ingredients and many instructions in the recipe that this is no quick and simple meal. It was a lot of work, but worth it. The main effort went into preparing the fillings and assembling the burritos. I started cooking the beans and fried potatoes early in the day. All the components can be made ahead, especially if you want to have it for breakfast, but if you have the energy, the tomato sauce and guacamole can be whipped up while the burritos cook. I had a leftover burrito for lunch the next day with some yoghurt, tomatoes and cucumber if you want a simpler version. 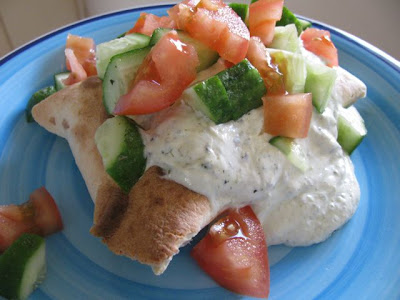 The impression I have got of the breakfast burrito is that it is full of protein and fat. I wanted one that was healthier while still tasty. Both E and I were impressed with my breakfast burrito. It was full of complex flavours. The chipotle chilli made it rather spicy despite not much heat in the rest of the dish. I wish I could have stuffed more filling in the burritos. They were delicious but not as chunky as I had hoped. Though, I was glad not all of the scramble was used in the burritos as I enjoyed eating some of the leftovers on toast. Now I am looking forward to the day I organise myself enough to eat these for breakfast!

I am sending this to Jenny of All Things Edible who is hosting Meeta’s Monthly Mingle this month. The theme is Mexican Fiesta.

To make the Refried Beans: Heat olive oil in a small saucepan. Add onion, garlic, capsicum and carrot. Stir over low to medium heat for about 10 minutes or until vegetables soften. Add tomato paste, cumin, chilli and beans. Heat through and the remove from heat. Roughly mash with a potato masher.

To make the Scramble: Start by pressing the tofu while you prepare the rest of the meal. I place my tofu in a colander and put a bowl and some heavy tins of vegetables on it. Then in your biggest frypan, heat 1 tbsp oil and fry the potatoes for about 45 minutes til cooked and golden brown. Set aside. Heat the other tablespoon of oil and fry the onion for about 10 minutes til soft and golden. Add remaining ingredients except cheese and stir for 5-15 minutes til mushrooms are cooked and spinach is wilted (I didn’t note how long it took so can’t quite remember). Remove from heat and stir in cheese.

To assemble the burritos: firstly preheat oven to 180 C and prepare a large baking or roasting dish to cook them in. Place a tortilla on a flat surface and dollop a large spoonful of refried beans in the middle. Then place a large spoonful of tofu scramble on the beans. Wrap up the burrito (fold top and bottom together and then fold the sides in is the way I do it). Place in a large greased roasting dish with the folds on the bottom. Repeat with 5 other tortillas. Spray with olive oil and bake at 180 C for about 15 minutes or until starting to brown. While the burritos are in the oven, make the tomato sauce and the guacamole.

To make the Tomato Sauce: Heat oil in a small saucepan. Cook the onion a few minutes and then add the tomatoes and flavourings. Taste to check if you need to adjust the flavours. Bring to the boil and simmer for 10-15 minutes until sauce thickens but still spreads easily. I did this while the burritos were cooking in the oven.

To make the Guacamole: Mash the avocado in a small bowl. Add remaining ingredients and mix to combine. Taste and add more salt and cayenne if required.

To serve: Spread a few spoonfuls of tomato sauce on a large plate. Place a warm burrito in the middle. Dollop on top a spoonful of guacamole and a spoonful of yoghurt. Garnish with chopped parsley.

Notes: For a vegan version, the dish would not suffer by leaving the cheese and yoghurt out or using vegan alternatives. For a gluten free version, you should leave out the facon - some smoked paprika can be used instead to impart a little of the bacon smokiness - and use corn tortillas rather than wheat tortillas.

On the stereo:
Bleecker Street: Greenwich Village in the 60s – Various Artists
Posted by Johanna GGG at 18:50