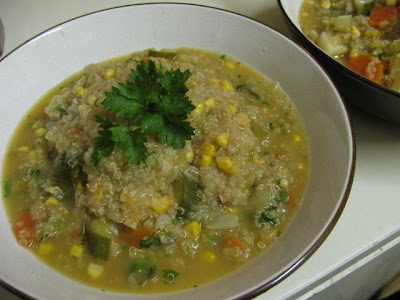 Last year when I first tried quinoa Lisa recommended I try her Quinoa Soup with Corn. And I did. It was very good. I had some lovely colourful red quinoa. I added a few vegetables and ate it for lunch. I dug out an old photo and it felt like a journey back in time to go through some old photos. 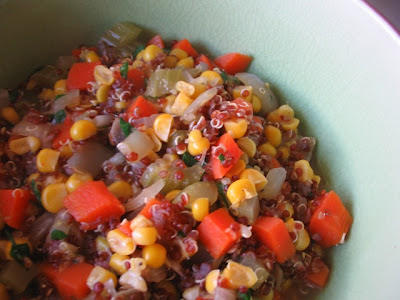 It was a soup good enough to blog but I felt I needed to try it again. That took me almost a year. Then a few weeks ago my sister Fran and my mum were coming over for lunch. I cooked up a big pot of it with lots of lurking vegetable from the fridge the night before. It is a good feeling to wake in the morning and have lunch ready to heat and serve. Fran brought over some lovely ciabatta. We heated up bowls of soup, cut big chunks of bread and chatted over lunch. 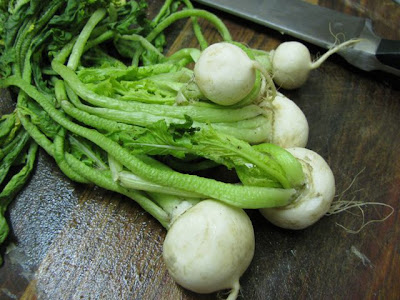 My mum noticed that the corn was fresh and commented on what a difference that made. I agree and feel that there could be even more corn in this soup. It was a great way to use up my cabbage, which gave it heaps of flavour, although after a few days it was a bit smelly, though still very tasty. I used herbs from the garden and some baby turnips that my mum had bought me in a moment of curiosity. The quinoa added a pleasing chewy substance. I did prefer the colour of the red quinoa but I don't think the colour affects the flavour. E liked it with a handful of grated cheese but I don’t think this is at all necessary as there was enough flavour without it. 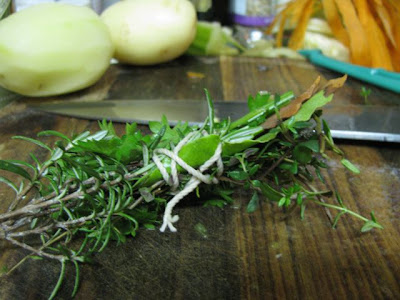 Lisa is right in advising that quinoa makes a great addition to a soup. So I am now returning the favour and sending it back to her for the No Croutons Required Event she founded with Jacqueline. This month Lisa is hosting and the theme is grains in a vegetarian soup or salad. I just know she will love it.

Fry onions in oil in a large stockpot for 3 minutes on a low heat. Add carrots, celery and cabbage, and fry for 7 minutes. Then add water, bring to the boil and simmer while you prepare the rest of the ingredients (in the order on the list), placing in the pot as you go. This should take about 20-30 minutes, some of which is while the water is coming to the boil. I placed the quinoa in the pot last and turned off the heat. Then I left it overnight and when I warmed it the next day the quinoa was cooked. If you want to serve straight away, you could add the quinoa in with the water and check it is cooked before serving. Stir the parsley in just before serving. Sprinkle with grated cheese if desired.

On the stereo:
The World of Michael Nyman
Posted by Johanna GGG at 21:50