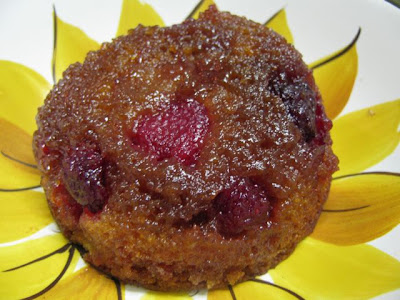 I may have mentioned once or twice that E’s favourite dessert is treacle pudding with custard. We had a similar version when I was young that I loved but my mum put jam in the bottom of the pudding dish rather than syrup. She recently told me that the ingredients are the same as for apricot sponge but with jam instead of apricots. We always called it steamed pudding but I have also seen it called college pudding.

I loved steamed puddings but it does take a considerable amount of time and some foutering about. Last year I tried making treacle pudding in the microwave but, as I mentioned in my previous post, I make things once and then when I go to revisit them months or years later, I can’t find the recipe. I did however find my photo (below). And a similar microwave pudding recipe can be found here. Mine was a bit dry so I felt it needed work and I am determined to try it again – I just feel it is an unnecessary luxury to make puddings over and over. Meanwhile, I was interested to find a baked treacle pudding recipe while browsing magazines in the library. It seemed easier than steaming so I thought I would give it a whirl. These puddings were good but there were too problems – the neighbours and the duplicity of the food photography in glossy magazines. 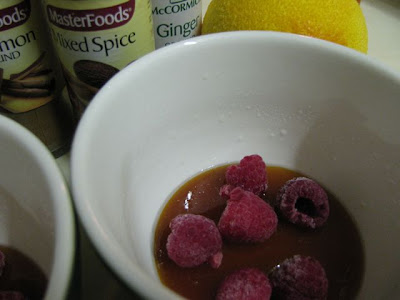 It is probably a couple of months since I made this and yet the night is still crystal clear in my memory. A Saturday that found us having a quite night at home in front of the television (as usual). Unfortunately our neighbours had decided it was party night.

On one side of us we had the hoons holding a 21st party, booming out retro classics that I remember being hits in their first journey round the charts (Abba, Gloria Gaynor, Village Men). That made me feel old. On the other side were the Greek neighbours who started quietly and got louder and louder. We could hear them dancing, yelling ‘opa’ and smashing plates. If we looked out the window we could even see heads bobbing up and down.

It reminded me of a party I attended as a student when the next door neighbour came over to join in and kept saying, ‘the neighbours are complaining, turn the music up.’ (I think I am telling you this to show that I once was the one partying instead of next door with my hands over my ears.) Only we wanted the music turned down from ear-bleedingly loud to a mere roar. Unexpectedly, it was the younger crowd who turned their music off first. 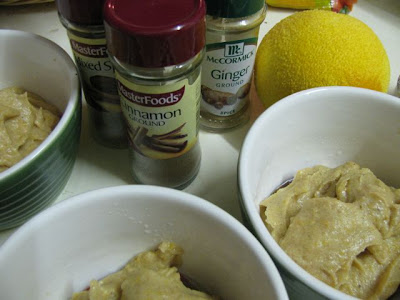 Add a crying baby into the mix, a cat trying to climb into the pram, and this was not the best night to indulge in pudding covered in custard. The stress was not even eased by watching our favourite British police show, the Bill. In fact the Bill has some of E’s favourite cockney phrases that would have been quite useful that night - ‘leave it out, guv’, ‘shut it, you slag’ and ‘he’s dun a runner’! Fortunately, we had leftovers for the following night which was enjoyed in a much more relaxed fashion.

So while I am having a whinge about the evening, I will share my gripe about pudding pictures. The photo in Delicious Magazine showed gooey berry syrup cascading down the side of the pudding. That is my image of treacle pudding. However, whenever I have made treacle pudding, the syrup soaks into the pudding. It happened when I made the microwave pudding, the steamed strawberry pudding and this treacle ginger and berry pudding. So the picture left me a wee bit disappointed. 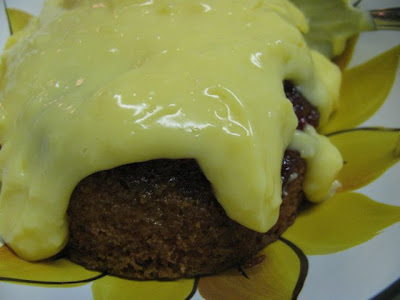 Outrageously loud parties and misleading pictures aside, the pudding was delicious. It was soft, sweet and warmly spiced. The custard was made while trying to calm Sylvia and consequently was a little lumpier than usual but we still covered the pudding with it. I am not sure that the berries made much impact – although I used raspberries rather than blackberries, which might have made a difference. I also didn’t have stem ginger so used ground spices. I loved baking the pudding in the ramekins. It was simpler than steaming, looked pretty and was easy to store leftovers. In fact, I imagine they would freezer in ramekins. I loved these puddings and hope to try them again in peace and quiet.

Preheat oven to 180 C. Grease 4 ramekins. Cut out circles of baking paper to line the bottom of each ramekin. Place a tablespoon of golden syrup and sprinkle berries on top of the syrup.

Cream butter and sugar. Add eggs one at a time, mixing after each addition. Stir in flour, zest and spices.

Divide batter among the ramekins. Cover each ramekin loosely with a piece of greased foil. Bake for 30 minutes or until a skewer comes out cleanly. Turn ramekins out into dessert bowls and serve with cream or custard.

On the stereo:
Down Colourful Hill: Red House Painters
Posted by Johanna GGG at 20:42