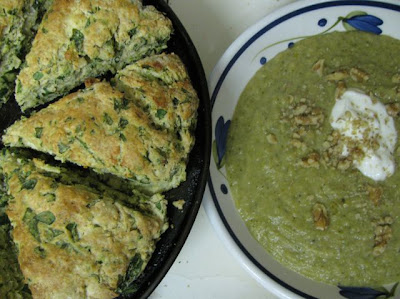 It has always been a bit of a mystery to me why sometimes we put bicarbonate of soda (a.k.a. baking soda) into some baked goods and baking powder into others. Of course I know that self-raising flour is made with 2 tsp baking powder to a cup of plain flour. I also know the bicarb soda is more fun because it froths up so easily. Only recently have I discovered that this reaction is why we use both these powders in baking.

There was a time when I didn’t use any commercial cleaning products. Just a sprinkle of bicarb and a squirt of vinegar created a wonderful fizzing reaction and was finished off by a little elbow grease. That was mostly when I was a student and lived in environmentally conscious share houses where we made our own laundry detergent, our own tofu and even cleaned our hair with the whey leftover from the tofu. I remember in one house some enterprising soul had heated a skewer over a gas stove flame and used it to pierce holes in the top of a (Jalna) yoghurt container to make a container for sprinkling bicarb. They had then used the hot skewer to make a hole in a plastic bottle top and put vinegar into the bottle so it would squirt vinegar. 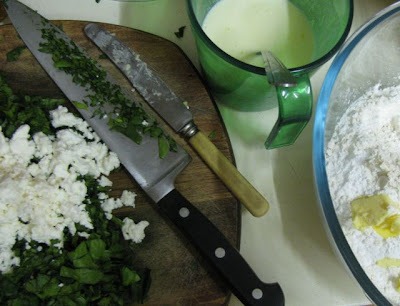 Then I went to an Enjo demonstration and was won over by the idea of microclothes eliminating the need for many chemicals, as well as reducing the amount of water and time needed to clean. (Thanks Kathleen) So now I have given the bicarb the heave-ho but confess I do use some commercial chemicals now.

My other use of bicarb is of course in baking. It made baking more exciting when I was little. I loved helping my mum make ANZAC biscuits or boiled fruit cake and watching the bicarb being added to the mixture. It delight me as it frothed up like fizzy drink.

I know that bicarb has a funny soapy taste and am careful when adding it to ensure that there are no lumps. (Although I don’t like sifting flour I often just sprinkle bicarb with my fingers to check there are no lumps.) A housemate once made a cake with the bicarb in lumps only to have others make faces at the taste. That experience told me to beware the bicarb. 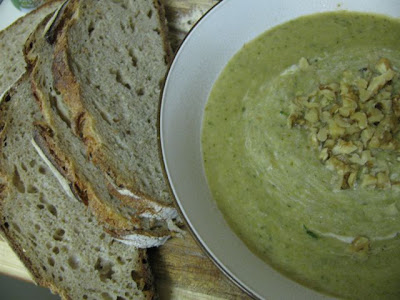 I am not sure where I heard about the difference between bicarb and baking powder – perhaps the radio – but it suddenly made sense. It was like my baking version of the road to Damascus. I found a few explanations on the web. The best one is from the Joy of Baking.

Bicarbonate soda is an alkaline leavening ingredient and needs to mix with an acidic ingredient to create the chemical reaction to make the food rise. Acidic ingredients include buttermilk, yoghurt, sour cream, vinegar, lemon juice, fruit, honey, molasses, maple syrup, cocoa (not Dutch processed) or chocolate. (Ah-ha – is that why some recipes suggest that we don’t use Dutch processed cocoa!)

Baking powder is a mixture of bicarb (alkaline) and an acid (such as cream of tartar). There is all sorts of interesting information about double acting baking powder (which is what most of us use now) so it reacts to liquid and heat at different stages, and cornstarch to keep the baking powder dry. Fascinating stuff. And useful information for when you aren’t quite following a recipe. 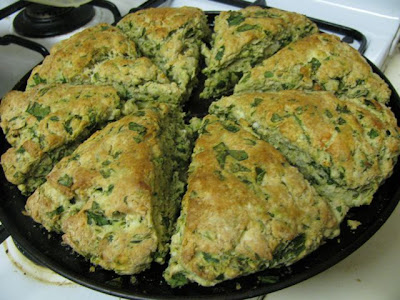 Not only has this information solved the mystery of bicarb vs baking powder but also the previously unexplained milk vs buttermilk/yoghurt decision. So baking powder and milk are neutral friends whereas bicarb and buttermilk or yoghurt react with each other to get a rise. Which is why soda bread has buttermilk in it. It makes sense of some of the baking I have been doing lately. It is all about balance.

I recently made spinach and feta scones which had both baking powder and buttermilk – just to show that they can still be friends. But now I have a little more understanding of these. However even without this additional knowledge I appreciated the lovely green appearance, the intense salty flavour of the feta, and the short buttery lightness of the scones. These are not the scones I grew up with - mine never had any egg or so much butter – but they are fantastic and worth trying. 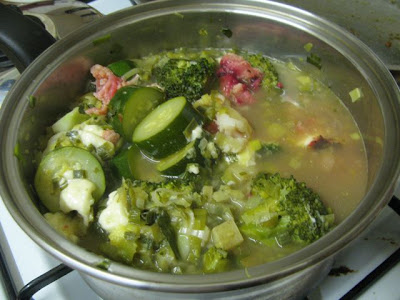 I had wanted to try these scones for ages but I finally made them to eat with a Broccoli, Zucchini and Blue Cheese Soup. It was a lovely marriage of textures and flavours. The soup used up some blue cheese I had as well as some leftovers of a cauliflower gratin with blue cheese that my mum had made for me. (It was made with cauliflower and beetroot but I ate all the beetroot as I loved the taste of that with the blue cheese but found the cauliflower a bit more challengingly intense.) I made a few changes, leaving out cream and adding some walnuts and yoghurt. 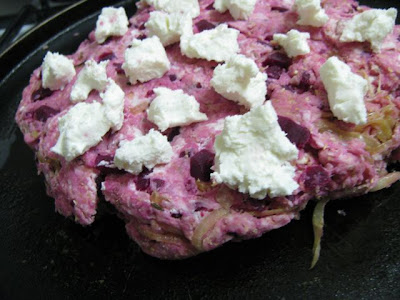 The only problem with the soup and scones was the lack of red, orange and yellow coloured foods. I love green foods but also love balance. Given that I have a large blog backlog, I thought I would also include a recipe for a beetroot, goats cheese and onion bread below that I served with Potato, Bean and Kale Soup recently. It was made because I suddenly couldn’t bear to have the tin of beetroot in my pantry any longer. But if I were to try this again I would prefer to use freshly grated beetroot. Nevertheless, it produced a pleasingly pink dough that become a golden bread with ruby studs of beetroot. Enough deep red to provide another option that would satisfy my need for some colour contrast with the soup. 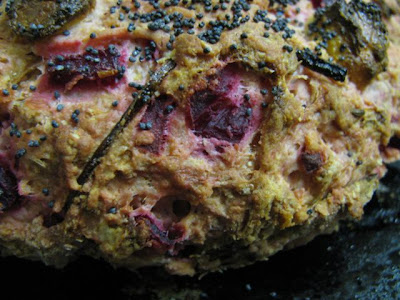 *The recipe called for 75g mild blue cheese. I am not familiar with blue cheese but the one I used seemed very strong so we used less. But if you don’t happen to have leftover cauliflower cheese about or if your cheese is mild, you might want more blue cheese.

Heat oil in large saucepan. Cook leeks for about 5 minutes. Add potatoes and cook about 3 minutes. Add broccoli, garlic, zucchini, stock and wine. Bring to the boil and simmer for 12 minutes or till broccoli is just cooked. Add blue cheese and cauliflower cheese, if using. Simmer about 2 minutes just to warm through. Blend. Serve with walnuts and yoghurt.

Preheat oven to 220 C. Lightly grease a baking tray. In a medium bowl whisk together buttermilk and egg. Prepare feta and spinach.

Mix flours and baking powder in a large bowl. Rub butter into flours until the mixture resembles coarse breadcrumbs. Mix in buttermilk, egg, spinach and feta gently til just combined and still a little shaggy. Turn out and lightly knead on a floured board just til dough is smooth(ish). It is quite a soft dough. Don’t knead more than you need or the lumps of feta disappear.

Gently flatten into a circle with dough about ¾ inch (3cm) thick. Transfer to a baking tray. Use a large sharp knife to score lines to make 8 wedges. Bake for 20 minutes until lightly golden. Then take out of the oven and cut into the 8 wedges along the scored lines. Return to the oven and bake for a further 20 minutes or until golden brown. (I think I returned mine for another 10 minutes to make sure it was cooked enough). Best eaten warm. Can be frozen and heated in the microwave.

Beetroot, Goat Cheese and Onion Bread
(adapted from this bread)

Place flour, salt and caraway seeds into medium mixing bowl. Mix in ⅔ of the cheese and onions. Lightly beat the egg, beetroot, 2 tsp oil, yoghurt and mustard. Add to the flour mixture and and mix everything together thoroughly until you have a sticky shaggy dough.

Transfer the dough onto a greased baking tray – use floured hands or just scrape it out with a spoon. Form into a rough round. Dot the remaining cubes of cheese over the surface, and sprinkle with poppy seeds. Bake for 45 minutes. Cool on a wire rack.

On the Stereo:
Assembly: John Foxx
Posted by Johanna GGG at 14:11