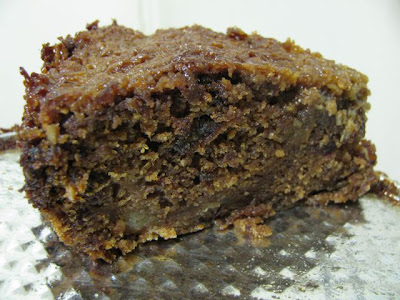 My mum brought me a generous wedge of an apple and date cake that she had made a few months back. She likes apple cakes more than I do but we both agree that this one is glorious! Soft, moist, dark and covered with a caramel and coconut topping, I wanted to eat it all at once. It was so good that I kept asking for the recipe till she remembered to bring it on one of her visits. I am sorry to say I didn’t get the name of the magazine that produced such a superb recipe.

I have made it twice over the last couple of weeks. It is the sort of cake that you want to pull down the blinds and refuse to answer the door so you don’t have to share it. And leaving the house when it is fresh out of the oven is very very hard. I made it just before having to go out and I left reluctantly. But it was probably just as well, because otherwise I might have been tempted to just keep on eating. And returning home to this cake is a joyous moment. 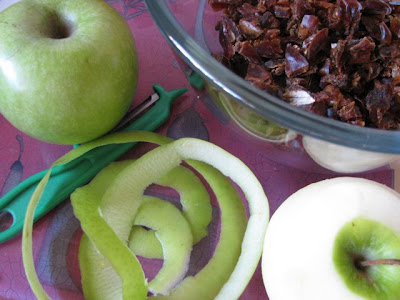 Think of just how soft and satisfyingly sweet sticky date pudding is. Then imagine mingling apples with the dates to soak up the caramelly goodness. Now instead of a toffee sauce that has to be prepared separately, there is a topping baked on. The topping is its crowning glory. It is crispy, crunchy, chewy and sweet. I actually left mine to bake a bit more because it looked uncooked but I think it actually cooks enough and will continue to cook as the cake cools. However I was told by E and Yav and Chris that it was deliciously crunchy. 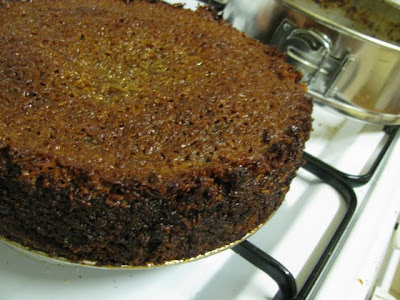 E loved it too. Much better than my chocolate cakes, he said. He preferred it warm with cream. But I just loved it soft and falling apart in my hand. It keeps quite well for a few days. Beyond that I can’t tell you. The first time I made it simply because it was just so delicious. I ran out of both castor sugar and plain flour when making it. I liked it so much with raw sugar and some wholemeal flour that this is the way I made it again last weekend. 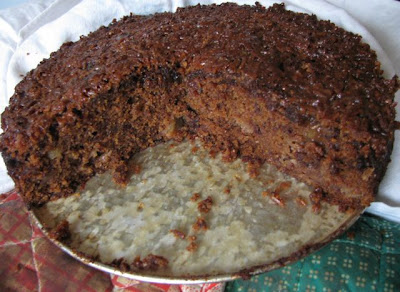 I had offered to make a cake to take to visit Yavanna and Chris, who had invited us to lunch. I made the cake the day before and exercised great self control in not sampling a piece before leaving home. We had a delicious lunch of quiche and salad and the best baked potatoes I have had for ages. Then, seated with a cuppa and a piece of cake, Yavanna and Chris were charmed by Sylvia playing on the rug. Meanwhile, Yavanna and Chris’s gorgeous cat, Mignon, charmed us. Isn’t she a bright eyed and bushy tailed sweetie! The cake was praised by everyone. 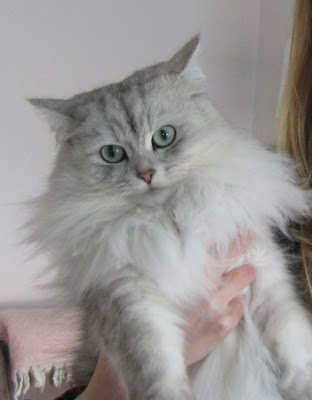 It was a pleasant and relaxing afternoon, catching up with friends. We left most of the cake with Yav and Chris, and returned home with a wedge that didn’t last long. I’d like to say that Zinc was as alert as Mignon, but she spent most of the evening curled up sleeping in a new spot, on the back of an armchair. 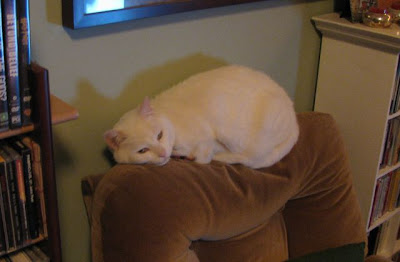 Apple and date cake
(adapted from a recent magazine)

Place dates, then apples in a small mixing bowl or large measuring jug. Sprinkle with bicarb soda. Pour the boiling water over them, cover and leave to cool. This took me about 1½ hours.

In a medium mixing bowl, beat together butter and sugar until pale and creamy (I did this by hand but you could do it with electric beaters). Beat in egg and vanilla essence. Fold flours and apple mixture into the creamed mixture in two lots.

Five minutes before the cake comes out of the oven prepare the topping. Mix all topping ingredients together in a small bowl and microwave for 1 minute. Or mix ingredients in a small saucepan over gentle heat til butter has melted and sugar has dissolved.

Remove cake from oven and spread the topping over the cake. Return to the oven for 15-30 minutes or until cake is cooked (when a skewer is inserted and comes out clean). The recipe says to cool in the tin. Apart from lack of self-control where a freshly baked cake is concerned, I found that the topping stuck to the sides of the tin and it helped to run a knife around the sides to loosen it soon after it came out of the oven. If you use a springform pan, you can carefully loosen the sides while it is still warm.

*Update: alternatively use half a cup of condensed milk, 60g butter and 2/3 cup of shredded coconut in topping to make lumberjack cake.

On the Stereo:
Reading, Writing and Arithmetic: The Sundays
Posted by Johanna GGG at 15:15