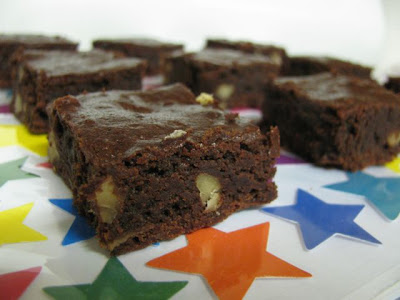 It was a busy weekend. My sister Fran was holding a housewarming party and my parents had a Sunday roast before they headed off on their trip to Europe. I couldn’t resist some baking.

I told Fran I would take along vegetarian sausage rolls. So I went shopping for ingredients and then baked in the afternoon. I had considered also taking along some gluten free brownies. I had an hour in which Sylvia slept before the party. It seemed just enough time to whip up the brownies. But they came out of the oven just before we headed out so I left them to cool. 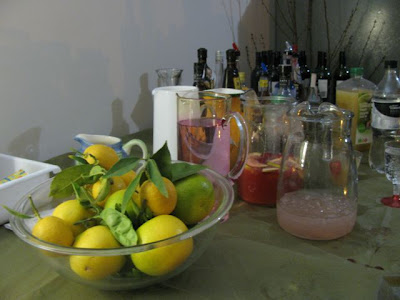 Fran is indeed the hostess with the mostess. There was a drinks buffet and my brother and friends playing live music in the garage. I found it a bit noisy and crowded. I often spend parties in the kitchen. In there were dips, crudités, chips, and a table of sweet treats for later. It seemed a good place to be. Trays of pastries came piping hot out of the oven and friends helped pass around large platters piled with the warm snacks. My sausage rolls went down well, and unfortunately disappeared before Fran got a chance to try them.

Unfortunately I missed observing the pizza making activities in the garage. But I did sample some of the vegetarian ones. They were delicious with a crisp slightly charred base and lightly topped with vegetables and cheese. I didn’t get photos but every time I looked Fran’s partner was either cutting up pizzas or running around the house with a huge plate of slices. 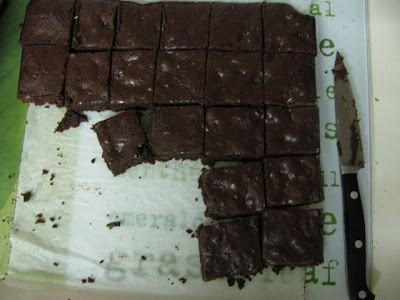 We didn’t stay very late so we missed sampling the dessert pizzas. But we were home in time to catch the Bill on the telly and were able to sample the brownies. They were good. E was not so impressed. He said he really is more of a caramel slice man. The next day Sylvia and I went to Geelong for one of my mum’s roast dinners. I took the brownies with us while E stayed at home with jelly dinosaurs. (He did finish my project of putting my CDs in alphabetical order as well as organising for an old computer to go out for recycling so I can’t complain about him staying home.)

It is always nice to have my mum’s roast. This weekend it was a bit chaotic with trying to get Sylvia to sleep when dinner was served. Babies don’t understand timing at all. But I was about for sweets. It was apple sponge. I noticed that it was darker coloured than the apricot sponge I made recently and asked why. She told me she puts cloves in the batter when making apple sponge. She also made a gluten free option for my sister, Susie, and niece, Grace. 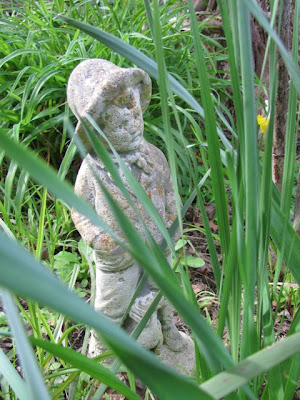 After lunch, we had fun taking lots of photos. My niece Quin is very creative and took charge of the camera. She had the little girls running at the camera and posing in the garden. Above is one of her photos that I found on the camera when I came home. Of course there were many photos of Sylvia. Below is one of what my brother Andy calls The Claw. 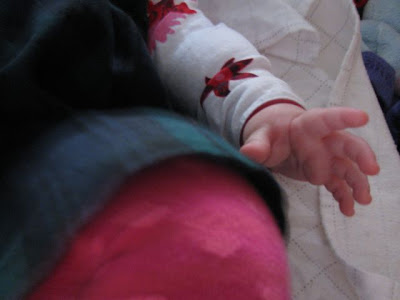 Susie and Grace, the GF ones, found the brownies too intense but my brothers enjoyed them. It was agreed by all that they were very rich. No wonder. They are full of chocolate, butter and cocoa. I also added a little wattleseed. The gluten free part is simply using chickpea flour rather than wheat flour. So simple and so good.

I found the recipe on Ilva’s Lucillian Delights blog via Lisa’s Kitchen. Ilva used hazelnuts. Lisa added cranberries. I had some walnuts that I couldn’t resist. Ilva got the idea when she saw another blogger using chickpea flour by mistake in a chocolate cake. You would never know they were gluten free if you weren’t told. You would just find them incredibly pleasing. They are fudgy and chocolatey. 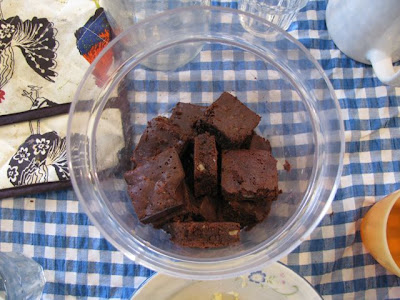 I get a little confused about chickpea flour because there is an Italian one called Farina di ceci and an Indian one called besan. I asked Lisa which one she used and she said the latter. I suspect Ilva used the former because she is in Italy. I have only come across besan and used this one. I have used besan in savoury muffins before I find the flavour quite strong. But I was once told that the flavour of wheat is missed in gluten free baking so it stands to reason that using strong flavours will compensate for the lack of wheat. Like Ilva, I am now interested to try chickpea flour in more baking, especially with chocolate.

Melt butter and chocolate together (I did it in the microwave but you could do it in a small saucepan over a gentle heat). Mix in sugar and eggs until it is glossy. Add remaining ingredients and stir to combine. The beauty of gluten free cooking is that you don’t need to worry about overworking the gluten. Pour into a greased and lined 22cm square cake tin. Bake at 180 C for 25 minutes. They are done when a skewer inserted comes out clean but they are better a bit too fudgy than a bit too dry.